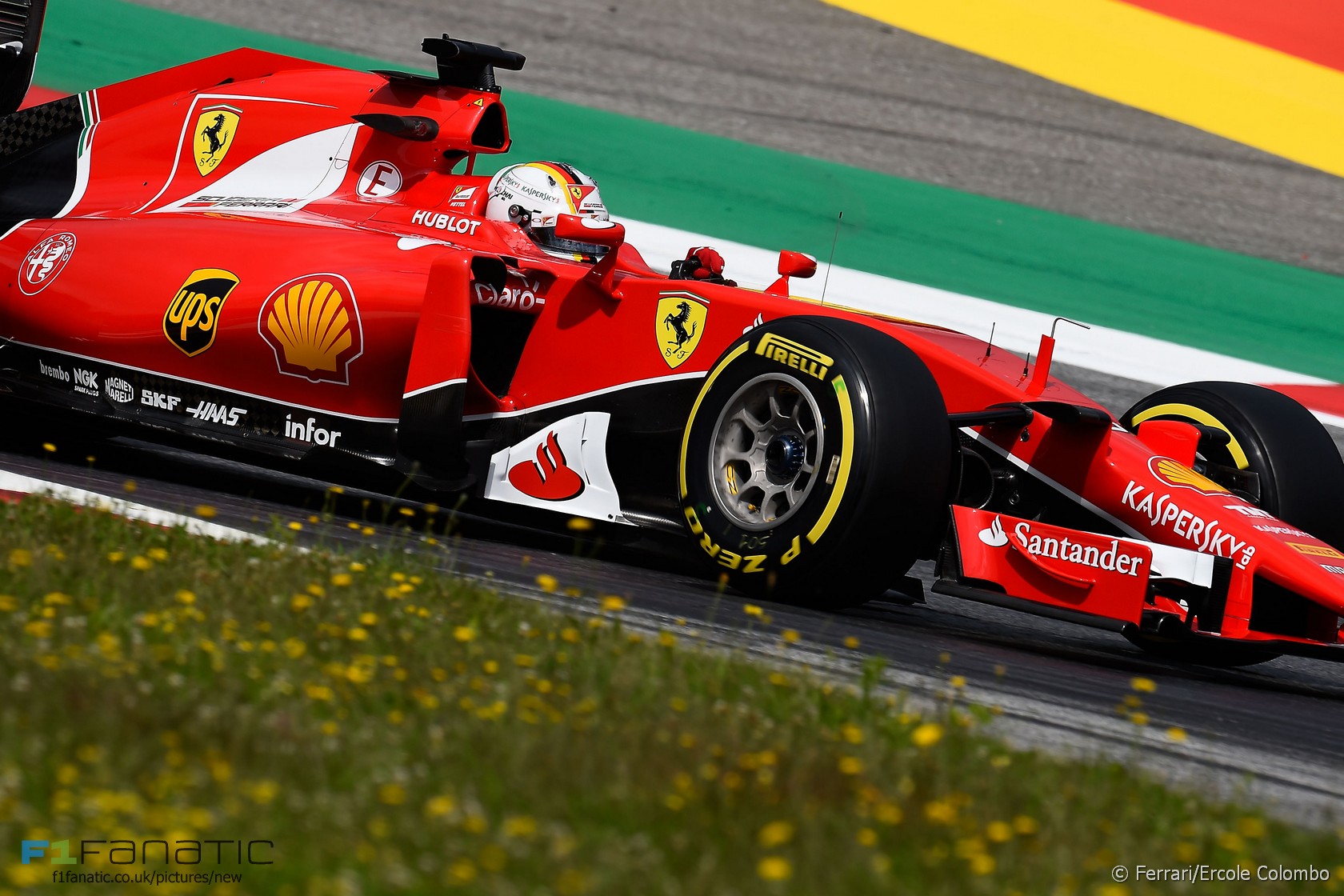 Ferrari ended the first day of practice in Austria with reasons to be cheerful even though it hadn’t been completely trouble-free.

Most of the team’s problems were located on Sebastian Vettel’s side of the garage, as his car stopped during each of the two practice sessions. However according to the team’s power unit director Mattia Binotto, the stoppages had different causes.

“The two problems are different,” Binotto confirmed. “This morning it was not engine-related, it was a problem related to the transmission on the back of the car. It is something that we have seen, we have analysed, we are confident to sort it out for the rest of the weekend.”

“While in the afternoon, it just happened, we analysed, apparently it’s on the gearbox but again we’ll try to analyse and fix it for the rest of the weekend.”

However there were two pieces of good news for Ferrari. This first was that they ended the day quickest of all – Vettel’s best lap on the super-soft tyres was 11-thousandths better than Nico Rosberg managed in the Mercedes.

The second, perhaps more significantly, was the speed Kimi Raikkonen demonstrated on his long run at the end of second practice. Ferrari’s pre-race preparation was far from ideal: Vettel had to park due to his gearbox problem and Raikkonen trashed his super-soft sets before he got to see how they would hold up.

Mercedes tried to push the pace beyond what Raikkonen was doing, but Hamilton didn’t feel it was possible. “Target 12.3 if possible,” race engineering Peter Bonnington told him at one stage. “I know I can’t get to that pace,” he replied.

Hamilton had a scruffy second session, ending up over half a second off the pace after several errors. “If you’re not making mistakes you’re not trying hard enough,” he said.

The Mercedes drivers did not seem as comfortable as usual. Hamilton responded to one radio request for a ‘strat mode’ adjustment by asking, “How many changes you guys want me to do? Can I just focus on driving?” Meanwhile Rosberg was once again asking for information his team couldn’t give him – this time regarding his target brake balance level for the first corner.

In pure lap time terms Austria always seems a tighter affair than at other venues simply because the track is so short. Today’s quickest time was under 70 seconds, and based on the lap time improvement seen in the first session there’s a slim chance Michael Schumacher’s 2003 track record of 1’07.908 could fall in qualifying.

But the shorter track also diminishes the importance of the performance gap between cars and punishes drivers harder for any mistakes. That’s how Hamilton’s slip-ups in qualifying 12 months ago paved the way for Williams to lock out the front row of the grid. The heavily upgraded FW37s were, as usual, not on the pace on Friday. Tomorrow should reveal whether they as well as Ferrari might be in a position to exploit any problems Mercedes might experience.

Off the back of their most competitive showing of the season so far in Canada, Lotus look set for another competitive weekend at a track which has also favours cars with top-end grunt. Force India have changed their power units this weekend and thus have access to the latest version of the Mercedes, and also look quick.

It’s not impossible we could see all eight Mercedes-powered cars in Q3. Red Bull are struggling again at their home track – Daniil Kvyat branded his car “undriveable” at one stage while Daniel Ricciardo’s ten-place grid penalty for a power unit change has now been confirmed.

Meanwhile at McLaren Fernando Alonso will take a twenty-place drop and Jenson Button also expects more penalties The pair were frustrated by myriad glitches throughout practice including a faulty electrical connection, gear selection problem and an ignition failure. McLaren racing director Eric Boullier said Alonso’s final stoppage in practice was merely a precaution: “there was no reported problem on his car”.