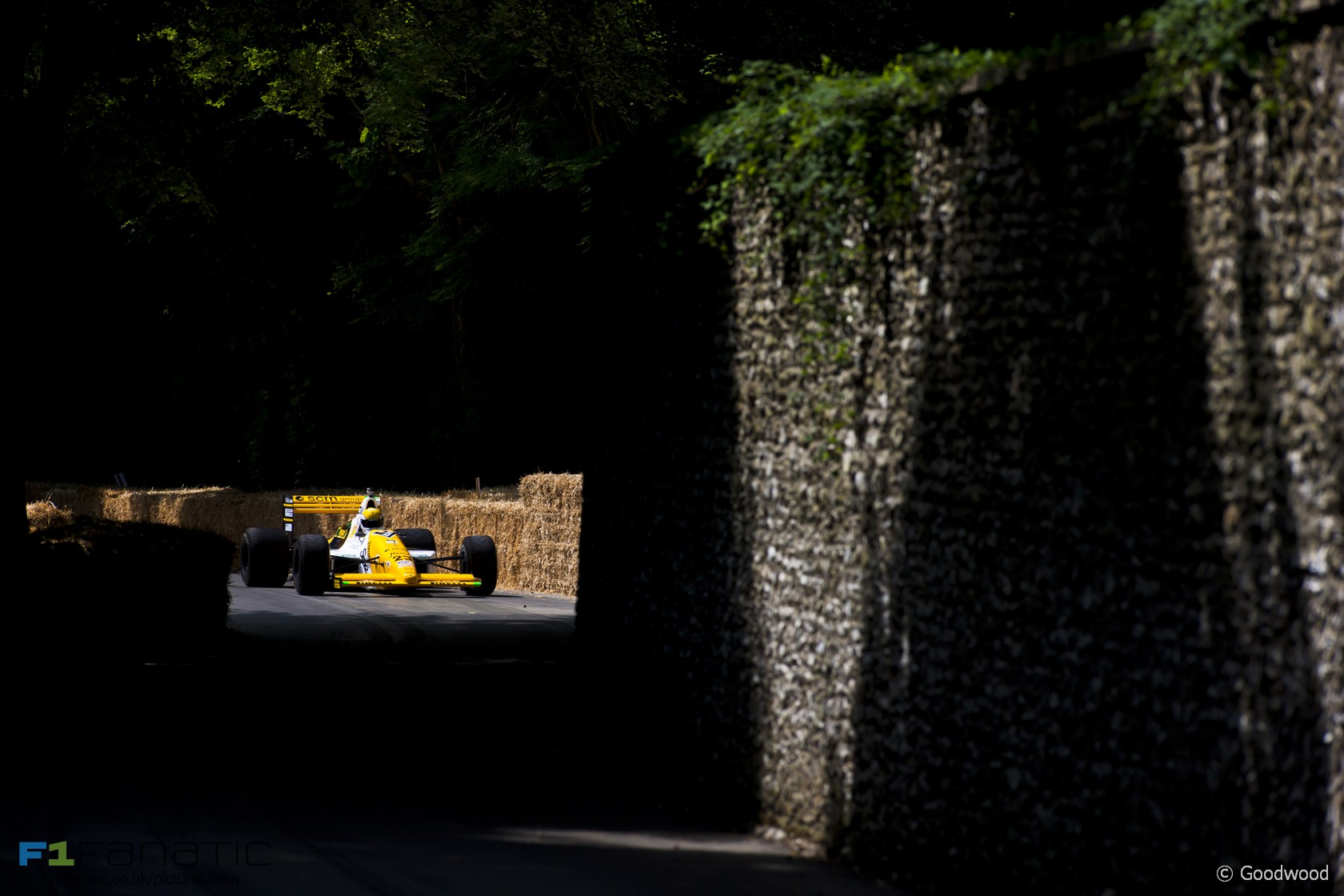 Minardi, the well-loved but ultimately unsuccessful team which competed between 1985 and 2005, raced over 26,000 laps in that time. That’s more than historic teams like Jordan or Ligier – and even modern powerhouses such as Red Bull and Mercedes.

[retrompuminardi01]But on only one occasion did a Minardi head the field of a grand prix. And only once did one of their cars line up on the front row. These auspicious milestones were reached by arguably the best car ever to come out of the Faenza factory: the Minardi M189.

Minardi entered Formula One in 1985 but failed to score a point in their first three seasons, most of which were spent with the unreliable Motori Moderni V6 turbo. For 1988, as F1’s last turbo era came to an end, the team switched to a normally-aspirated Cosworth engine.

While the team’s original driver Adrian Campos had some reservations about the M188 design – “completely shit” was his verdict – his mid-season departure paved the way for the return of the team’s most loyal driver. Pierluigi Martini, who made the majority of his 118 career starts with Minardi, immediately scored the team’s first point at Detroit.

But despite that breakthrough, change was afoot at the team. The M188’s designer, Giacomo Caliri, was shown the door. Among those hired to design the new car was Aldo Costa, the future Ferrari and Mercedes technical director, then aged just 26.

Costa and former Lotus engineer Nigel Couperthwaite collaborated on the design of the M189 which proved a much simpler and more effective machine than its predecessor. The team scored six points with it in 1989 – one shy of the best they achieved under the old ‘top six’ scoring system.

As with most Minardis, the M189 was an exercise in frugality. Having entered the first three races of 1989 with an updated version of their previous car, the M188B, the new chassis arrived in time for the Mexican Grand Prix.

In the first season following the end of the last ‘turbo era’, Minardi was one of eleven teams using the Ford-Cosworth DFR V8. The engine, descended from the 1967 DFV which revolutionised Formula One, was affordable and reliable if lacking the outright power to take on the factory-backed Honda, Renault (both V10) and Ferrari (V12) power plants which won races that year. The Italian team was also running on Italian rubber. Pirelli, however, had not won a race since 1986, and that did not change in another season where Goodyear again swept the board. Inconsistency was the major weakness of the company’s product – Minardi rarely knew when Pirelli would appear with a suitable tyre for the conditions and if they would have enough sets of its best compound for both the team’s drivers.

But the chassis the wheels were attached to was visibly slimmer and neater than its predecessors. As well as following the trend for shrinking the frontal area of the car, the M189’s subtly up-swept nose section was a distinctive innovation which contributed to its effective aerodynamics. Further packaging improvements at the rear of the car included situating the petrol tank completely behind the driver.

Despite the point picked up in 1988, which meant they were entitled to receive assistance with their travel expenses from Bernie Ecclestone’s Formula One Constructors’ Association, Minardi had still not ranked highly enough to escape the ranks of teams which had to pre-qualify for each race. The 1989 season saw a record 39 entries for some events – almost twice as many cars as today – and to preventing overcrowding on the tracks up to nine had to be ejected even before qualifying took place.

Martini never failed to make the cut but his generally slower team mate Luis Perez-Sala came up short in Mexico, France and Germany. A new chassis at the Italian Grand Prix featuring a slightly enlarged cockpit eased Sala’s discomfort at the wheel.

By then the team were free of the Thursday trauma of pre-qualifying. The M189s came good at Silverstone where Martini, despite an overheating car, led Sala home giving the team fifth and sixth places – Minardi’s first two-car points finish. Then came Portugal. Liking the feel of his car on Pirelli’s qualifying tyres, Martini put the M189 an impressive fifth on the grid, headed only by the vastly wealthier McLaren and Ferrari teams. Martini held his position early on, and as those in front headed for the pits one by one, when lap 40 came around car number 23 – Pierluigi Martini’s Minardi-Cosworth M189 – was leading the field.

Martini slipped back to fifth by the flag. He might have done better had his second set of Pirellis not proved considerably weaker than the first. While Ayrton Senna and Nigel Mansell took each other out as they disputed the lead, Martini was unable to keep Stefan Johannson’s Onyx from bating him to the podium, while Minardi’s former driver Alessandro Nannini took fourth for Benetton.

The giant-killing qualifying performances continued. In Spain Martini took fourth, and was running fifth when he spun off. Worse, he fell off the team’s truck in the paddock and broke a rib, which ruled him out of the Japanese Grand Prix.

Returning for the season finale in Adelaide, Martini scaled new heights with a ten-tenths lap which delivered third on the grid. However dire weather descended for race day, and Martini found Pirelli’s wet weather tyres little use. He salvaged sixth, but as neither of the cars which started in front of him finished the race, he and the team were left to wonder what might have been.

The M189 remained in service at the beginning of 1990 where it performed a final remarkable feat. Senna being beaten to pole position by new team mate Gerhard Berger in their first race together at Phoenix was one thing, but the appearance of Martini’s Minardi in second place made for a scarcely believable front row. In the race Martini slipped to seventh, just outside the points.

At the San Marino Grand Prix the team introduced its M190, an extensively overhauled design with minimal carry-over of parts from its predecessor. Not long afterwards Minardi made its bid to become a fixture among the front-runners by agreeing a deal to use Ferrari engines. But in the decade-and-a-half that followed until the team was bought by Red Bull and turned into Toro Rosso, they never recaptured the highs they had managed with the M189 and its humble Cosworth powerplant.

Pictures: Minardi M189 at the 2015 Goodwood Festival of Speed