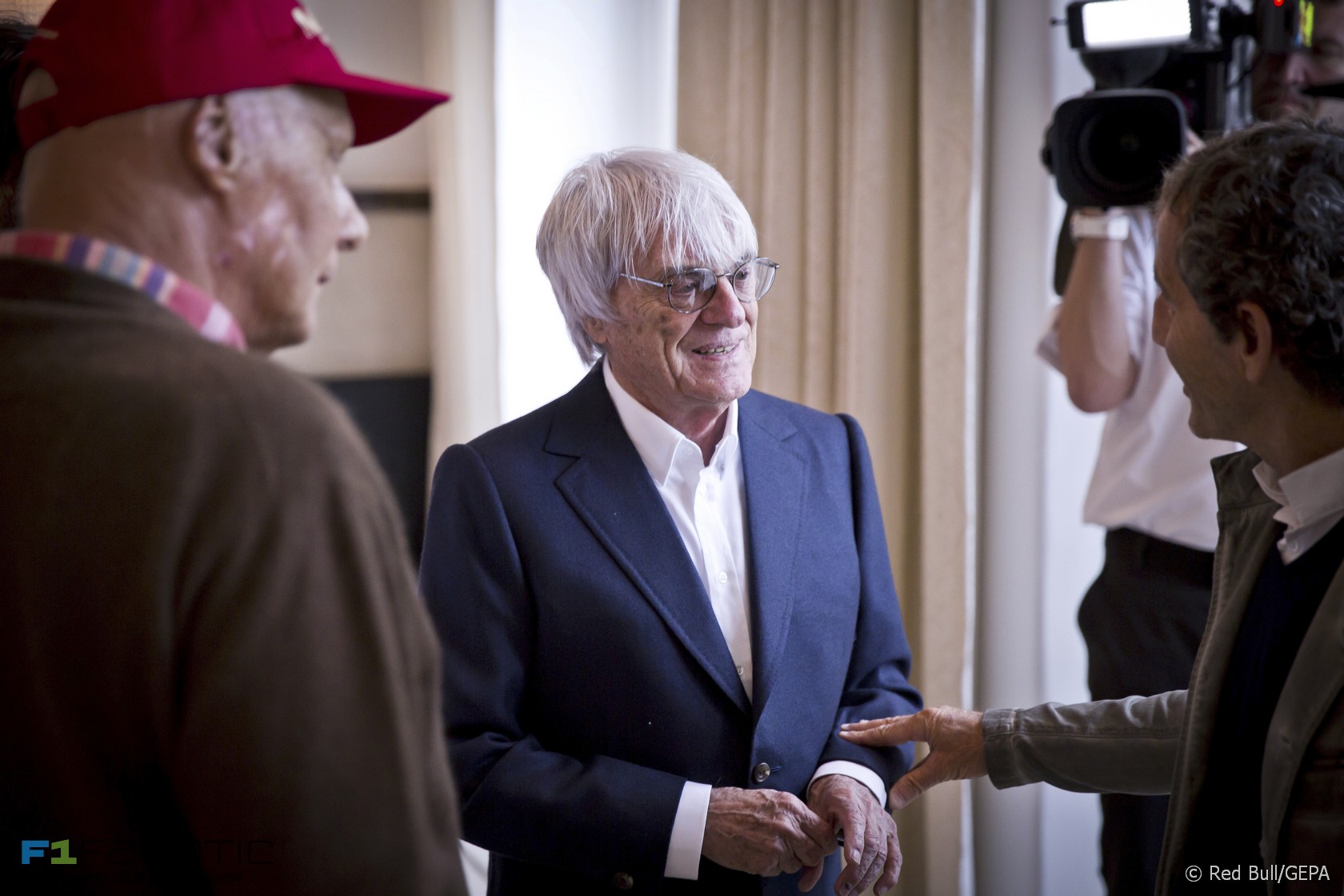 In the round-up: Bernie Ecclestone believes F1 fans’ understanding of the sport doesn’t extend as far as knowing how many cylinders the engines have.

"If you and I and go the grandstand and ask a spectator ‘How many cylinders has that engine got?’ one or two might get it right."

"At the time, we were looking to try and take over the ATP and run the tennis."

"Going into the pit lane like this, for no valid reason, is not allowed but the difficulty would be proving it was a clear breach."

"We definitely want to have drivers who are currently competing on the starting grid, people with experience."

"The reliability is almost fixed, but everyday there are small problems that pop up, but our main concern was to finish. Now we turn to the power side to get more competitiveness."

Michelin sure it can boost F1 excitement (Autosport)

"We simply believe in giving an opportunity to the driver and the engineers of the cars to extract the maximum possibility from each component, and with the driver being a very noble component."

"Obviously it is nice to be regarded by a top team like that - it’s nice to know there is interest from other teams as well. But I am with a top team too."

Mercedes may relent on engine development for good of F1 (Crash)

"Ferrari found that loophole, and it was clever how they did it. Now they say they have maybe opened a can of worms because it is expensive."

"I was just concentrating on people coming out of the last corner and it paid off because Kimi lost it, did a tankslapper and then half spun and caught it."

"Canadian billionaire Lawrence Stroll is rumored to be interested in buying a stake in Williams Grand Prix."

Nelson Piquet Jnr, who won the first Formula E championship last month, complains he is still most well-known for his involvement in Crashgate.

We're back on home turf for a filming day with the MP4-30 at Silverstone. Perfect weather for it. #RollCamera pic.twitter.com/KB0Bl5UJYn

Morning! Sorry for no tweets post British GP but it's taken me this long to get over the disappointment! PMA!, on to the next one. #JB22

Is Formula One overdosing on change when it needs consistency?

I’m starting to get worried about all this talk of changing the format of the weekend, etc… Formula One seems to be changing from an established sport with its heritage and history to an entertainment product that changes at the the whims of the noisiest detractors. The fundamental problems with F1 are known: unfair funding for teams, slowish cars (relative to some years) and slight lack of track action (sometimes!) – but now we want to change to everything else?

For example, why do we need a sprint race to finalise the grid (a suggestion that seems to be gaining some traction)? A car with good quality pace and poorer race pace will end up being demoted during the sprint and make ‘qualifying’ pointless, how will have the cars line up on the grid in order of race pace competitiveness help the race? This doesn’t seem to have been considered by the ‘powers that be’.

F1 needs to respect itself more, is it worth changing the DNA of the sport to pander to those who are bored? What would these same fans say if they were to watch races from the 70s/80s, a period regarded by some as the ‘golden age’ would we change everything then?

My fear is that we are becoming so convinced that F1 is broken, that the sport will ‘correct’ itself into a mediocre and ‘fake’ entertainment formula.
Josh

A superb start propelled Juan Pablo Montoya to victory in the British Grand Prix ten years ago today. But second place for Fernando Alonso meant he extended his points lead over title rival Kimi Raikkonen, who was third after his second engine change penalty in as many races.