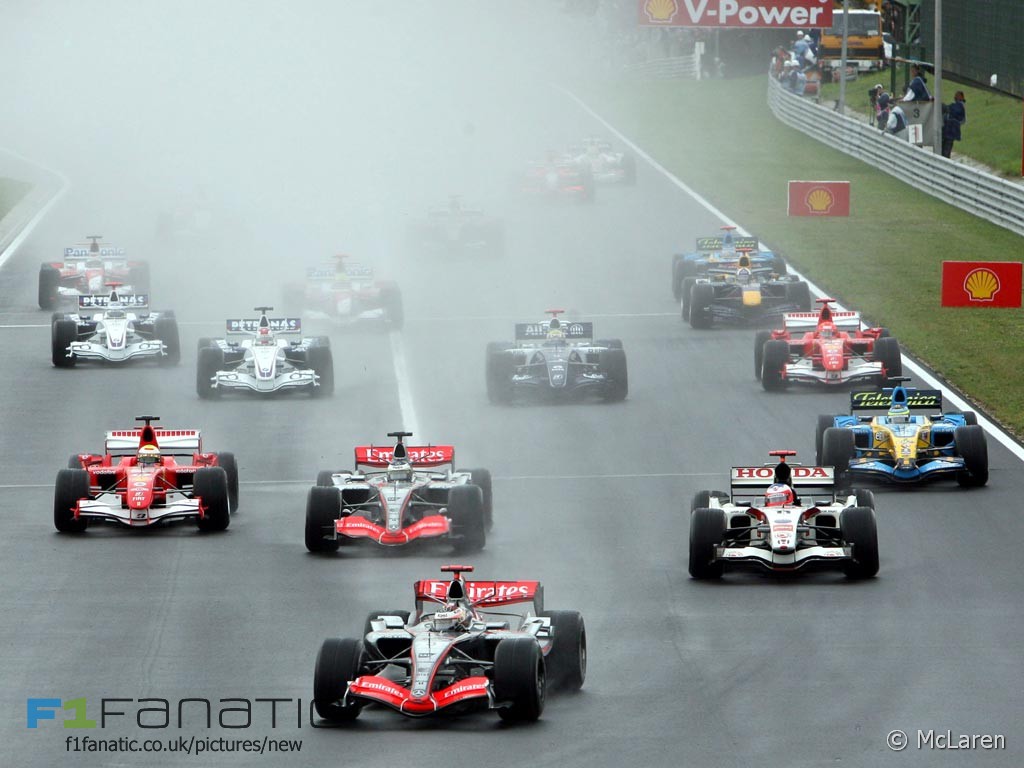 Fernando Alonso drove one of the greatest first laps of all time at a wet Hungaroring at the start of the 2006 Hungarian Grand Prix. Take a look back on some of the most memorable starts to Hungary’s round of the world championship. Over 200,000 spectators turned up to watch Nelson Piquet Hungary’s first round of the world championship in 1986. Twelve months later Piquet won again, but he only hit the front with six laps to go when team mate Nigel Mansell – who had led from the start – lost a wheel nut and retired. The Ferraris of Gerhard Berger and Michele Alboreto headed Piquet early on but also dropped out. The Hungaroring’s reputation as an overtaking-free zone had been cemented by the mid-nineties, making the opening seconds of each race especially crucial. Damon Hill won in 1995, leading every lap of the way in a rare triumph over Michael Schumacher at a track where Hill was usually at his best. The 2002 race was the last which used the original turn one configuration at the Hungaroring. Ferrari wrapped up another constructors’ championship but this time it was Rubens Barrichello was allowed to win, Schumacher having already sealed the drivers’ title. An odd-numbered grid spot was the thing to have in 2003. On a dusty surface following extensive redevelopment work at the track, the racing line offered far better grip and the extended run to turn one made a poor start more costly.

As the field accelerated out of the new, tighter turn one the top four places were held by the drivers who’d started first, third, fifth and seventh: Fernando Alonso, Mark Webber, Rubens Barrichello and Kimi Raikkonen. On a damp track in 2006 Alonso performed one of the greatest first laps of all time. A penalty due to a practice altercation with Robert Doornbos left him 15th on the grid, yet he rose to sixth by the end of the first tour. Raikkonen led initially but crashed into Vitantonio Liuzzi while lapping the Toro Rosso. Alonso later took the lead but lost a wheel following a pit stop and spun out. That left Jenson Button, who had started 14th, to claim his first grand prix victory. The Hungaroring was a hotbed of controversy twelve months later. Alonso had blocked team mate Lewis Hamilton in the McLaren pit box during qualifying in retaliation for Hamilton refusing to let him past earlier in the session. The stewards relegated Alonso from pole position to sixth on the grid: Hamilton took his spot at the sharp end and won the race, but Alonso’s fury had already set in motion a chain of events which led to McLaren’s expulsion from the championship. McLaren occupied the front row in 2008 but a superb launch by Felipe Massa from third on the grid got him around the outside of Hamilton and into the lead. He controlled the race until an engine failure three laps from home, which handed Heikki Kovalainen his only F1 victory.

Alonso took an unlikely pole position in 2009 driving the unfancied Renault R29. But in a repeat of the race three years earlier a pit stop error left him with three wheels on his wagon. A slow start by second-placed Sebastian Vettel allowed team mate Mark Webber into second, but behind him the KERS-boosted Hamilton and Kimi Raikkonen were on their way to the top two positions.

Red Bull owned the front row in 2010 but Alonso’s fast-starting Ferrari split the pair of them, exiting turn one with Vettel ahead and Webber behind. This proved to be a pivotal development: later in the race Red Bull opted to leave Webber out when the Safety Car appeared, putting him in the lead ahead of Vettel and Alonso. Vettel was then told to delay the field to help Webber come out in front of Alonso after his eventual pit stop. Vettel, however, slowed the field too much during the Safety Car period, earning himself a penalty. Webber won the race and moved into the lead of the drivers’ championship.

Vettel led from pole again in 2011 but this there was the added challenge of a wet track. The McLaren drivers scrapped hard but Hamilton held off Button for second. Behind them Nico Rosberg rocketed out of turn one, passing both Ferraris, and team mate Schumacher followed him through. Following an aborted start due to Schumacher stalling on the grid, Hamilton made the most of his pole position while Vettel’s attempt to pass Romain Grosjean ended up costing him third to Button. Hamilton was on pole again 12 months later, and once more Vettel was scrapping with Grosjean. After losing out to Vettel, Grosjean had to get his elbows out to keep Alonso behind at turn three. A turbo fire in qualifying robbed Hamilton of the chance to take his third pole in a row. On a wet track, Rosberg kept his advantage from pole position while Vettel was passed by Valtteri Bottas and Alonso. Meanwhile Hamilton, who had started from the pits, spun off at turn two. That might have been that, but a crash for Marcus Ericsson’s Caterham brought out the Safety Car which completely changed the complexion of the race.