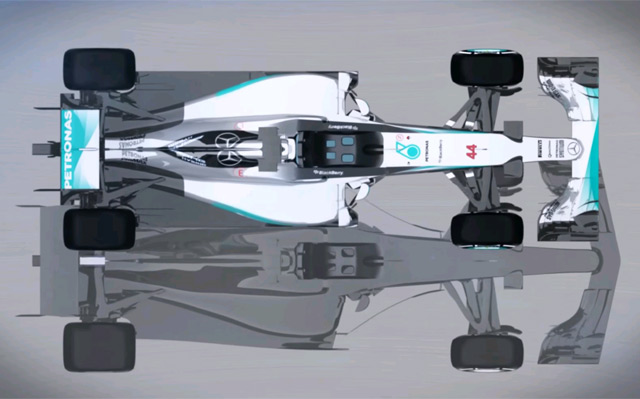 In the round-up: The plans for an overhaul of F1’s aerodynamic regulations have been revealed.

The 2017 cars will be wider than the current designs and have wider rear wheels. The rear wing will be lower and the beam wing, banned last year, will be reintroduced. The front wing will increase in width as well. The shape of the structure around the sidepods will also be defined by the rules.

"There is nothing in your mind other than driving, but out of the car of course it is disturbing when there are some rumours."

"What is your essential tip for the aspiring F1 driver? JB: Buy a football or a tennis racket. It’s a lot cheaper and you stick with the same rules!"

Formula One Opens The Doors To Its Inner Sanctum...For A Price (Forbes)

"At the upcoming Belgian Grand Prix a three-day Paddock Club pass costs $5,030 alone with the Friday evening paddock invitation a further $1,030 on top."

"It’s something that has been raised with Bernie, and as we see sometimes the calendar does move around a bit before October."

"When you’re thinking about selling a team, you won’t put any more money in at some stage because it’s all lost."

"Of course that has slightly compromised qualifying, some of it but not most of it is explainable for me."

"The driver market seems to open up in the summer break so I think it will definitely put me in the frame."

We just found model car nirvana. Which mini-McLaren would you pick? Thanks for sharing, Patrick. #MiniatureCool pic.twitter.com/NbKRhwk6qs IndyCar is using new LCD position displays next to the roll hoop from this weekend’s race at Mid-Ohio. A similar device was trialled by Force India at the end of last year: After a dreadful 2014, Sebastian Vettel is back to his best this year. What was behind his dip last year and recovery this year?

I think people underestimate the mental side of the sport. I don’t think Vettel’s head was in the right place last year and I think he was demotivated.

A combination of burn out after fighting for the title for the last four years (or even five if you include 2009), a less competitive car, which he knew would be the case before the start of the season due to both Renault and Red Bull being late with their preparations, and a disillusionment with the direction both the sport and cars were taking with the new formula.

I think he fell out of love with the sport for a while, you can also throw in the reliability problems (it was not just DNFs in races it was all the lost mileage and experience of the tyres from lost time in practice sessions as well), off track distractions such as Schumacher’s accident, becoming a father for the first time and later making a decision to leave for Ferrari.

I think he went through a period of self examination as to why he was doing this and decided he still wanted to drive in F1, the new challenge at Ferrari has also re-motivated him and he is now enjoying his driving again which is reflected this season in a return to the consistently high level of performances that he has delivered in the past.
R w

Patrick Depailler died 35 years ago today. The two-time grand prix winner was testing his Alfa Romeo in practice for the 1980 German Grand Prix when he crashed at the Ostkurve.

Also on this day 50 years ago Jim Clark won his second world championship title by taking his fifth consecutive win of the season the Nurburgring Nordschleife.

Here’s footage of the start of the race. Note the drivers rolling forward to their start positions, Formula E-style, and enjoy the close-ups of the moustachioed Graham Hill and fellow front row occupant John Surtees seconds before the start.