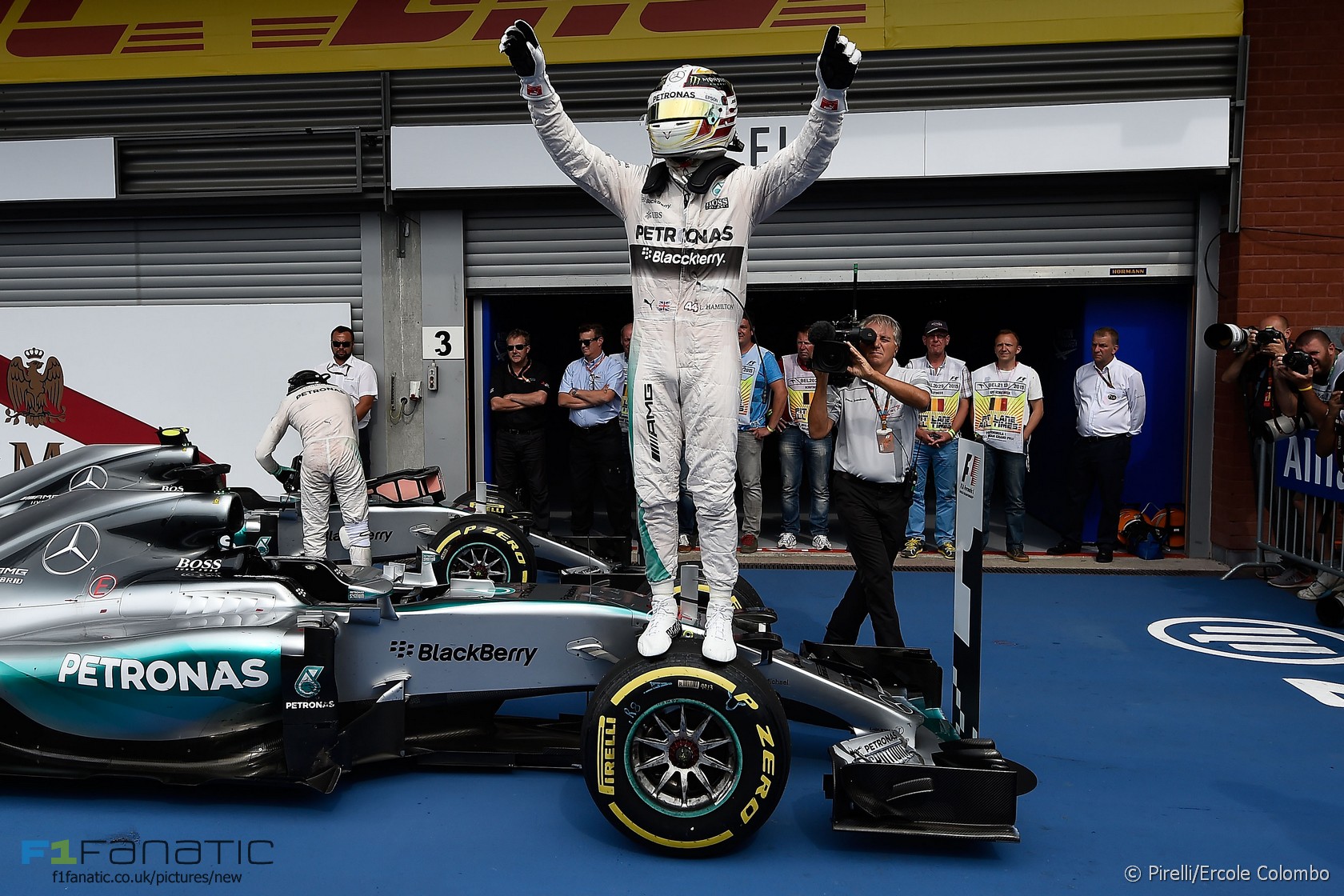 If there was a separate championship awarded to whichever driver generated the most column inches during the summer break, he would have won that just as dominantly as well. Certain newspapers with a broad definition of ‘news’ spent August regurgitating the contents of Hamilton’s Instagram account for the benefit of their readers.

Even Jenson Button’s burglary in the south of France failed to dislodge Hamilton as the principal focus of the media’s attention. Yesterday his latest social media offering – a video of him firing off an automatic weapon – became the latest cause celebre.

Hamilton had no need for such heavy weaponry when he took to the track, however. After Nico Rosberg got away slowly at the start of the race, he was rarely headed on the way to his sixth win of the season.

Perez surges at the start Pre-race talk centred on how the new communications restrictions would make life more difficult for drivers. The result was a slightly more variable start, if only because for the first time in four races Hamilton managed to convert his pole position into the lead.

It was the other Mercedes which got away poorly. Rosberg fell behind a trio of cars, headed by Sergio Perez’s fast-starting Force India. The VJM08 even nosed ahead of Hamilton briefly on the run to La Source but Hamilton protected the inside line, claimed the advantage, and left Perez behind.

Bottas had Rosberg filling his mirrors as they reached the chicane for the first time and left the inside open for the Mercedes. Even so Rosberg ran deep into the corner, allowing the chasing Sebastian Vettel to pounce on Bottas at La Source.

Neither Williams had got off the line well – Felipe Massa had lost three places, falling behind Vettel and the two Lotus drivers. As lap two began Pastor Maldonado suddenly lost drive on the Kemmel straight.

Team mate Romain Grosjean was following him closely at the time and had to take evasive action to avoid hitting the other Lotus. Just as on Saturday morning, when Kimi Raikkonen had slowed in front of him, his reactions and car control proved up to the task.

Rosberg didn’t make any further impression on the cars in front of him after that, but he didn’t need to – both Force India and Red Bull knew they wouldn’t be able to keep the Mercedes behind.

Ricciardo followed Perez for six laps, but even as the gap between them fell to little more than half a second and Ricciardo used his two shots of DRS per lap it was clear he lacked the straight-line speed to pass. Red Bull brought him in for a tyre change – reminding him to stay out if Perez came in – and switched to the harder medium compound tyres.

Perez responded on the very next lap, and although he briefly lost his position to Ricciardo he had switched to soft tyres, and easily reclaimed the place with the aid of DRS on lap 12. Rosberg, however, made his first pit stop at the end of the lap and came out ahead of the pair of them – though he had to defend his place from Perez.

Next Rosberg gave chase to Hamilton. The leading Mercedes was the second of the two to pit, and by lap 17 the gap between the pair was down to just over three seconds. It probably wouldn’t have got any lower had the Virtual Safety Car not been deployed a few laps later.

Despite his lack of straight-line speed Ricciardo looked to be in a strong position strategically – until his car abruptly failed neat the end of his 20th lap. In the Virtual Safety Car period that followed, Hamilton was surprised to see his team mate appear much closer to him than he expected. “How did Nico gain a second behind the VSC?” enquired Hamilton on the radio.

It didn’t matter. Once the VSC period ended Hamilton restored his advantage, and then some. By lap 29 he was five-and-a-half seconds to the good, and following his second pit stop shortly afterwards he could stroke the Mercedes home.

Perez, third, was already heading to the pits when the VSC period began. Grosjean also took advantage of the opportunity to pit while losing little time.

“I went through Eau Rouge on that lap and they just told me on the radio ‘Safety Car window is open'”, he explained afterwards, “and I did finish the lap and ‘safety car’ came up on the steering wheel and we pitted as planned”. Grosjean switched to mediums for his final stint while Vettel, who had taken the harder tyres at his first stop, stayed out. “They stayed on the one-stop strategy which was quite aggressive and we didn’t think we’d be able to do it.”

For a long time it looked as though Ferrari would be able to do it. Grosjean reduced a five-second deficit to Vettel to half a second, but with the laps ticking away he was sat in the SF-15T’s slipstream, unable to mount an attack.

Then on lap 42, Grosjean’s reactions were put to the test again: this time because of another sudden Pirelli tyre failure. Vettel’s right-rear tyre let go moments after he crested the rise at Blanchimont – had it happened seconds earlier he would have suffered a monumental accident.

This was the second major tyre failure of the weekend follwoing Rosberg’s blow-out on Friday. It prompted a furious response from Vettel and, hours later, Pirelli reacted by stating that its demand for limits on stint lengths two years ago should not have been rejected. Vettel’s drama handed the final podium place to Grosjean. A late pit stop for Daniil Kvyat paid off handsomely: hs extra grip more than made up for the Renault’s lack of grunt, and he picked off Massa and Perez on consecutive laps to claim fourth ahead of his two rivals.

The second Williams fell out of contention after a bizarre error in the pits. Bottas was sent on his way with three soft tyres and a single medium compound tyre, which earned him a drive-through penalty. He’d been struggling for straight-line performance anyway, but without the penalty would surely have come home higher than ninth.

Ahead of him were two drivers who’d worked their way up from the back Kimi Raikkonen, seventh, and Max Verstappen. The latter had put an audacious pass on Felipe Nasr, running onto the run-off at Blanchimont. But his attempt to take Raikkonen at Les Combes on the final tour did not come off, and he had to settle for eighth. Marcus Ericsson took the final point.

Spa has not always been a kind circuit for Hamilton. He was stripped of victory in 2008 following a highly contentious stewarding decision. Three years before that he was disqualified after winning a Formula Three race at the track due to a minor technical infringement.

Going into this weekend he was asked if the venue was his favourite, and gave a blunt “no”. Perhaps today’s commanding win, which has moved him more than a victory clear of Rosberg in the championship race, he give him a little more affection for one of F1’s great venues.