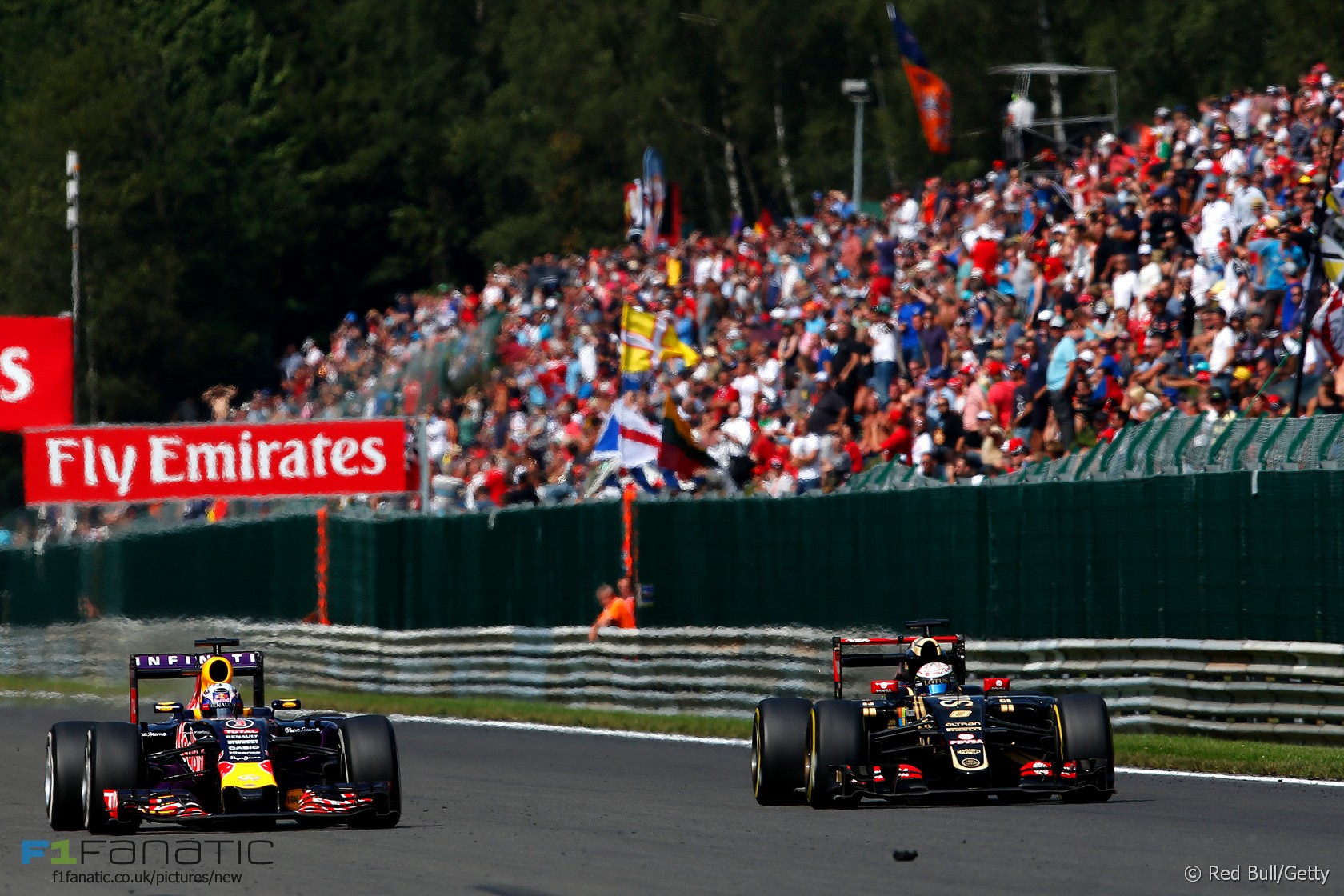 The Belgian Grand Prix was rated higher than most races this year, as Lewis Hamilton romped to his sixth win of the year and Sebastian Vettel lost his chance of a podium after a late tyre failure.

But there was palpable frustration at two aspects of the race among fans: the continued abuse of the track limits at Spa-Francorchamps, and the ease with which drivers were able to overtake due to DRS.

Following their Hungary blip Mercedes returned to winning ways at Spa, and the ease with which the silver cars led the field home prompted different responses:

There were good battles all around to cover. Great story of Grosjean and Perez. Spa is always gorgeous to watch, from the scenery to seeing the cars blasting though the trees from Pouhon to Blanchimont — it’s like the ideal image of road racing.
DaveW (@Dmw)

No fight for the lead at all. What is going on with Rosberg? It’s like he’s perfectly fine to play number two. As a demonstration of technical dominance and excellence it’s astounding to see both Mercedes go round one-two all the time but as a viewer it’s pretty dull. Even a sluggish start from Rosberg didn’t change much.
Adam (@Rocketpanda)

Williams made an unusual error during the race when Valtteri Bottas was sent from the pits with three soft and one medium tyre on his car. Although he was swiftly penalised, some were surprised he wasn’t also told to change tyres.

What I didn’t understand was why race control tolerated Bottas’s stint on a mix of compounds. I think they should’ve waved the black and orange flag, ordering the team to correct their mistake ASAP, then adding a penalty (in that case, five seconds would’ve done the job). Allowing the car to stay on the track although it clearly had an illegal configuration felt wrong to me, even taking into account that there was no advantage to be gained from it. It was a bit farcical, but I don’t know if that bothered anyone else, or if I’m just splitting hairs.
@Nase

Good race, strategy made it interesting, Spa made it even better, DRS made it worthless.
Hahostolze There were far too many comment criticising how DRS affected the race at Spa to include all of them.

I’ve seen worse but practically every overtake was identical thanks to the WWE/DRS rules. Back in the nineties my favourite races would be those where one could overtake, nowadays it’s the other way around; Monaco, Hungary etc… During my time F1 has improved in many areas, such as qualifying which is much more television-friendly, particularly in countries where adverts need to be part of the broadcast. As for the engines they haven’t quite got it right yet but they needed to go in the green direction so I don’t want to be too critical other than they let costs go completely out of control. I’ll still give them time to get this right.

For me DRS is the worst thing that’s happened on a sporting level. I understand why it appeared and I salute the bravery in implementing such a fundamental rule change but, for me, it’s been a disaster.
Adam James (@Cevert73)

[DRS] was way too powerful today. The defending driver had zero chance to defend and just had to sit on the side and watch the faster car just stream past. It ruined a lot of the battles that could’ve been.

DRS is necessary at some circuits, but Spa is not one of them.
Chris (@Tophercheese21)

DRS overtakes into Les Combes are just a bore-fest. The overtake is done well before the end of the straight. The slipstream is strong enough to give cars a pull and then a test of a drivers skill is actually involved without DRS to secure an overtake.
@AmbroseRPM

Are the FIA still trying to ‘calibrate’ DRS appropriately at each race? There used to be a lot more talk of changing the lengths etc… but if they do still tweak them they keep it a bit quieter.

Anyway, DRS is spoiling the sport too much now. I can just about accept it at circuits where it’s historically difficult to overtake, but I don’t need it crapping up the circuits where you normally get a good race regardless and I can write most of those races down at the start of the season.
Robert McKay The FIA attempted to prevent drivers cutting the track at the top of Raidillon by installing a new kerb, but it was removed after Friday practice following complaints from the drivers. That wasn’t the only part of the circuit where most if no all drivers were seen putting four wheels beyond the track limits.

Despite a pre-race warning that drivers would be reported to the stewards if they went off-track and were “suspected of gaining an advantage”, no penalties were issued, although Daniil Kvyat was given a warning about leaving the track during the race.

One thing that did annoy me over the weekend was that most drivers seemed to be routinely cutting the kerb and going of track to gain an advantage at Raidillon and yet nothing was done. It may be the case that they cannot put big kerbs there to stop this because of safety concerns but I think something should be done.

After the race when Vettel was speaking about his tyre failure he said that he didn’t go off-track, and yet I seem to recall seeing footage showing that he was one of those who regularly had all four wheels outside of the white line, do the drivers not consider that as going off track any more?
@PJA

A race not without incident but fairly short on action, Verstappen’s overtake being the memorable positive incident. Like many others I’m frustrated about drivers exceeding track limits and the stewards not taking a tougher stance. Vettel constantly put gravel on the track by doing so at one corner yet nothing was done.
@GregKingston

No need to overtake anywhere else on the track because you just wait until the DRS zone.

It’s been this way for the last five years at Spa or whenever it was DRS was introduced. I truly despair at the stupidity of this gimmick and those behind its introduction and continued use.
@John-H

I was really surprised the stewards did nothing about the track limits in this race. About five cars went off at the exit of Eau Rouge (cutting the corner by a foot or so) including Hamilton. Almost all drivers exceeded track limits at some point in the race at various places and not one penalty.

I’m much more annoyed at that than DRS. Either redraw the lines or enforce the rules. As for DRS it was definitely excessive here.
@Rick2k9

If that is the best that F1 can do at classic circuit that almost always produces great racing in every category then F1 is in real trouble.

Epic, last of the late brakers, overtakes into Les Combes are a thing of the past, DRS has completely destroyed that. And may as well remove Radillon and make it straight as barely saw a driver do anything but straight line it all race. What a joke.
@Lopek

26 comments on “Track limits and DRS raise ire at Spa”