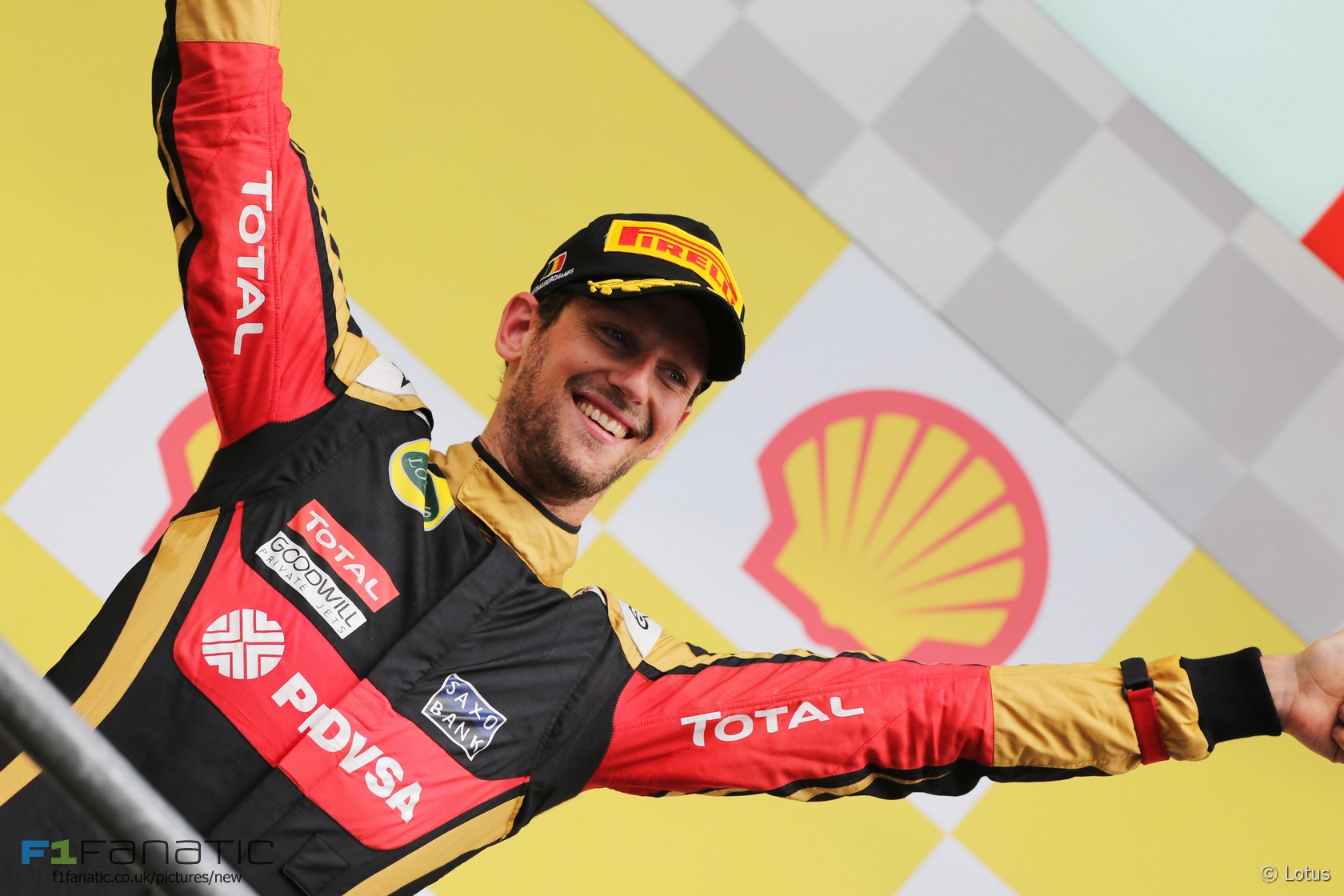 More than half of F1 Fanatic readers voted Romain Grosjean the Driver of the Weekend for the Belgian Grand Prix after he took his first podium finish of the season.

The Lotus driver was consistently one of the quickest drivers on track during the race. He held fourth place in the closing stages when Sebastian Vettel’s tyre failure gifted him third, but Grosjean believed he had a good chance of passing the Ferrari anyway.

Grosjean’s win marks the first time he’s topped the Driver of the Weekend poll since the 2013 Japanese Grand Prix, and makes him the seventh different winner this season from eleven races.

As usual, Grosjean missed out the first practice session on Friday as the team gave further track time to reserve drive Jolyon Palmer. When he did finally get out on track in second practice he ended up with the seventh fastest time, 0.3 seconds shy of the quickest non-Mercedes.

Saturday got off to an unpromising start: Grosjean was only 16th in final practice following an alarming near-miss with Kimi Raikkonen, who slowed in front of the Lotus on the approach to Blanchimont.

It came good for Grosjean in qualifying, however, as he produced the surprise of the session to qualify fourth on grid – unfortunately, a gearbox change penalty meant that became ninth place.

In the race he started well and picked up a place when team mate Pastor Maldonado clattered a kerb too hard and retired. Grosjean’s pace was especially strong in his second stint – more often than not showing as the quickest non-Mercedes car – as he dispatched Daniel Ricciardo and Sergio Perez on his way to battle for the podium.

Whether Grosjean would have finished on the podium without Vettel’s tyre blow-out is something we’ll never know – but taking Lotus’s first rostrum finish since 2013 was certainly a just reward for his efforts.

Couldn’t have qualified higher, couldn’t have finished higher. Drove a clean race, had a brilliant strategy. Ten out of ten for the Lotus driver.
@jeff1s

Grojean for me, he had a bit of luck but despite a penalty he still managed to drive a great race and put his car much higher than anyone expected.
@glynh

For me, obviously Romain Grosjean. He once again out-qualified his tea mmate, and unfortunately had to serve a five-place grid penalty for a gearbox change. That didn’t affect him though! He drove a superb race, making his way up to fourth, all over the back of Vettel until his tyre exploded. He deserved third more than anyone else in my opinion, including Vettel. If it wasn’t for the penalty, Vettel would have been nowhere near Grosjean.
@ultimateuzair After once more dominating his team mate when it mattered, Lewis Hamilton was highly rated again.

In the end the sheer gap Hamilton achieved in qualifying and the measured way he won the race by only as much as he needed to on during a weekend where tyres were a concern and his engine is probably nearing it’s end of life. The performance couldn’t have been any better.
@philipgb

Max Verstappen was another driver whose starting position was compromised by a penalty – his due to an engine change – but the Toro Rosso driver impressed again with his overtaking moves:

Max Verstappen. His last stint was faster than anybody else bar Mercedes. On lap 33-42 he was only 0.22 second off Lewis pace in average.

Bonus point for all his exiting overtakes.
@ruliemaulana

Nico Rosberg and Grosjean’s team mate Pastor Maldonado were among those with no votes at all however, while Spa-master Kimi Raikkonen picked up just 1% and fifth placed Perez only picked up 7% of the vote, much to the surprise of some.

Perez for me too, I’m surprised he has so few votes. Grosjean was more or less matched by Maldonado until he retired which would suggest Lotus were much quicker than expected at this track. Considering how he spent most of the race defending I would say Perez out-qualified the car’s potential significantly, then held onto what places he could.
@george

While Vetttl earned some praise for his efforts:

It has to be Vettel . The man was so fast he blew his tyres off.
@johnmilk

14 comments on “Podium earns Grosjean Driver of the Weekend win”