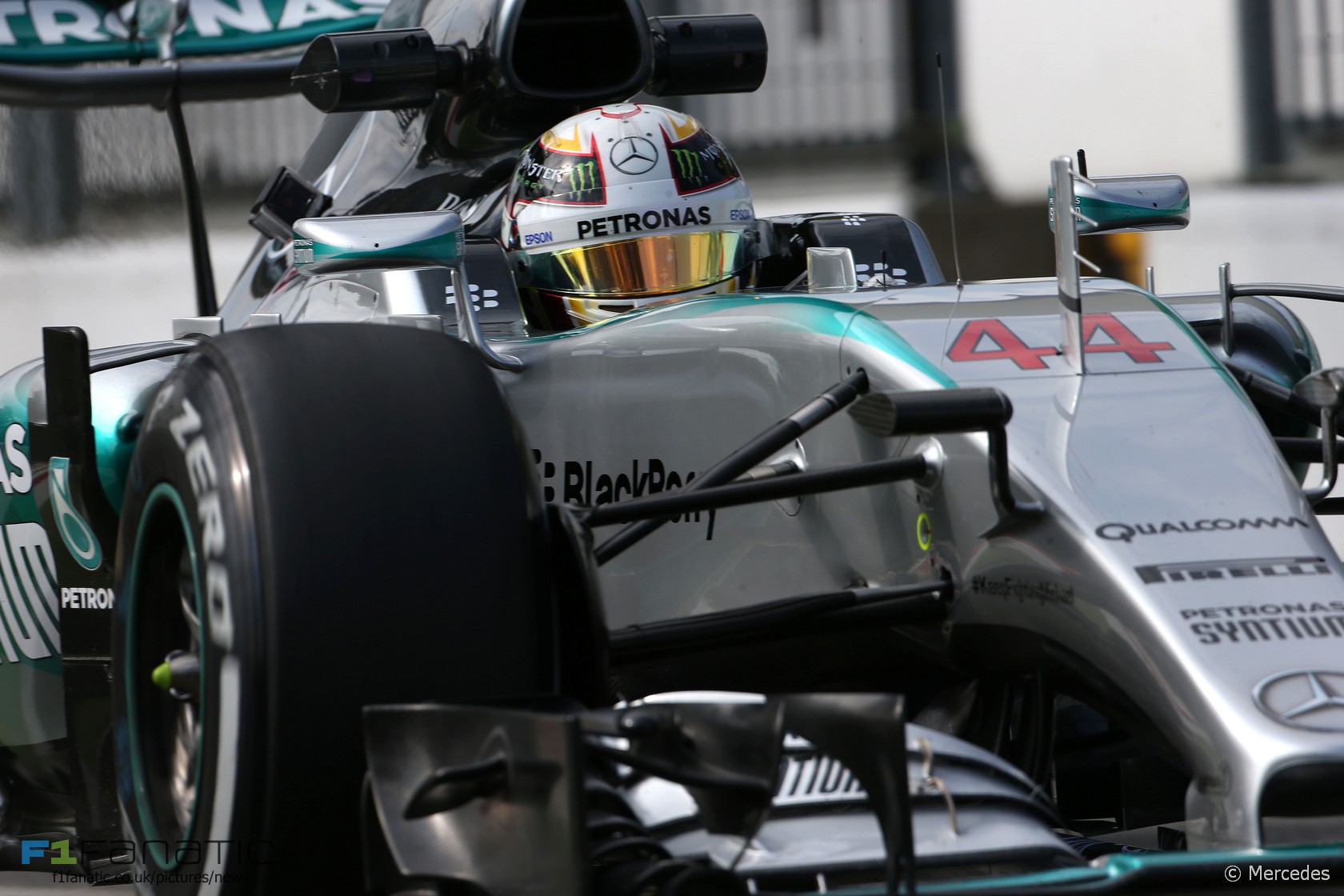 Lewis Hamilton took his record-equalling seventh consecutive pole position in a single season at Monza ahead of the Italian Grand Prix.

But it will be the Ferraris of Kimi Raikkonen and Sebastian Vettel – not Nico Rosberg – who will line up behind the championship leader tomorrow after a strong home performance by the Scuderia.

Rosberg will start from fourth on the grid, with the Williams of Felipe Massa and Valtteri Bottas behind.

There was trouble for Nico Rosberg before the session began, with Mercedes changing the new engine on Rosberg’s car back to the unit used for the Belgian Grand Prix.

After the damp start to practice, the Monza circuit was done dry at the start of qualifying. Both McLarens and Manor cars wasted no time in putting the Soft tyres onto their cars.

Nico Hulkenberg was one of the first drivers to set a timed lap, but the Force India driver was clearly held up by the Sauber of Marcus Ericsson into the Parabolica. The stewards will investigate the incident after the session.

Technical issues appeared to have sidelined Daniel Ricciardo and Max Verstappen, but Red Bull were just able to get Ricciardo out onto the circuit in the dying minutes for a single flying lap with Verstappen out too late to begin a timed run.

This left McLaren and Manor to battle it out to try and make it into Q2, but with Ricciardo able to go P14 with his only flying lap both McLarens and both Manors were ultimately eliminated with Jenson Button qualifying ahead of team mate Fernando Alonso and Will Stevens beating Roberto Merhi in the battle of the Manors.

There was late drama as the chequered flag fell when Max Verstappen’s engine cover suddenly ripped off his Toro Rosso under power in the Curva Grande, littering the circuit with large chunks of carbon fibre debris. Thankfully, this did not interfere with any drivers’ final laps and the circuit was cleared before Q2.

As the second session began, all teams opted for the faster soft compound tyres. Nico Rosberg was the first of the Mercedes to put in a flying lap, but Lewis Hamilton immediately eclipsed his team mate’s effort by over seven tenths.

Then it was the turn of the Ferraris to make their first runs on the soft tyres, with both Sebastian Vettel and Kimi Raikkonen able to split the two Mercedes on the timing screens to the very vocal approval of the Tifosi.

Neither Mercedes opted for a final run in the closing stages of the session, but Sebastian Vettel did improve to P2, just over a tenth slower than Hamilton’s benchmark.

In the closing minutes, many drivers were still yet to set a time, choosing to do just a single timed run. Carlos Sainz and Daniil Kvyat were unable to break into the top ten on their one flying lap.

Pastor Maldonado just missed out on an appearance in Q3 after being beaten by Nico Hulkenberg’s Force India by less than a tenth, while Marcus Ericsson put his Sauber into the final session – a feat his team mate, Felipe Nasr, was unable to emulate. Daniel Ricciardo did not set a time in the second session.

Nico Rosberg was the first of the Mercedes to make an attempt at pole position, posting a 1’23.942, but was immediately beaten by his team mate, Lewis Hamilton, who lowered a 1’23.297 to take provisional pole

Once again it was the Ferraris of Vettel and Raikkonen who were closest to the championship leader’s time, both just over three tenths adrift of Hamilton, with Felipe Massa quicker than the second Mercedes too.

After his first attempt of the session, Nico Hulkenberg’s Force India slowed to a halt at the entrance of the pit lane, ending his qualifying with an apparent mechanical issue.

The final shoot-out for pole saw the two Ferraris of Vettel and Raikkonen first to cross the line, with Raikkonen jumping ahead of his team mate by less than a tenth. Nico Rosberg then improved his own best time, but he was still slower than both of the Ferraris, dooming him to a fourth place start.