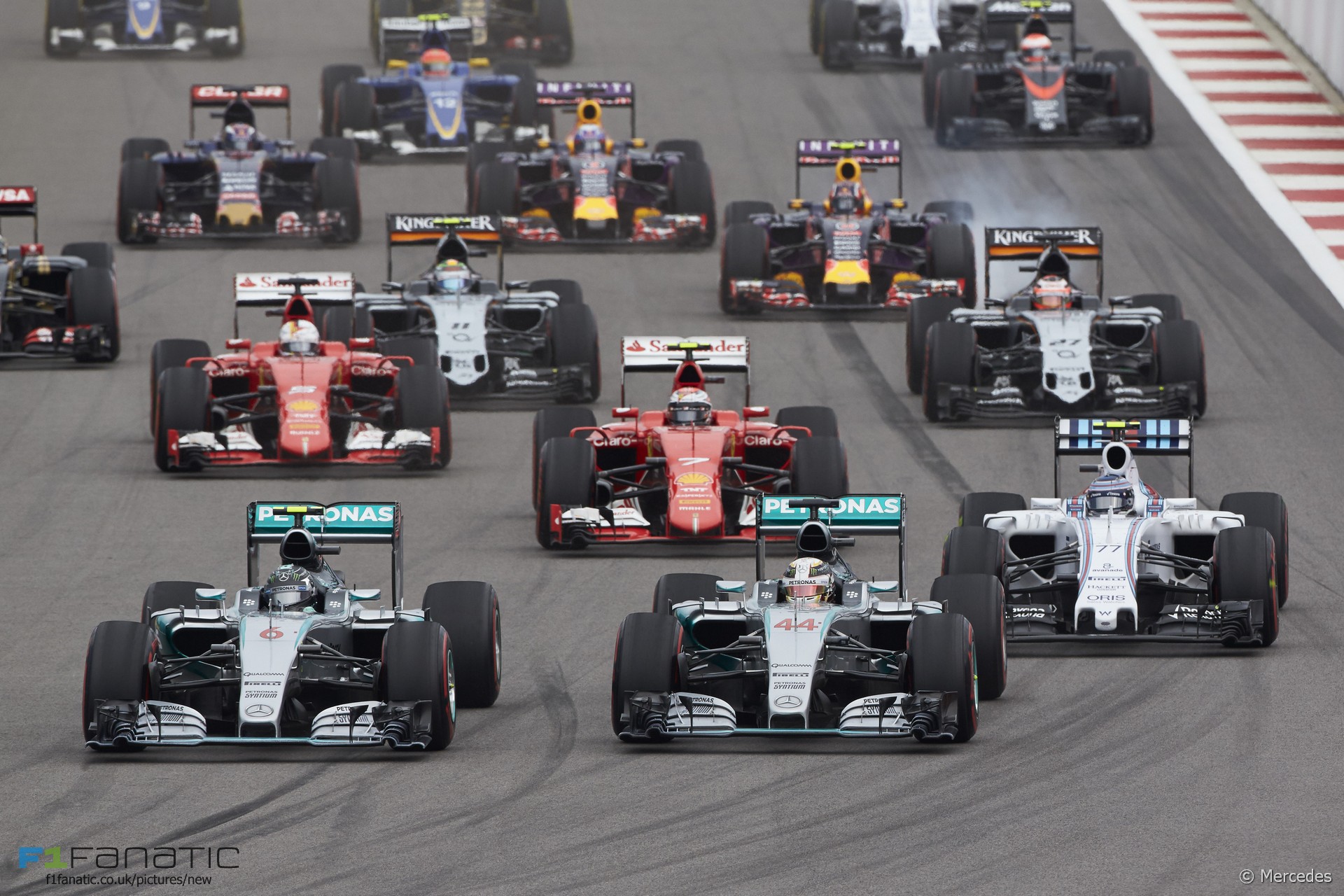 Lewis Hamilton – In a repeat of Japan, with minimal set-up time Hamilton wasn’t able to keep Rosberg from pole position, and he went off on his second run in Q3 as he tried to. The opening moments of the race promised an exciting scrap between the pair, but it all came to naught when Rosberg dropped out. Not threatened from behind, Hamilton only had to worry about his tyres cooling off behind the Safety Car and a minor problem with his rear wing in the closing stages.

Nico Rosberg – Was hard done by to drop out of the race with a broken throttle having beaten Hamilton to pole position and held the lead at the start – something he has struggled to do for most of the year. Qualifying had been his best effort of the year so far, beating Hamilton by over three-tenths of a second.

Daniel Ricciardo – Said he had sacrificed qualifying performance to have an optimal race set-up and it looked like it would pay off after the team gambled on pitting under the second Safety Car. That helped him up to fourth, but after soaking up 15 laps of pressure from Bottas the Williams finally got through. How long he could have kept Raikkonen behind we’ll never know because a suspension fault put him out shortly afterwards.

Daniil Kvyat – Believed he could have improved and potentially joined his team mate in Q3 with the benefit of a second lap in Q2, but wasn’t able to fit one in. He made big gains at the start, jumping up to seventh, but was clearly slower than his team mate. Kvyat didn’t pit under the Safety Car and therefore had a more conventional race. Massa passed him easily but he inherited fifth place after Raikkonen was penalised.

Felipe Massa – Last year a technical problem in qualifying left Massa languishing near the rear of the field in Sochi – this time he largely had himself to blame following an error in Q2. He recovered well in the race, however, using the alternative strategy of starting on the soft tyres and staying out during the Safety Car period. He passed Kvyat and was close enough to Raikkonen to demote the wounded Ferrari on the final lap.

Valtteri Bottas – Bottas seems to have an affinity for the Sochi track: he qualified strongly again, and although Raikkonen got ahead on lap one the Safety Car restart afforded Bottas a chance to regain the place which he grabbed. Having to pit earlier than the Ferraris for fresh tyres undid him – it dropped him into traffic, allowing Vettel to jump ahead, and at the end of the race his more-worn tyres allowed Raikkonen to close and make that fateful overtaking attempt.

Sebastian Vettel – Was clearly quicker than Raikkonen early in the race, and after getting past he jumped Bottas through the pit stops with little difficulty. He did his best to chase Hamilton, setting the fastest lap as he did, but his pursuit always looked to be in vain.

Kimi Raikkonen – Found it more difficult than others to heat his tyres up on the gripless track, but despite Mercedes impairing Ferrari’s tyre warm-up with a very slow formation lap he got away beautifully and moved up two places to third. He couldn’t stay there however – first Bottas got by and then Vettel, Raikkonen wisely opting to let the latter past after cutting turn two. Ricciardo’s demise moved him up to fourth, but a rash move on Bottas on the last lap fully warranted the penalty he received.

Fernando Alonso – Ran new engine components on Friday which led to an inevitable grid penalty for the race. Made his trademark speedy getaway – climbing briefly to 13th – before being passed with predictable ease by the likes of Sainz and Grosjean. After the Lotus driver crashed Alonso put on a set of super-soft tyres for an impressive, 40-lap haul to the chequered flag. He took one too many liberties at turn 16 on the way, however, and despite a warning picked up a five-second penalty for violating track limits, which dropped him out of the points.

Jenson Button – Unlike Alonso, Button made it through into Q2 and qualified an excellent 13th which is his best result this year besides Monaco. Despite being a “sitting duck” in the race – Nasr and Maldonado blasted past in his final stint – Button mimicked Perez’s stint and hung on for ninth place.

Nico Hulkenberg – Won the very close battle of the Force Indias in qualifying: Hulkenberg took sixth place by just 32 thousandths of a second. But cold tyres caught him out at the start – he spun at turn two and was hit by Ericsson.

Sergio Perez – Running sixth after the start, Perez was well-placed to take advantage of the Safety Car period caused by Grosjean’s accident, and as in the past he proved a master at coaxing every last drop of life from his tyres. Even so his podium hopes seemed to be over when Bottas and Raikkonen passed him with DRS on the penultimate lap – only for the pair to collide on the next tour, restoring him to a well deserved third place.

Max Verstappen – The 18-year-old was left to solider on alone in qualifying after Sainz’s crash, but he made it to Q3 and claimed a decent ninth place on the grid. He was caught up in the Hulkenberg/Ericsson tangle at the start, however, and floor damage hindered his efforts to recover. Having taken the chequered flag in 11th he was promoted to the final point by Alonso’s penalty.

Carlos Sainz Jnr – His huge crash at turn 13 on Saturday appears to have been caused by driver error – perhaps a combination of it being his first flying run on a new set of tyres and the instability caused by the DRS closing in the braking zone. Happily he was uninjured and remained conscious which meant he was able to race. Despite admitting he felt dizzy early in the race Sainz picked off the slower cars and made it to the top ten, and the Safety Car allowed him to make a well-timed switch to soft tyres. His brakes failed to go the distance, however, and he retired after a second touch with the turn 13 barrier – fortunately a much lighter one.

Romain Grosjean – As usual there was only one Lotus in Q3 and it was Grosjean’s. Race day turned sour quickly, however: he picked up front wing damage in the melee at turn two, then on lap 12 he got onto the marbles at turn three and crashed heavily into the barrier, fortunately without sustaining injury.

Pastor Maldonado – Was one of only three drivers to run the alternative strategy to the end, but despite leaving his tyre change until lap 31 he felt his car performed poorly on super-softs at the end of the race. He hung on for seventh place.

Marcus Ericsson – A luckless weekend: A tyre sensor problem scuppered him in qualifying and Hulkenberg’s spinning Force India left him with nowhere to go at turn two at the start.

Felipe Nasr – His and Sauber’s best result since Australia was assured even before Raikkonen’s penalty promoted him to sixth. Nasr qualified particularly well, taking 12th on the grid after reaching Q2, and in the race he ran the longest opening stint of anyone on super-soft tyres despite not having used them during practice.

Will Stevens – Dropped behind Merhi at the start and flat-spotted his tyres at the restart. That meant he had to pit a second time and ensured he finished last.

Roberto Merhi – Back for his penultimate race of the year, Merhi’s run to 13th was incident-free.

Rosberg was one of several drivers with hard luck stories in Sochi. Ricciardo was unlucky too and Sainz was on course for a great result before his brake failure – though he might have done more to ease that problem.

But I can’t think of a good reason to give this one to anyone other than Perez. Yes, he was out-qualified by Hulkenberg, but the margin involved was mere hundredths of a second. The race circumstances were made for Perez’s particular skills with his tyres and he delivered. He seems to be revelling in the upgraded VJM08: this was the latest and best of several recent strong drives by him.

Who was the best driver of the 2015 Russian Grand Prix weekend?