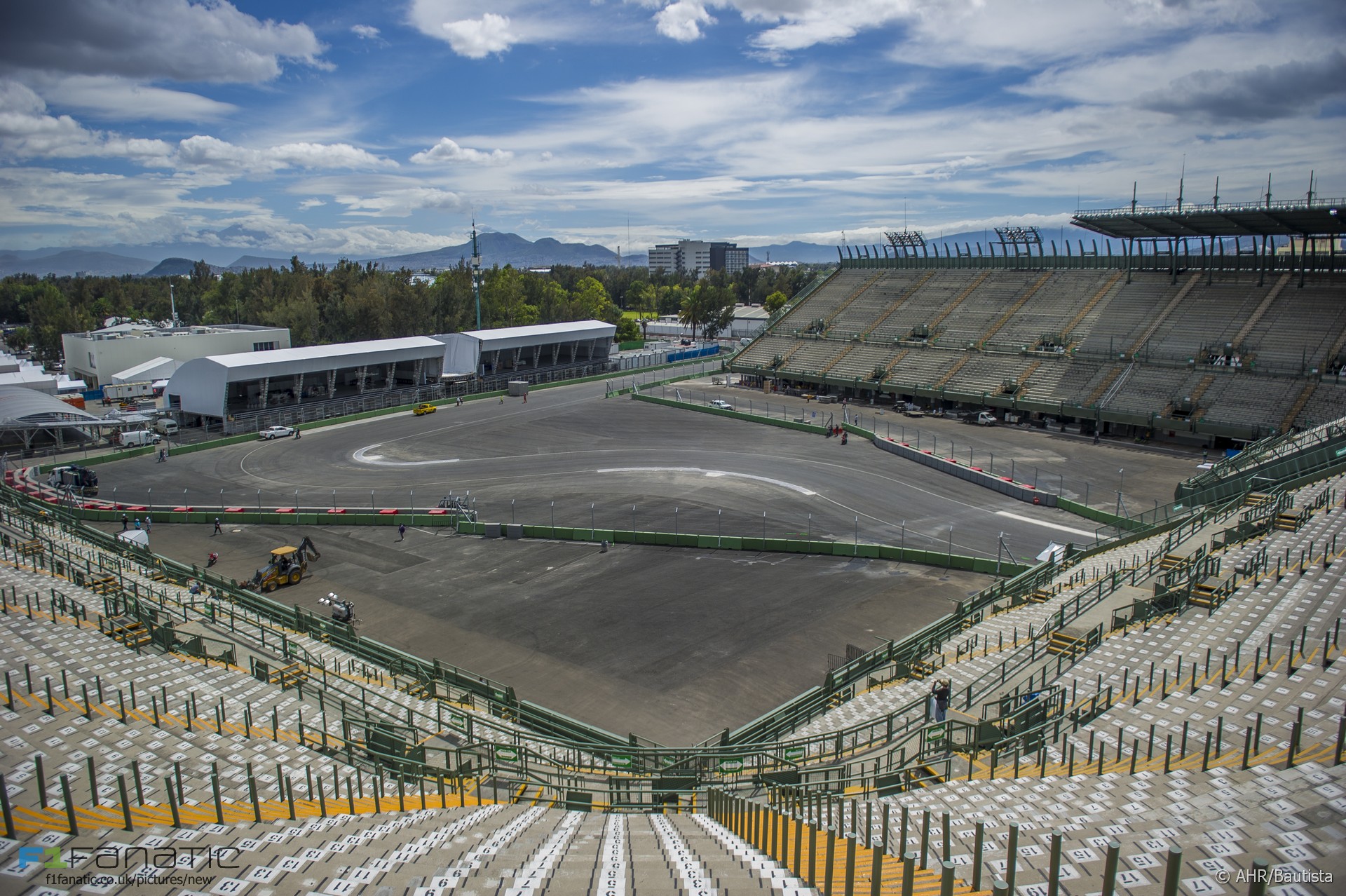 With telecommunications giant Telmex pumping money into the careers of drivers like Sergio Perez and Esteban Gutierrez, an F1 return to Mexico was always going to be just a matter of time.

And the Autodromo Hermanos Rodriguez, which hosted F1’s two previous spells in Mexico from 1963 to 1970 and 1986 to 1992, was the obvious choice of venue. There aren’t many FIA Grade One racing circuits which nestle in the heart of cities home to over eight million people.

However the limited footprint of land presented some problems when the race organisers came to bring the circuit up to the FIA’s exacting standards, particularly its famed Peraltada corner. In the years since F1’s last visit several series had bypassed the corner or used chicanes, making it inevitable F1 would have to do the same.

When F1 last raced at the track the lack of run-off was already a cause for concern but there was no room for expansion on the outside. The year after it left the track owners built a baseball and concert stadium inside the corner called Foro Sol, further limiting their options to continue using Peraltada. The position of the pit lane entrance and the high approach speed to the fairly narrow bend further complicated matters.

For F1’s return the track owners therefore decided to make virtue out of necessity, and revived the practice of routing the course through the stadium, as was first done when CART visited the circuit in 2002:

Although F1’s version of the same solution will be tighter and slower, as is Hermann Tilke’s wont, this seems a reasonable compromise. The unique experience of the Foro Sol will be completed by the fact the podium overlooks this section of the circuit – expect deafening roars if Perez is back on the rostrum on Sunday.

Even so, it’s impossible not to look on the loss of an iconic corner like Peraltada and not feel a tinge of regret. And it’s not the only challenging aspect of the Autodromo Hermanos Rodriguez which has been toned down.

The Esses used to be a sinuous section of seven consecutive corners, each feeding into the last. The new version has just five, briefer turns, and one of these has clearly been tightened since the original plans for the circuit renovation were drawn up. Again, the pressing need has been to maximise run-off without further encroaching beyond the space owned by the track.

Perez was predictably eager to downplay the extent of the revisions. “There are quite a few changes compared to the old layout when Formula One last raced there, but I don’t think the circuit has lost any of its character,” he said.

However he was certainly right about Mexico’s enthusiasm for Formula One: “Mexico has a lot of history in motorsport, the fans know the sport, they have a lot of enthusiasm and have been waiting a long time for Formula One to come back. I think everyone will have a great time.”

While the driving challenge of the Autodromo Hermanos Rodriguez has clearly been toned down, the engineering challenge remains high. The 1.2-kilometre long straight at the beginning of the lap – which should make for a spectacular start to the race – means the circuit’s overall character is one part Monza to two parts Hungaroring.

As anyone who has visited Mexico City will know, the altitude can take some getting used to. To put this into perspective, F1’s highest-altitude venue used to be the Red Bull Ring at 660 metres. But the Autodromo Hermanos Rodriguez stands at 2,200m. This will affect the drivers (though they have sufficient time to acclimatise), the power units and the aerodynamics.

Higher altitude means thinner air, which for conventional engines would mean less performance. However as F1 engines are turbocharged, and are further boosted by electrical systems which are not affected by altitude. Renault estimate that while their normally-aspirated engines were around 22% down on power when F1 last visited this track in 1992, this year the power output will be the same as if the cars were racing at sea level. However the turbochargers will spin up to 8% faster in order to achieve this.

Thinner air also means less drag, and so on the long straight F1 cars should hit some of their highest top speeds of the year – over 350kph (217mph) in qualifying.

As usual, F1’s tyre supplier Pirelli has opted for a “more conservative” compound selection at what is effective F1’s first race at a new track. The soft and medium tyres will be available, but as with most new tracks expect to hear drivers complaining about a lack of grip on the newly-laid surface.

And with the likelihood of a dry race increasing, the grand prix could turn on who can stretch their tyres out to a single stop instead of one – a traditional strength of the local favourite.

Nico Rosberg’s resurgence in qualifying – he has been on pole for the last three races in a row – came too late for him to stop Lewis Hamilton from wrapping up the championship with three races to go. Nonetheless if he keeps it up he has the chance to dent his team mate’s pride and keep him from victory – something which will surely appeal after Hamilton’s uncompromising turn one tactics in America.

Daniel Ricciardo had a chance to drive the circuit back in July, although the track surface hasn’t been completed at the time. Despite the track’s long straight, its high proportion of corners should make the RB11 a competitive proposition against

Failing to score in Austin could have been a huge blow for the team, particularly as closest championship rivals Red Bull were leading the race at one stage. Fortunately for Williams the damage only amounted to a single point in the end, and Mexico’s long straight should allow them to press home the advantage of their Mercedes power unit.

Kimi Raikkonen now has less than half of his team mate’s points tally following his retirement during the United States Grand Prix. However he is holding off Bottas for fourth place in the drivers’ standings by 12 points.

While the twistier parts of the circuit should suit the McLaren reasonably well, the long main straight will expose the Honda’s major vulnerability when it comes to energy deployment. This could be a familiar case of the black and red cars qualifying reasonably well, only to be devoured by their rivals on race day.

Perez arrives at his first home race in excellent form after a fifth place and a podium for third in his last two starts. He expects this weekend to be “one of the highlights of my career” and believes the track will achieve “modern classic” status.

Max Verstappen’s superb fourth place in Austin has moved him into the top ten in the drivers’ championship, leapfrogging highly-rated rivals Romain Grosjean and Nico Hulkenberg.

Grosjean has suffered frustration after frustration since his podium finish at Spa, scoring only once in the last five races. Austin was another race to chalk up to misfortune. “I was pretty pissed off to get hit at the first corner like that as it ruined my race,” he said.

Monisha Kaltenborn said her team were lucky to come away from the Circuit of the Americas with points. “We can absolutely not be satisfied with this weekend,” she said. “It is not an excuse that one driver did not know the track before and we were not able to run many laps here. Almost everything that should not happen during a race happened.”

Alexander Rossi continues in his role as Roberto Merhi’s replacement having matched the team’s best result of the season so far last weekend. However their year-old Ferrari engines will be a major weakness on the long straight.

If you’re heading to Mexico for this weekend’s race, we want to hear from you.