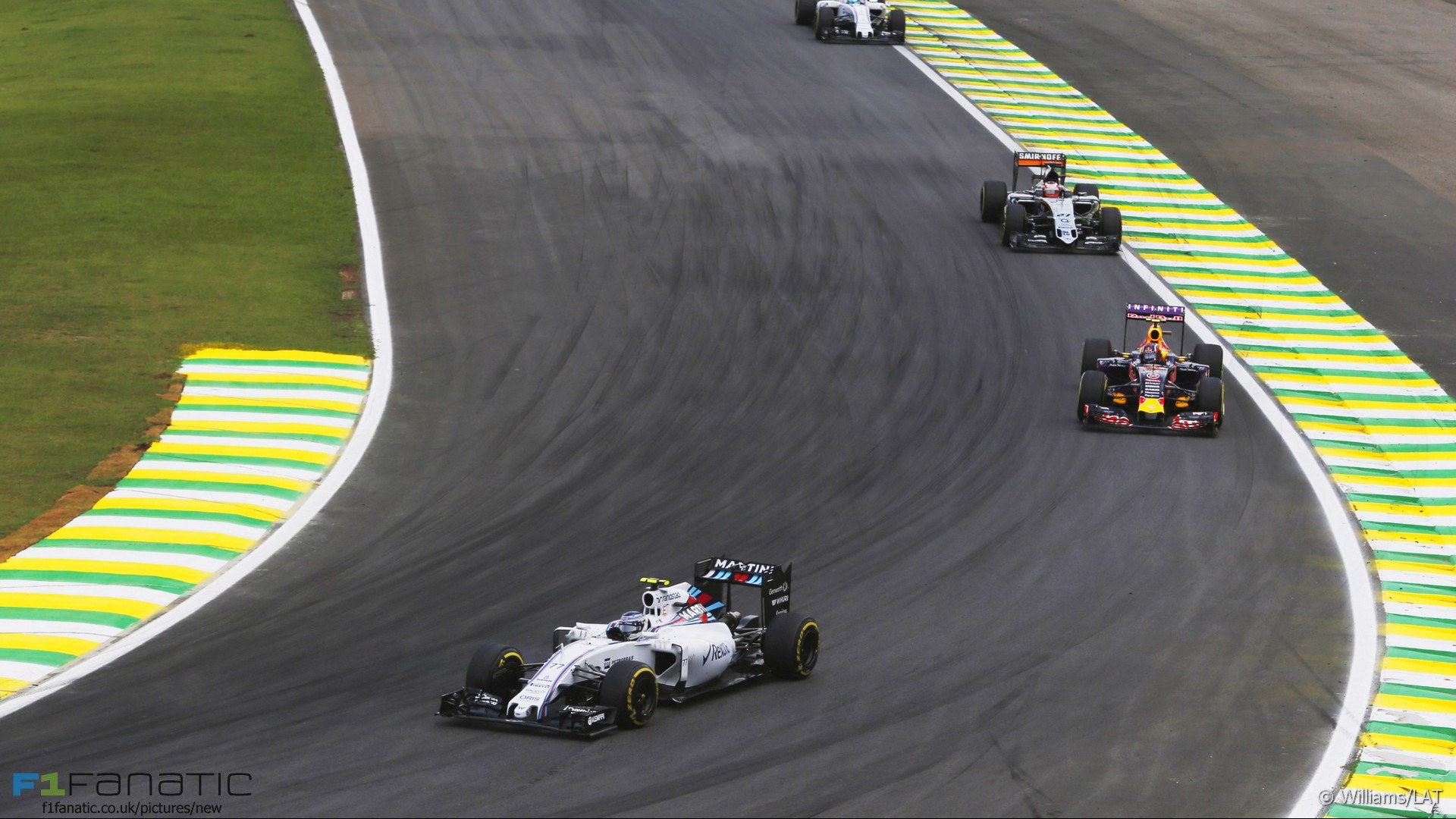 The top five drivers finished in the same order they completed lap one at Interlagos, prompting fresh questions over what could be done to increase the amount of action.

Sebastian Vettel said the Brazilian circuit should be “one of the easiest tracks to overtake” at, and suggested drivers need more grip rather than downforce.

“Sure, if you’re behind you always want the DRS zone to be longer because artificially it helps you to get closer. Naturally if you are only a tenth or two quicker then it’s very difficult to pass – whereas if you’re a second quicker it becomes more easy.”

“I think in general what we need to follow another car closer in medium speed, high speed, slow speed corners is more mechanical grip. So shift the percentage between aero/mechanical more towards more mechanical.”

Vettel believes the current generation of tyres, which were intended to create more exciting races, are in fact doing the opposite.

“I think we need better tyres that allow us to go quicker,” he said. “Drivers want to be quicker. So, I think the solution is very simple.”

“Unfortunately the sport is very political with different interests from different people. Yeah. I think it’s fair enough to give whoever tyre manufacturer, in this case Pirelli, the chance to improve their tyres – but we need to run. But since the responsible people, the teams, whoever, can’t agree on something, it will be difficult to make progress.”

“Unfortunately the people who literally are paying for that are sitting on the grandstands. So, we would love to go quicker. I think they would love us to go quicker and have more excitement but bottom line is, if you look ten years ago, 20 years ago, it wasn’t like there was a lot more overtaking in the race. So it’s also not a disaster what we see now.”

Lewis Hamilton, however, was pessimistic over whether those running the sport would pay attention to them.

“At the end of the day it doesn’t really matter what we say because it can’t happen,” he said. “The big bosses make the decisions and whether or not they make the right ones for many years, who knows.”

“Something’s got to change, you know? Because some races you can follow which enables you to have some good racing, obviously places like Austin where there was the last decent race but otherwise there are some places it’s just… I guess for fans it’s probably not too exciting to watch.”

“Of course, it’s always nice when you’re at the front, as we have been for some time now – but still, being able to race is what… and also down the back, the rest of the field is probably what fans want to see. That’s probably a change that would be looked positively on.”

65 comments on ““Something’s got to change”: Drivers urge F1 bosses to improve the racing”