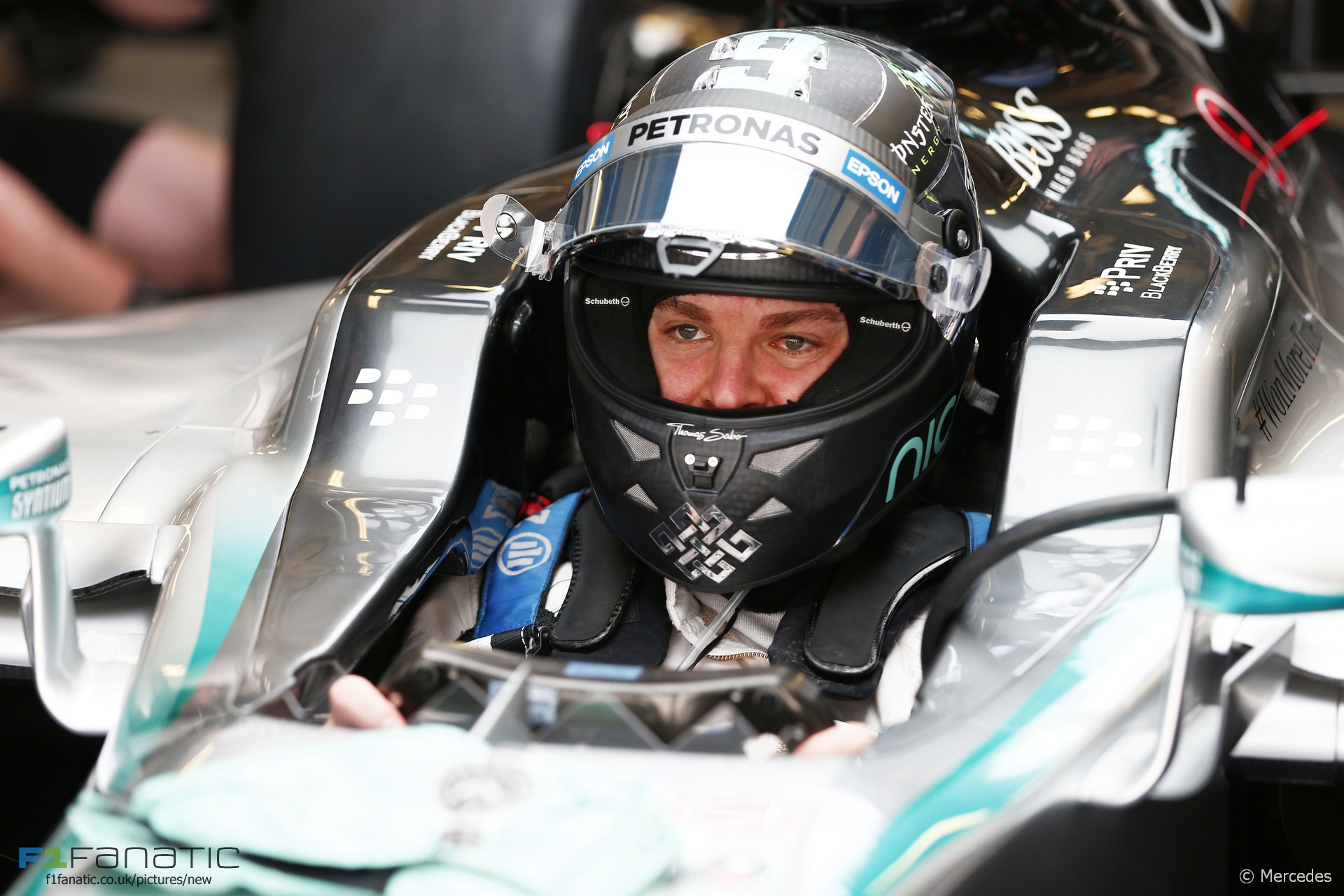 Nico Rosberg took his sixth consecutive pole position – and his second in a row in Abu Dhabi – despite running an older engine than his team mate.

It seemed Lewis Hamilton was on course to halt Rosberg’s run of pole positions after heading the first two parts of qualifying, only for his team mate to wrench his grip from the top spot in Q3.

Kimi Raikkonen saw off a challenge from Sergio Perez to take third place after his team mate’s Ferrari dropped out in Q1.

Ferrari were stung in the first part of qualifying as Sebastian Vettel failed to make it into Q2 for only the second time all year. This was despite Ferrari deciding to play it sake and send Vettel out on a set of super-soft tyres having initially sent both drivers out on the harder rubber. Vettel began to push for a lap but backed off – and regretted he had when Jenson Button produced a flying lap in his McLaren which relegated Vettel to 16th.

Fernando Alonso’s hopes of joining his team mate in Q2 were dashed when he picked up a puncture on his last lap, leaving him out. Marcus Ericsson was also stymied by a technical problem and failed to make the cut.

They joined the two Manors in elimination with Will Stevens ahead of Roberto Merhi, although those positions will be reversed on the grid by the former’s grid penalty.

Hamilton was on top in the second part of qualifying as he had been in the first, lowering his best to a 1’40.758 with Rosberg two-tenths behind him. However the scrap for third place behind them was close: Sergio Perez edged Raikkonen and Daniel Ricciardo with a late effort.

Romain Grosjean’s final qualifying session for Lotus ended in frustration On his first run he was told to pit without changing gears due to a technical problem, and although the team got him out again at the end of the session he came to a halt after just seven corners.

The other Lotus also failed to reach Q3, as did the sole remaining Saubers and McLarens. “Ouch”, Button remarked after being told the gap to Q3 was less than two-tenths of a seconds.

The final driver to miss the cut for Q3 was Max Verstappen, while his team mate progressed to the top ten shoot-out.

Hamilton couldn’t repeat his pace from the first two sessions at the start of Q3, a steady 1’41.016 handing Rosberg an opportunity which he did not waste. The pair embarked upon their final qualifying runs of the year with Rosberg’s the time to beat.

Hamilton duly produced the fastest time of anyone so far through the middle sector, where two long straights make the greatest demands on engine grunt. But Rosberg, running after his team mate and benefiting from the improving track, was a few thousandths of a second quicker even here.

But it was a blistering run through the stop-start final sequence of corners which clinched it for Rosberg. He took pole by almost four-tenths of a second and that gap could widen if Hamilton is stripped off his fastest time for leaving the track with al four wheels. His second-fastest time would still be good enough for second place in that case, however.

Perez held third after the first runs, which would have been Force India’s best qualifying performance of the year had he not been beaten by Raikkonen on their next runs. Ricciardo held his fifth place ahead of Valtteri Bottas.