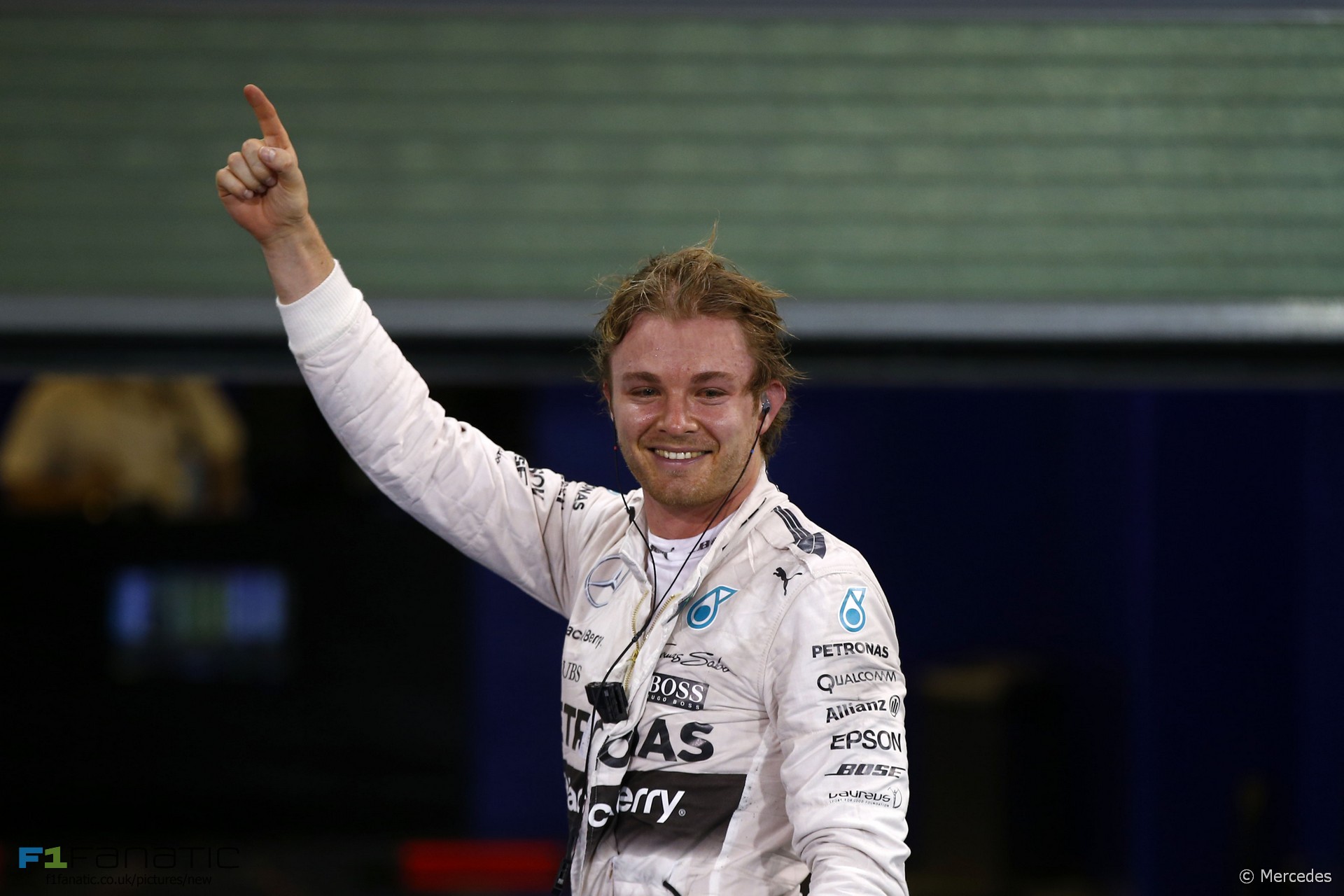 Nico Rosberg rounded out the 2015 Formula 1 season in winning style, securing his third successive victory under the lights at the Abu Dhabi Grand Prix ahead of team mate Lewis Hamilton.

Hamilton could not find a way past his Mercedes team mate and was forced to settle for second for the third race in a row, while Kimi Raikkonen secured fourth place in the drivers’ championship by taking the final step on the podium.

Sebastian Vettel recovered from 15th on the grid to finish fourth, with Force India achieving a strong finish to their season with fifth and seventh for Sergio Perez and Nico Hulkenberg respectively.

As the five lights extinguished for the final time in 2015, it was Rosberg who streaked away into the lead from pole position, while Hamilton came under immediate pressure from Raikkonen’s Ferrari for second but was able to hold his position into the first corner.

Pastor Maldonado’s incident-filled season ended at turn one when he was speared by Fernando Alonso after the McLaren driver made contact with Felipe Nasr’s Sauber into the braking zone. The McLaren was able to continue, but Alonso was soon punished with a drive-through penalty for his role in the collision.

It did not take long for the first round of pit stops to begin, with the entire field opting for Soft compound tyres. Valtteri Bottas was one of the first to stop, but he was released into the path of Jenson Button’s McLaren, with the resulting contact causing considerable damage to the Williams’s front wing, forcing him to stop again the next lap and earning a five-second time penalty from the stewards.

After starting towards the back of the field, Sebastian Vettel used a long first stint of 23 laps on the Soft tyre to leap-frog up the field to sixth place by the mid stage of the race. Max Verstappen benefited from team mate Carlos Sainz Jr letting him past to maximise his strategy, but a major lock up under braking for Turn Eight left Verstappen with severe flat spots on both front tyres and forcing an unscheduled stop for new rubber.

Rosberg had been managing a comfortable gap to Hamilton, but the world champion begin to gradually eat away the margin to his team mate around Lap 30 as the second round of stops loomed. Rosberg was the first of the Mercedes to box, with Hamilton opting to try and stretch his tyres far longer than his team mate in a bid to earn himself a strategic edge in the final third of the race.

Hamilton eventually pitted for the second time on Lap 42, rejoining the circuit with a 13 second gap to Rosberg with just 13 laps in which to catch and pass him team mate for the win. The world champion began to take seconds out of his team mate’s lead, but once the Soft Pirelli tyres had given up their best, Hamilton was unable to get within striking distance of Rosberg’s Silver Arrow.

Rosberg cruised home to his first win in Abu Dhabi and his third successive victory. Hamilton crossed the line eight seconds adrift of his team mate, with Kimi Raikkonen taking the final podium place for Ferrari almost 20 seconds behind the winning Mercedes.

Sebastian Vettel took fourth after a strong recovery drive, followed by the Force India of Sergio Perez, Daniel Ricciardo in the Red Bull and Nico Hulkenberg in the sister Force India.

Felipe Massa took eighth, Romain Grosjean took ninth in his final race for Lotus and Daniil Kvyat rounded out the points in tenth. Max Verstappen dropped from 12th on the track to 16th after two post-race penalties for exceeding track limits and ignoring blue flags.