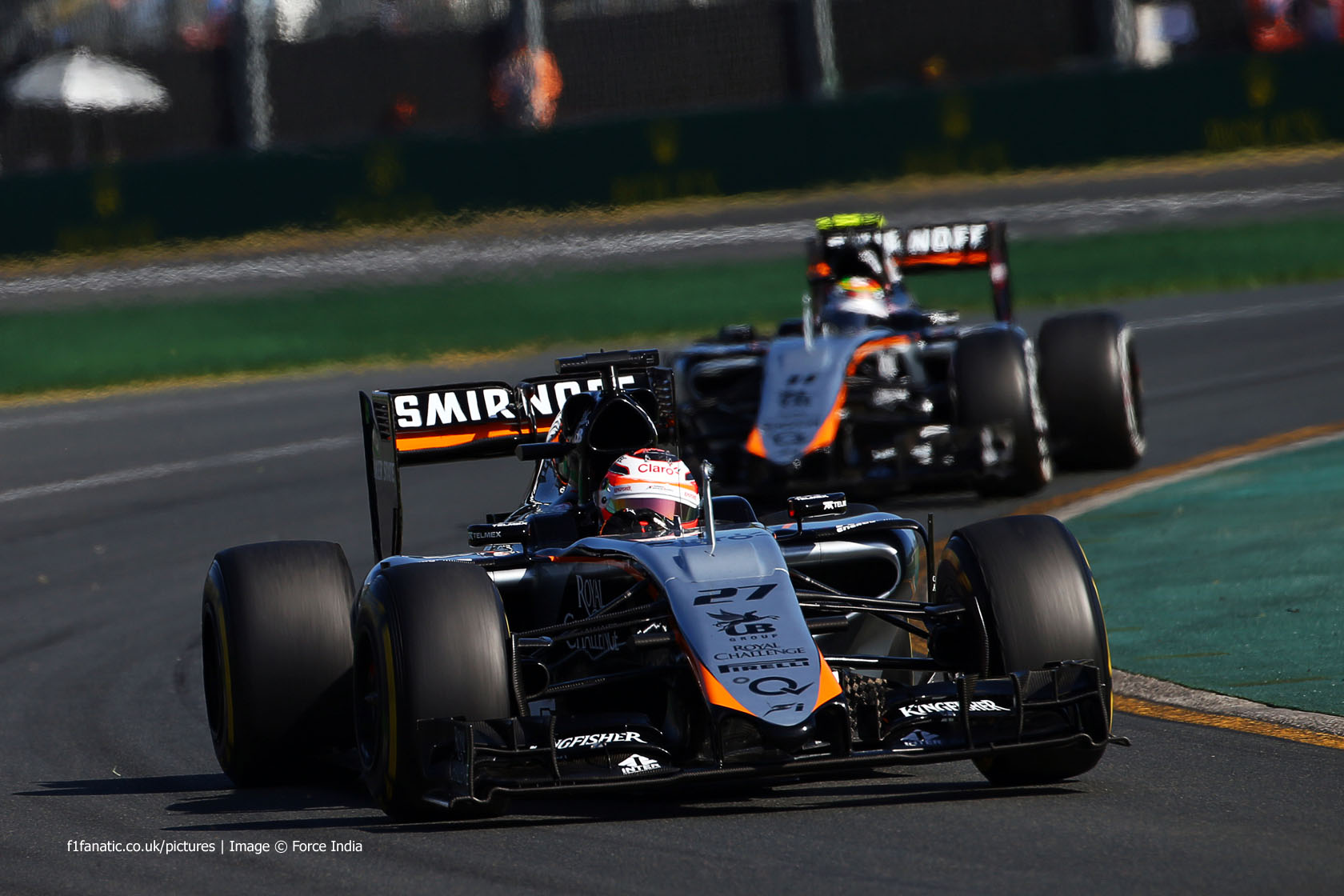 It was clear where the balance of power lay at Force India as the season came to an end: Nico Hulkenberg was decisively put in the shade by Sergio Perez. But it wasn’t like that all year long: Hulkenberg started and finished in front of his team mate more often that not when both saw the chequered flag.

Force India began the year with an underdeveloped version of the VJM08 and at times Hulkenberg could clearly wring more out of the car than Perez in qualifying and gathering those much-needed points in the races. He was seventh first time out in Australia, and in Austria he lined up fifth on the grid while Perez went out in Q1.

On other occasions he tried a bit too hard: after a stunning start in Malaysia he tripped up while battling the Red Bulls, and in Canada he spun while trying in vain to keep Sebastian Vettel behind – though he still brought the car home in eighth.

He seemed inspired to new heights after winning the Le Mans 24 Hours with Porsche, taking a strong seventh in the rain at Silverstone and running fifth in Hungary until his front wing failed.

After the summer break Hulkenberg suffered various setbacks. Some of these were self-inflicted: the tangle with Felipe Massa in Singapore and first-lap retirement in Russia. On other occasions the car let him down: the front wing failed again in Austin, causing a collision with Daniel Ricciardo, and in Belgium he failed to start at all.

Meanwhile Perez had made a leap forward with the B-spec car which usually meant he was faster. There were two notable exceptions to this: Suzuka and Interlagos, where Hulkenberg took a pair of sixth places. But as last year it was his team mate who achieved the team’s best result – and this time Perez scored most of their points, too.

Australia – Won the qualifying battle at Force India by one-thousandth of a second, but with the VJM08 still early in its development Q3 seemed out of reach. Rose unobtrusively to seventh with an error-free race. “At this stage in the season it is important to capitalise on any opportunity,” he said, adding he expects the team to be more competitive in Malaysia.

Malaysia – Both Force India drivers were caught out by the rain in Q2 but Hulkenberg made amends on lap one. “Mega first lap!” he exclaimed on the radio after making up six places to gain seventh. That became second when the Safety Car came out, but after racing resumed Vettel left him behind at over two seconds per lap. As he came under increasing pressure from behind he tangled with Kvyat while under attack from both Red Bulls and was given a debatable ten-second penalty which scuppered his chance of points.

China – Was one of the first drivers to do his last run in Q1 and paid the price, missing the cut for the next stage. Jumped from 16th to 12th at the start which included passing Daniil Kvyat’s Red Bull and was running close to Verstappen and Ericsson before being forced out with drivetrain problems.

Bahrain – Force India were more competitive on a track which has traditionally suited them, and Hulkenberg delivered by taking his VJM08 into Q3, claiming eighth on the grid. The race was not as successful – he couldn’t make his tyres last and slipped to a disappointed thirteenth.

Spain – Having been 12th in final practice Hulkenberg hoped to qualify better than 17th, but the VJM08’s shortage of downforce made life difficult. “My final lap was not great,” he admitted, “but it’s not easy when the car is working in such a narrow window”. He fell behind Perez at the start and spent the middle of the race stuck behind Maldonado’s ailing Lotus, which confined him to 15th.

Monaco – Knocked into a barrier by Alonso at the start, Hulkenberg had to pit for a new front wing on lap one. Nonetheless his team thought points might be possible until the Safety Car came out.

Canada – Equalled the team’s best qualifying result with seventh, at a track where Force India’s Mercedes engine neutralised some of their usual disadvantage. A late-braking move at turn three got him ahead of Maldonado at the start, but a much earlier pit stop for the Lotus driver got him back ahead. Hulkenbreg then spun while trying to defend seventh place from Vettel. “I probably shouldn’t have tried so hard to defend against Seb,” he admitted, “but when you’re a racer you just don’t want to give up a position without a fight.” That scuppered any chance of catching Maldonado at the end, and he finished eighth.

Austria – Reacclimatised to F1 after his Le Mans triumph, and with a new engine behind him went sixth-fastest on Friday. He improved by one place on Saturday to take fifth on the grid, while Perez went out in Q1. In the race he was passed by Bottas, jumped back ahead with a quick pit stop, but ultimately lost out to the Williams. However sixth place was Force India’s best result of the year so far, and helped them pass Lotus in the constructors’ championship.

Britain – Force India’s heavily revised car looked best in Hulkenberg’s hands and he duly took it into Q3. A superb start – which he described as the best he’s ever made in F1 – put him ahead of both Ferraris. However they pitted before him, as did Kvyat, which cost him a total of three places, though Raikkonen’s troubles later elevated him back to seventh.

Hungary – Had to sit out second practice and much of the first session while the team investigated the cause of Perez’s crash. Once back on track he looked quick again however, setting the sixth-fastest time in final practice. He produced another astonishing start – leaping to sixth, then slipstreaming past Kvyat for fifth – and his race continued to run true to form as quicker rivals leapfrogged his Force India during the pit stops. A solid points finish was in the offing when his front wing collapsed on the pit straight, sending him into the barriers.

Belgium – Although he had the benefit of having raced at Spa in the World Endurance Championship earlier this year, Hulkenberg missed out on Q3 by less than six-hundredths of a second, making him the only Mercedes-powered driver outside the ten top in qualifying. “On my final lap in Q2 I made a small mistake going into turn one – I just locked the tyres and missed the apex,” he explained. “On top of that we had a small issue with the turbo, which cost us some speed and time down the straights.” His problems weren’t solved in time for the race – his car failed on the grid and he failed to start.

Italy – Having been hampered by more technical problems in Q3 Hulkenberg was one of the first drivers to pit in the race, leaving him with a long stint on medium tyres. His pace dropped of badly at the end: “I actually think we had a problem with the car,” he said, “it’s something we need to investigate because I was losing downforce, the car was sliding and the rear tyres were heating up too much”. Nonetheless he only lost one position – to Raikkonen – and crossed the line with Ricciardo and Ericsson filling his mirrors.

Singapore – Another driver who was still chasing his set-up as qualifying began, trying to dial out snap oversteer, he ended up missing the cut for the top ten. He may have tried a little too eager to claim a place from Massa at the pit exit, but it seemed harsh for the stewards to penalise him for what was little more than a racing incident in which he was the biggest loser.

Japan – Said he’d produced his best in qualifying despite not joining his team mate in Q3. He gained five places at the start – three from the drivers tangling ahead of him – and used an early first pit stop to jump both the Lotus drivers. After that he was on his own en route to sixth place.

Russia – Won the very close battle of the Force Indias in qualifying: Hulkenberg took sixth place by just 32 thousandths of a second. But cold tyres caught him out at the start – he spun at turn two and was hit by Ericsson.

United States – Lost places early on when he ran wide in turns 16/17/18, but showed his usual excellent touch with slicks on a damp track to move ahead of his team mate and Sainz. However a front wing failure while trying to pass Ricciardo left him powerless to avoid contact, and the result was his third retirement in four races.

Mexico – Following a misunderstanding with his race engineer Hulkenberg lined up tenth, five-hundredths of a second off his team mate. They diverged on strategy in the race, Hulkenberg making a two-stopper which turned out to be the better approach.

Brazil – Matched his best grid position of the year at a track where he has often excelled and set himself a target of at least holding on to the position in the race. A less than great start put paid to that, but clever use of the undercut got him back in front of Kvyat. His sixth place secured fifth in the championship for Force India.

Abu Dhabi – Said he was pleased with his qualifying lap but disappointed to discover it was only good enough for seventh place. Started well, holding fifth initially, but couldn’t make the tyres last as well as Perez and was bumped back down to seventh by Ricciardo.

As strong as he was after the Le Mans win, he was mostly shaded in the latter parts of the season. Even then he beat Perez a few weekends, but it probably was his worst season so far – not too bad, just nothing impressive.
@Hunocsi

What’s your verdict on Nico Hulkenberg’s 2015 season? Which drivers do you feel he performed better or worse than? Have your say in the comments.