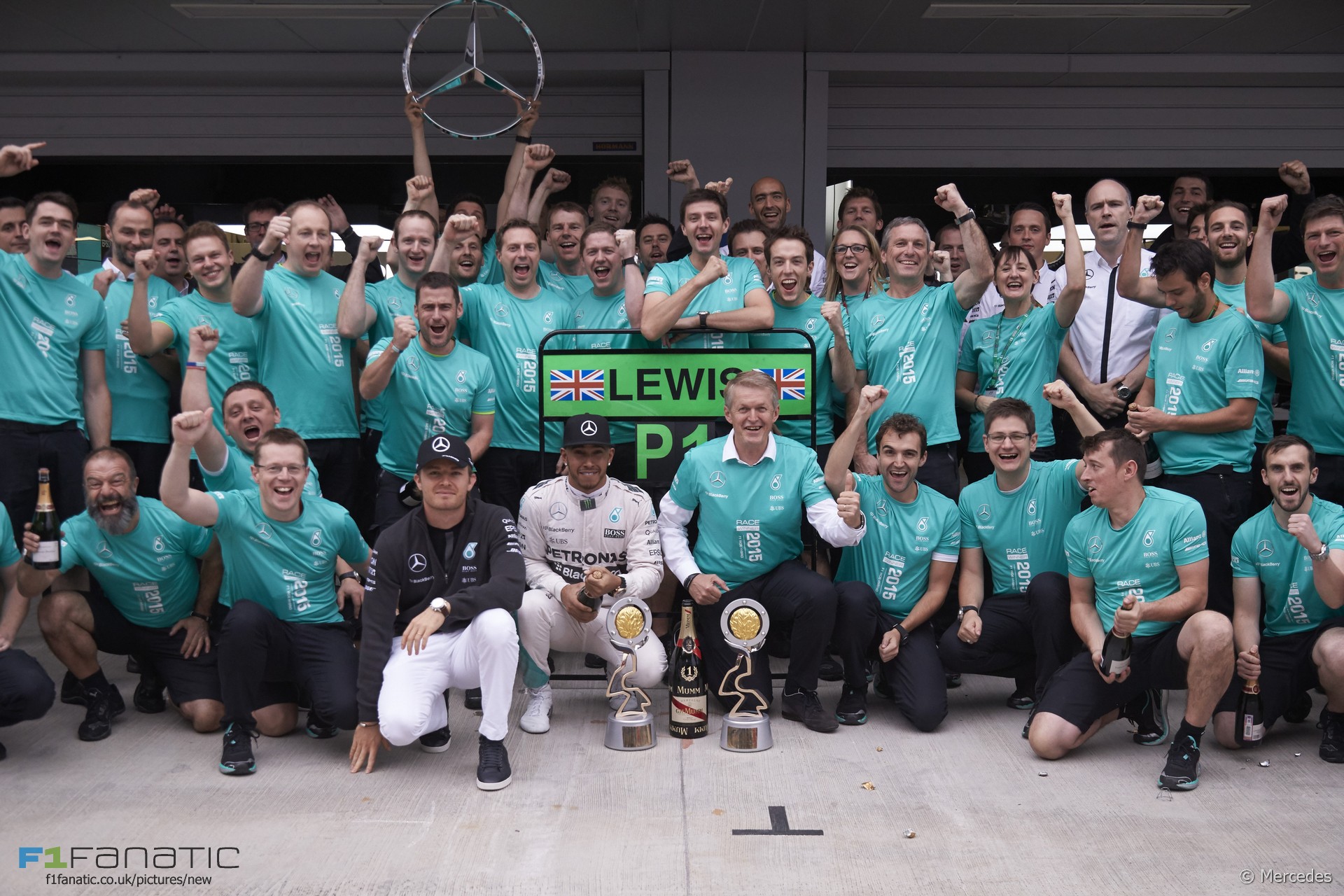 Mercedes surely cannot have expected to have dominated the second year of F1’s V6 hybrid turbo regulations as emphatically as they did the first. But in terms of pure results they actually did better.

After 19 races they had amassed more points – despite 43 more points being available last year – and achieved more one-two finishes and front row lock-outs. They won the constructors’ championship one race earlier and Lewis Hamilton sealed the drivers’ title with three races to spare – where last year it had gone down to the wire.

Although Mercedes looked even further ahead at the first race weekend of the year, over the course of the season their performance margin over their closest pursuers was slightly reduced. What made the difference this year was that the team’s off-season focus on improving reliability delivered results: the W06 only failed to see the chequered flag three times due to technical problems.

Watching the same team start and finish in the top two places week-in, week-out is never going to be a recipe for exciting races, but Mercedes cannot be blamed for their rivals failing to put them under greater pressure. Had Renault made the kind of gains in the winter Ferrari had, we would have seen a very different championship. Instead they – and by extension Red Bull – drifted further away.

While Mercedes had opposed the FIA interpreting their rules in such a way which permitted in-season development, this decision went against them. Nonetheless they remained the team to beat throughout the season and debuted an upgraded engine at Monza. This gave them one of the few reliability headaches of the year, as a failure forced Nico Rosberg to go back to an old unit – suffering a failure at the end of the race – and he concluded the season with a more heavily used engine than his team mate.

Mercedes also sharpened up in the pits, producing consistently the quickest complete stops of the season, although a slow one for Hamilton in Spain delayed his efforts to reclaim a place lost to Sebastian Vettel. The Ferrari driver was a regular thorn in the side of the silver cars.

In Malaysia he wielded the Ferrari to brilliant effect on a hot track, opting against mimicking Mercedes’ early pit stop under the Safety Car and making his escape while the W05s lost time in traffic. Mercedes treated him more warily from then on, and even late in the season they were always careful to avoid giving him a chance – notably in Brazil where they followed him onto a three-stop strategy.

The most embarrassing moment for the team came in Monaco where they made the mistake of pitting Hamilton under the Safety Car. This was at least partly at Hamilton’s urging, and problems with the team’s timing system contributed to the confusion. Fortunately their second car was close enough to collect the win, though of course that was no kind of comfort to Hamilton.

A mystifying performance in Singapore saw the two silver cars occupying the third row of the grid and only one of them reach the chequered flag – Rosberg’s, in fourth place. The one-off dip invited many theories – some more outlandish than others – but the combination of an unusual track where Mercedes had also been less competitive 12 months earlier plus post-Spa changes to tyre pressure and camber settings appears to have contributed.

This was also the point at which the pendulum swung from Hamilton to Rosberg in qualifying performance. It was too little, too late to help Rosberg in the championship – Hamilton wrapped it up in America. But that was the last time he saw the chequered flag first, which leaves an intriguing question mark over the balance of power at F1’s dominant outfit heading into the winter.