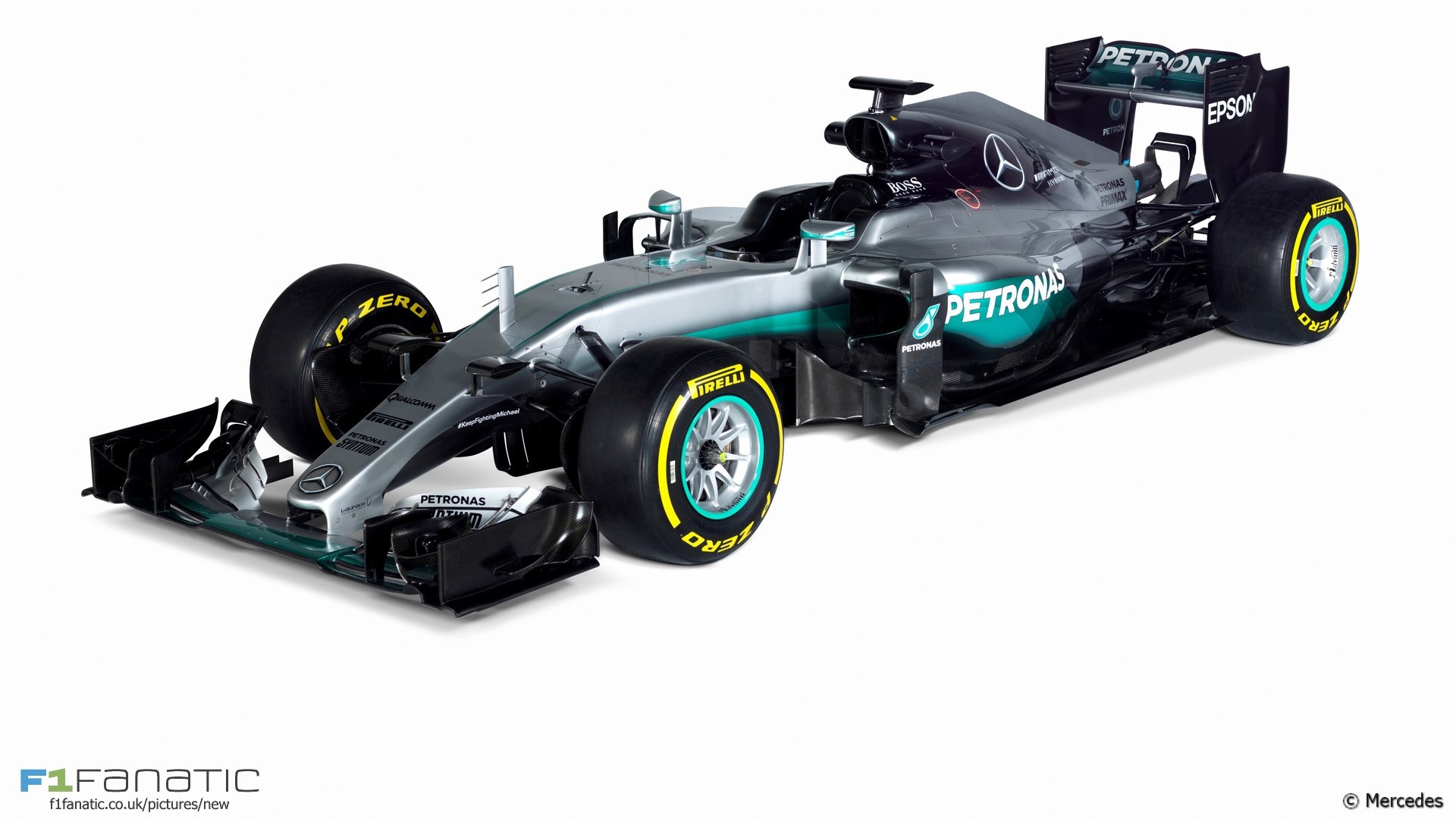 Mercedes gave us several fleeting glimpses of the new W07 over the past two days which indicated their new car was very closely related to its predecessor.

However now the car can finally be seen in detail we can see the world champions have made a few bold choices over the winter in a bid to continue their dominant streak.

Have they done enough to fend off Ferrari’s ambitious SF16-H? Let’s take a closer look at the new W07.

The W07 in its current guise has the same set-up as last year in this area, featuring a very short, slim nose and the front wing that was used throughout the majority of 2015. While this may seem unsurprising for a launch car, Mercedes executive technical director Paddy Lowe has suggested that the car seen in testing will be close to Melbourne specification.

Moving further up the nose and towards the front suspension area, Mercedes have provided no further clues as to what its plans are involving the S-duct – an ‘s’ shaped pipe that transfers airflow from the bottom of the car at the front of the monocoque to the top of the chassis.

During the Brazilian Grand Prix practice sessions the W06 ran with what appeared to be a dummy panel replicating the shape of the duct’s outlet, although there were also rumours that it was merely a disguise for a new front suspension arrangement.

However the triangular shape of the vanity panel’s upper portion which covers the internals is very reminiscent of the one seen in Brazil. Cleaning up airflow in this region will still be a top priority for most teams, so we could see some development here yet.

The under-chassis turning vanes also remain the same as 2015 for now; a four element design joining to a curved footplate appears to be the class-leading solution here.

Unlike the new Ferrari there is no indication Mercedes will incorporate a blown front axle into the W07. This involves diverting airflow that passes into the brake ducts through a hollow axle and out of the wheel nut perpendicularly to normal flow. This improves how the air is pushed outwards around the front tyre before it is sent rearward, however Mercedes has never taken up this design in previous years.

During the off-season we heard the Mercedes chiefs speak of vast changes in some areas to stay ahead of the competition. Whilst Lowe has described their new challenger as “optimisation absolutely everywhere” the roll hoop region, from and outsiders perspective, appears to be a clean break from the past two years.

The airbox is now one very large, angled inlet that appears to be divided into four individual inlets – the main central inlet, two smaller flanking apertures and a large arcing orifice above. The two angled struts that are visible are simply guide vanes so that the airflow is channeled sufficiently down one of these paths.

Last year Toro Rosso had a very large airbox which accommodated the turbo’s compressor inlet and an aperture for a larger radiator. Mercedes have gone down a similar route, the benefit being that a radiator can be packed behind the chassis’s rear bulkhead to free up space in the sidepods, allowing for tighter packaging.

The central inlet is the turbo’s compressor intake, with the two straddling ones possibly feeding an ERS cooler which would previously have sat in the sidepod. The arcing inlet is possibly for the gearbox oil radiator at the back of the car, although it seems quite large which suggests there could be another radiator sat in line with it. The give-away is that there are two nostrils in the engine cover to reject hot air from this region, as has been the case with Mercedes’ cars since 2014.

This leaves the question of where their trick water-jacketed intercooler is packaged as this is already a cramped area to begin with. It might not be until later in the season that we get a clear picture of the new layout.

The cockpit features new rear view mirrors and additional vanes which are very much an evolution over last year. The vertical vanes that sit just behind the mirrors are much higher, however, and appear to use the airflow aft of the mirror to control how it flows down the top of the sidepod. In addition the horizontal flow-conditioning vane which bridges over the sidepod’s leading edge has been raised and reshaped to further aid the down-wash of air over the car’s bodywork.

The new roll hoop design also opens up a bit of freedom around the sidepod design. The main inlets are now significantly smaller than their predecessor’s, creating a deeper undercut near the bargeboard area which will improve the quality of airflow heading towards the rear diffuser.

It is clear that Mercedes have taken some design cues from Ferrari, as the top of the sidepods are heavily sculpted in a similar fashion to those seen on the SF15-T late last year. The leading edge of the pod is sunken dramatically which, combined with the narrower inlets, has resulted in the need to make a blister in the bodywork to clear the side impact structure.

The sunken section then merges with the main body of the sidepods further behind, before the bodywork has to again bulge outwards as it forms the rear section of the car. Overall the bodywork is much sleeker, opening up more opportunities to exploit airflow at the rear end.

Inevitably Mercedes has shown us little of the W07’s rear end but there are still some interesting features to dissect. While the rear wing is one which appeared during 2015 it is worth noting that Mercedes have opted to initially run with their medium-drag upper flap shape, i.e. the outer sections turn downwards as they meet the endplate. Perhaps they have found a decent chunk of performance from the diffuser to not warrant a traditional flap shape, although this can change at any point.

Like all of the teams we have seen so far – and as seen in their fire-up video earlier this week – Mercedes have opted to place two wastgate pipes eitherside of the main exhaust outlet. But uunlike Williams and Ferrari they have managed to squeeze the pipes close enough so that the rear wing pylon can still pass around the trio and attach to the gearbox case beneath. This is very neat packaging as the wastegate pipes do not protrude outward and therefore do not interrupt airflow passing along near the centreline of the car.

Immediately behind is a new monkey seat winglet which stands tall above the rear crash structure. This is simply an evolution of the simple winglet they used in 2015, although the aerofoil section itself is now divided into two elements.

Mercedes have also adopted extra slots in the floor ahead of the rear tyre to alleviate tyre squirt, as discussed in the SF16-H technical analysis. There are now four L-shaped slots set in line with each other to build up a strong vortex – this goes against the grain of having many smaller slots that both Ferrari and McLaren are utilising. The slots are also accompanied by a pair of twisted fences to intensify their effect.