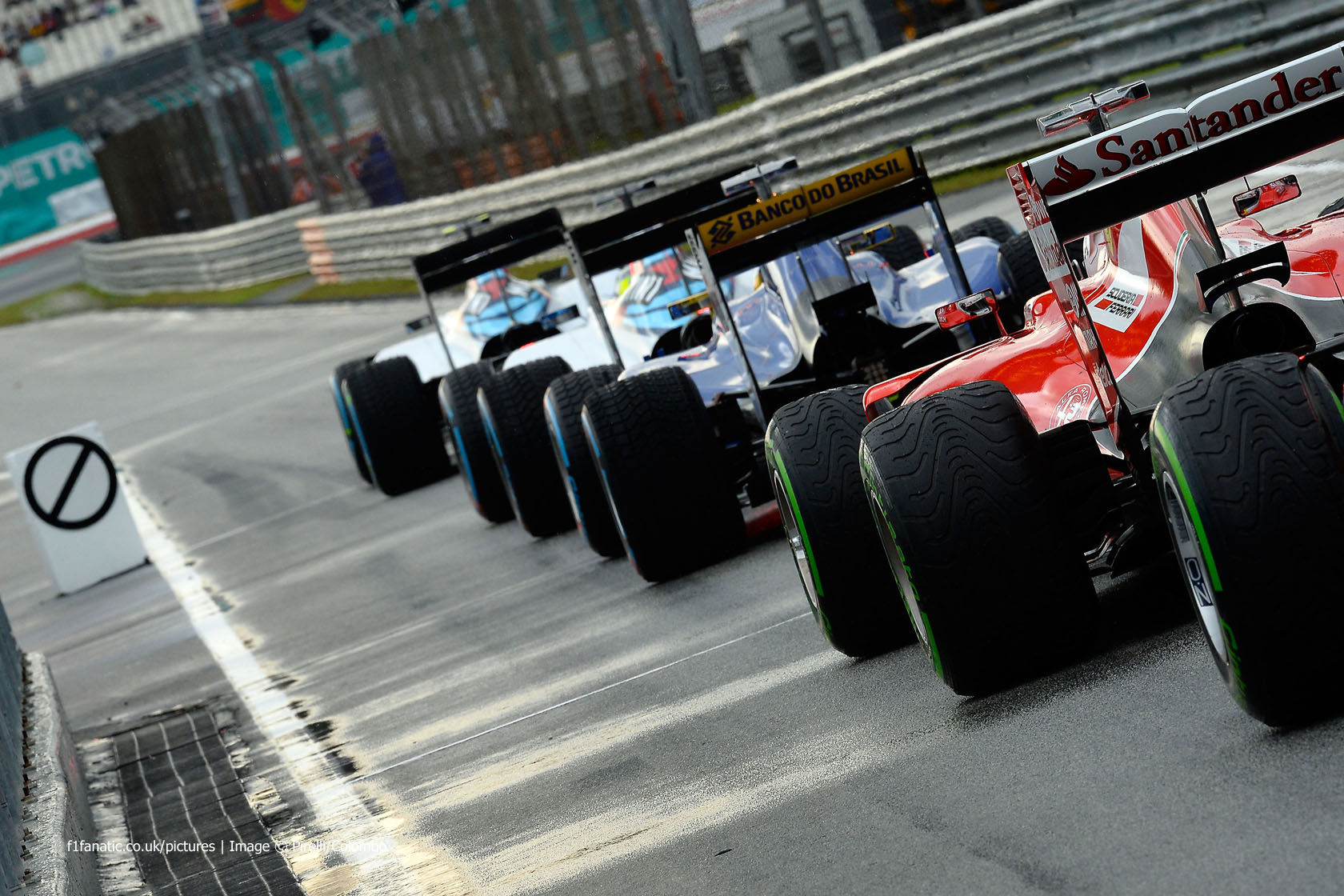 One of the most enjoyable racing modes in Codemasters’ Formula One-styled Mario Kart clone F1 Race Stars was ‘elimination’, where whichever driver occupies last place is periodically booted from the race.

This was almost certainly not what inspired F1 team bosses to concoct their new ‘elimination qualifying’ plan for the upcoming season but the principle is much the same.

Sticking within the current Q1/Q2/Q3 framework, with some adjustments to the timing of each session, the slowest driver will be eliminated every 90 seconds until the chequered flag falls. Seven drivers will drop out in the first two sessions wnd Q3 will end with two drivers on track for the final 90 seconds.

Elimination qualifying obeys the unwritten F1 law that every alteration to the rule book must make the sport more complicated. Staying true to form, the powers-that-be authorised to shake-up without consulting drivers or fans, nor explaining what was wrong with the old system and what’s better about the new one. So what difference will it make?

Will it stop Mercedes taking pole?

The FIA vaguely promised “a faster, more spectacular” championship when the plan was announced on Wednesday. However comments made by Bernie Ecclestone indicated a clear hope the new rules will make it harder for Mercedes to sustain their run of success in qualifying which has seen them take pole position for 36 of the past 38 races.

“I think if we had a different grid we would certainly have different racing,” Ecclestone told Reuters. “It’s no good just seeing Mercedes in the front, without any competition. That’s what I complained about.”

Eric Boullier reinforced this line when speaking to Autosport, “There may be times, though, when Mercedes will miss pole,” he said, “which will be good for the show.”

But if Mercedes enjoy the same performance advantage this year that they did 12 months ago, there is no reason to believe elimination qualifying will make it significantly more difficult for them to take pole position.

In order for Mercedes to fall victim to elimination their rivals will first have to set quicker lap times than them – something which almost never happened during qualifying last year. In the 16 dry Q3 sessions in which Mercedes took pole position in 2015, on 15 occasions their rivals were unable to beat Mercedes’ first run times even later in the session when track conditions had improved.

If Mercedes’ rivals can’t beat the lap times right at the end of Q3 when track conditions are usually at their best, they are not going to be able to beat them by setting their lap times earlier in the session when the conditions are less favourable, which they would need to do in order to force one of the W07s into elimination.

Only once in Q3 last year were Mercedes’ initial lap times beaten by the competition later in Q3. This was in Bahrain, where the Ferraris were quicker on their final runs than Mercedes had been on their first. However the Ferrari drivers set those times in the final minute of qualifying, at which point they had fallen to sixth and seventh places. So under the new rules they would have already been eliminated and not in a position to knock out the Mercedes drivers.

This at least demonstrates that the new system is going to force teams to rethink their tactics.

At present teams go into Q1 and Q2 having studied their rivals’ pace and calculated a target lap time which they need to achieve in order to progress to the next stage. That goal will remain, but teams will also have to consider the need to avoid being the slowest car once eliminations begin.

We will therefore see drivers setting lap times earlier in the session. Under the new system drivers will start being eliminated seven minutes into Q1. In the final qualifying session of last season eight drivers were yet to complete a lap at that point.

Having more cars on track together earlier on will also create more congestion and no doubt more accusations of impeding for the stewards to sort out.

However it may also make drivers less willing to abandon a lap if they find themselves in the slipstream of a rival. Better to set a slightly compromised lap time than back off to find space but risk falling to the bottom of the times and being eliminated.

Teams will choose when to set their first lap in each session based on the expectation of whether they’ll need to do a second. The front-runners can wait until close to the seven-minute mark in Q1 in the expectation that a single good lap will guarantee they go through.

However those expecting to be among the slowest qualifiers will need to make sure they’re able to get back out on track in order to set fresh lap times when the eliminations begin. The first driver eliminated will only have had time to do a single flying lap at most tracks due to the time needed to go in and out of the pits to change tyres and because the current tyres generally give their best grip only on the first lap.

The process will be repeated in Q2 with a slightly tighter time limit putting an even greater premium on nailing that first lap. As is already the case, any drivers who reach Q3 will have to start the race on the same tyres they used to set their fastest time in Q2.

The new format may make the most noticeable difference in Q3. Instead of seeing up to ten cars on-track at once for a final blast, the final 90 seconds will feature just two cars on track, the rest having been eliminated.

At 14 minutes, Q3 is now two minutes longer than last year. That means drivers will be able to get two runs in – providing they stay in the session long enough. Again, those hoping to stay in long enough to remain in contention for the best starting places will have to choose carefully when they run.

More shocks for the show?

It’s not difficult to imagine how the pressures of the elimination system could catch drivers out. Fail to nail that first flying lap in Q2 and you can forget about reaching the top ten shoot-out. An over-running repair job from final practice could now be much more of a problem in Q1.

However the elimination system could also prevent some of the shocks we’ve seen in the past from happening, and you only need to look at the most recent qualifying session for an example.

In Abu Dhabi last year Ferrari misjudged how quick Sebastian Vettel needed to lap to reach Q2. When other drivers went quicker, Vettel was sensationally knocked out in the first round.

Two drivers who had originally set slower times than Vettel – Jenson Button and Felipe Nasr – were among those who posted significant improvements late on and knocked him out of the running. However under the elimination system planned for this year it’s likely they’d have been knocked out before they had the chance to post those improved times.

A big unknown in all this is the effect the new tyre rules will have. Drivers now have the choice of an additional softer compound and whereas last year all the drivers went into qualifying with the same tyre allocations, now they can vary.

Furthermore, the rules require that all the teams have already informed the FIA of their selections for the first four races of the year, so they will not have been able to take these rules into consideration.

Track evolution – the rate at which lap times fall as the racing line becomes cleaner and coated with rubber – will also influence tactics from circuit to circuit. At high-evolution tracks such as street circuits the risks and rewards of setting a lap a late as possible will be greater.

Inevitably there remain areas which need to be clarified. For instance, if two or more drivers are yet to set a time when eliminations begin, which one drops out?

With the first qualifying session of the season just three weeks away and the rule not due to be ratified by the World Motor Sport Council one week from today, there is little time to work out and plan for any unintended consequences. And Formula One Management will need to have new timing software and television graphics ready or the first grand prix.

What will F1 gain from this change? We may see some surprise qualifying eliminations but we already did with the previous system and as explained above this one could prevent some of the shocks we’ve seen in the past. And it’s not going to stop Mercedes sauntering to pole after pole if they still have the performance advantage they enjoyed last year.

More to the point, what was wrong with the old format that suddenly meant it had to go? The knockout system was the product of a six-year period during which time eight significant changes were made to the qualifying rules, and since then has undergone further refinements. It was still able to catch top drivers out from time to time – both Ferrari drivers fell victim to it last year and though it never tripped Mercedes up that was clearly because they had a huge performance advantage.

It’s been widely reported that what Ecclestone was in fact pushing another of his gimmicks which would have seen the most successful drivers given ‘time ballast’, forcing them to start lower down the grid. Fortunately there were enough other people at the table who saw another double points fiasco coming and thought up elimination qualifying as the lesser of two evils.

On paper, that’s about the most positive thing you can say about it. As a solution to F1’s real ills, it doesn’t even merit the term ‘sticking plaster’.