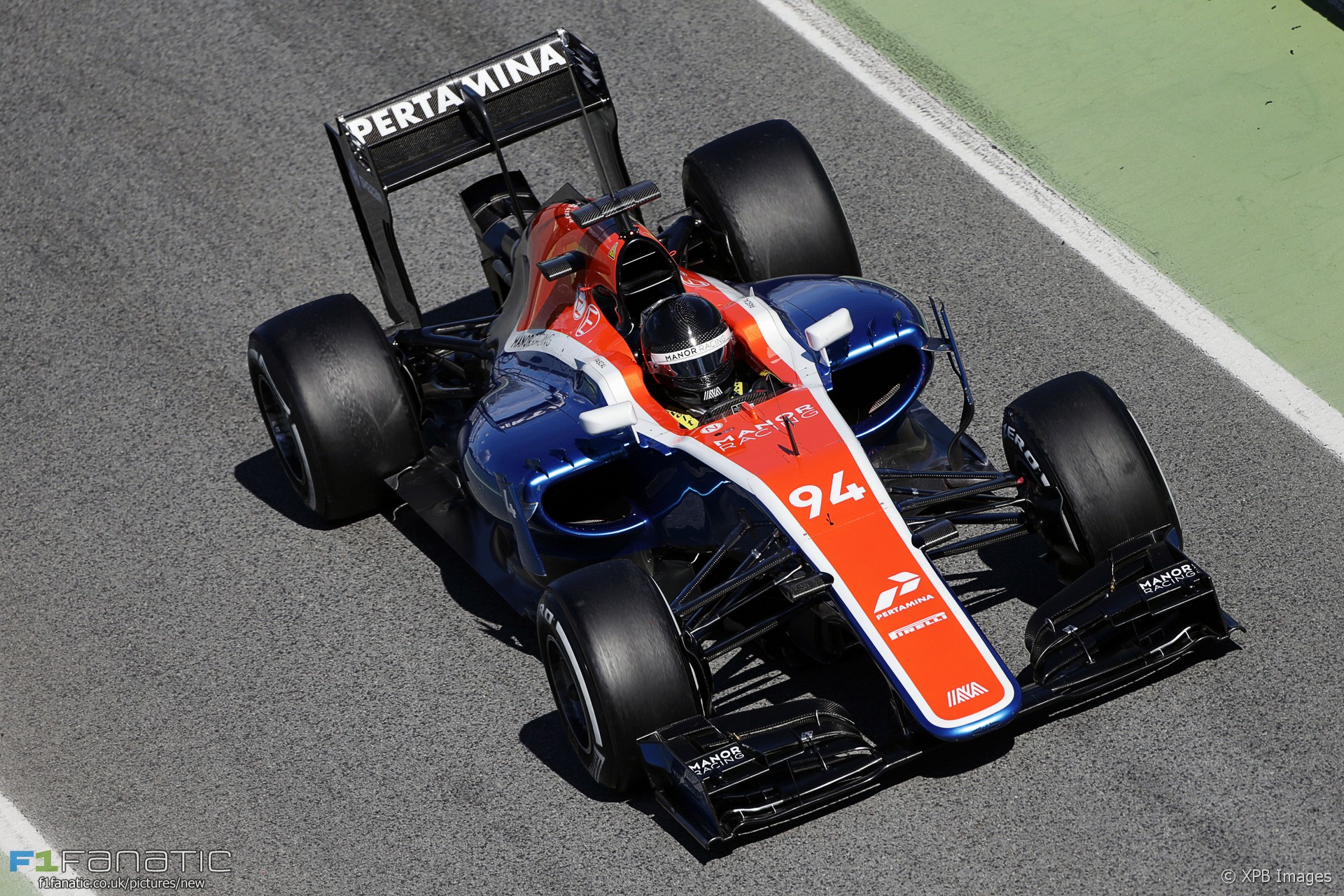 According to Manor the fire extinguisher is the only part the MRT05 shares with its predecessor. This is the team’s first new car since 2014 as they campaigned an updated version of its old chassis last year.

It also marks a departure from Ferrari power: the team’s new Mercedes deal means last year’s tail enders now have F1’s class-leading power unit. The team will also benefit from the arrival of ex-Ferrari staff in its bid to move up the field.

At first glance the new car appears looks like a solid starting point, if a little basic even compared to newcomers Haas. But there is clear scope for development throughout the season.

The nose is the most conventional part of Manor’s car. Last year’s front wing may not be in for an upheaval any time soon and the nose is a simple long length solution.

In what looks like a regression, Manor has even removed the small thumb-tip seen in 2015 which formed a keel underneath the crash structure. Although this may be better at navigating a higher volume of airflow around the front splitter, there may have been some undesired consequences of the design that interrupted other key workings of the front wing.

Currently there are no plans to introduce a short nose at this point and it would be surprising to see something turn up for Melbourne. Perhaps they are going to stick with this concept for the entirety of the season like Ferrari did last year. After all, there will no doubt be new regulations regarding the design of the nose for 2017 so Manor could play this year as a stepping stone towards points rather than an all-out assault.

The mid-section of the car is a complete departure from its predecessor. Starting with the roll hoop area, the airbox now conforms to a traditional design with a rounded triangular inlet that is split into two to feed both the turbocharger and the gearbox oil cooler. Underneath the airbox the monocoque has been heavily sculpted to form a large undercut while two pillars provide the roll hoop with support.

The sidepods have followed this more aggressive path and though they aren’t the most eye-catching on the grid it is a step in the right direction.

The straight-shouldered bodywork from 2015 has been cut away to form a smooth undercut for airflow to pass round towards the back of the car, although the size of the inlet remains unchanged. The rear bodywork is by far the MRT05’s most refined part, with the cooling ‘cannon’ outlets exiting right at the back of the car and the rear suspension elements allowed to pass through the gearbox hidden beneath. The base of the sidepods then cuts beneath these outlets, a common design trait of the current cars which improves aero efficiency.

At the moment the engine cover is quite bulbous and features only a slender shark fin spine to it. However once knowledge of the Mercedes powertrain and its cooling requirements have been built up then Manor can start chiselling around the internals.

Atop the leading edge of the sidepod sit three small vortex generators which differ slightly from those used by some other teams. At their base the vertical vanes are opened to allow air to pass from the inside of the curvature to the outer portion. This will alter the pressure difference across the two sides of the vane as speed increases, changing the characteristics of the vortex the device sheds.

These are in place to assist the downwash of airflow over the bodywork, reducing the buildup of boundary layer flow in process. This cuts drag and benefits the diffuser as cleaner airflow is passing above the floor.

The back of the car sees plenty of small enhancements over the MR03B. The central rear wing pylon and its integration with the new exhaust pipe regulations is particularly eye-catching. Previously a large hoop encompassed the central exhaust outlet but on the MRT05 this hugs very tightly and pokes in between the main outlet and the two flanking wastegate pipes.

Above the exhaust and attached to the pylon is a sleek new monkey seat winglet to draw the hot gases up to the underside of the rear wing. Below there are detail changes to the diffuser Gurney flap along the periphery of the floor. These tweaks will act together to generate an up-wash effect on the air, drawing more air out from underneath and thus pulling the car closer to the ground for more grip.

Looking at the Manor from the rear also reveals work done to the brake ducts, where additional winglets and flick-ups have been installed to induce downforce directly onto the rear tyres.

The rear wing has also received a few tidy upgrades of its own, too. The endplates now follow a popular method for controlling turbulence generated by the rear tyre by cutting two vertical slots into the leading edge, alleviating the high pressure built up on the outer side.

Manor has also moved away from the half-moon shaped slots in the end-plate above the main plane of the wing itself in favour of the more common horizontal design to reduce the size of the wing-tip vortices.