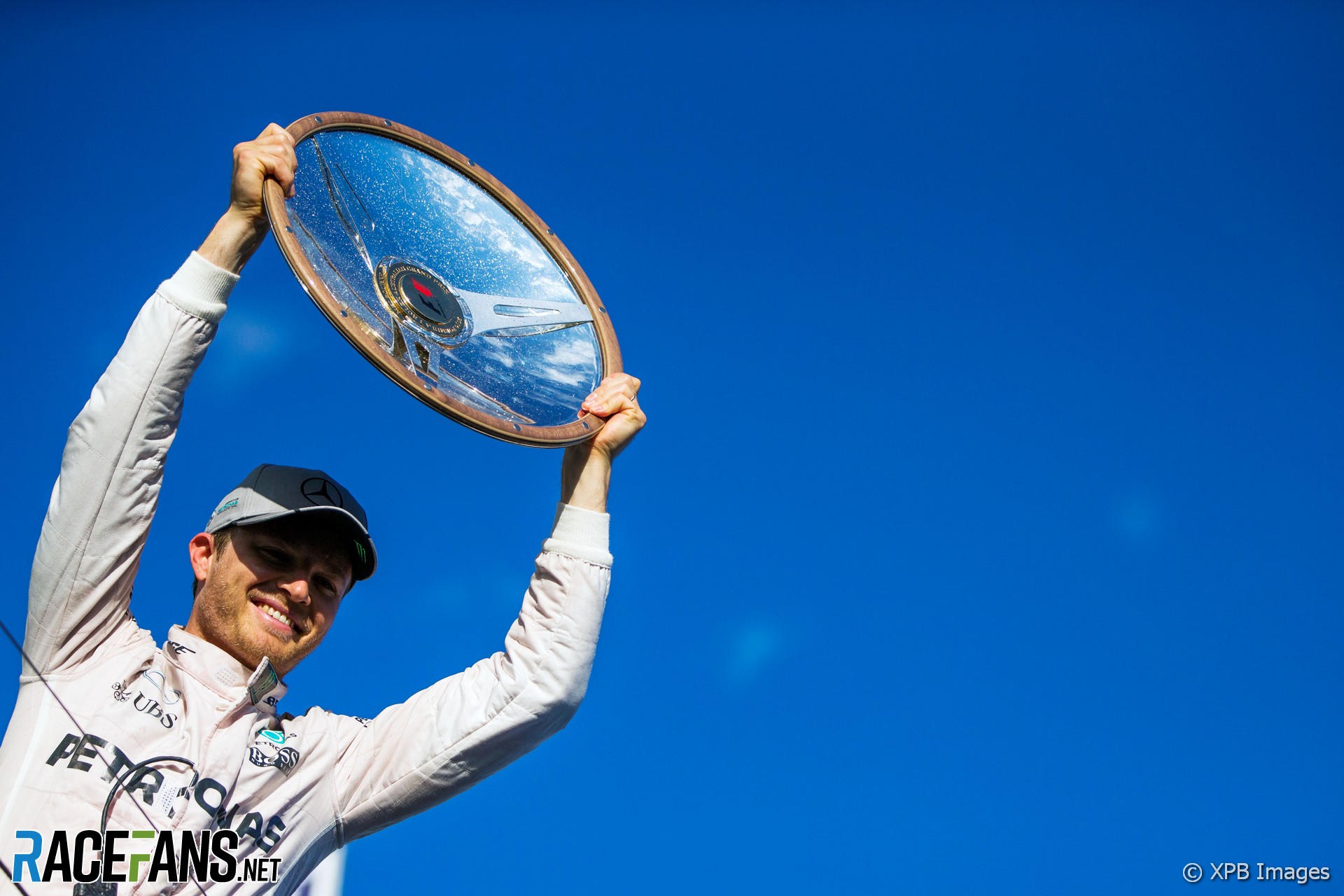 A popular view on Ferrari’s chances in the first race of the season was that the Australian Grand Prix had come a bit too early for them.

The SF16-H is more of a departure from its predecessor than many other cars on the grid. The team hasn’t fully realised its potential and had covered much less ground with it in testing than Mercedes, whose W07 already had over 6,000 kilometres on the clock.

The opening round of the 2016 season bore out that view. The Ferraris stunned Mercedes at the start by capturing the lead. But they passed up the chance to take a free pit stop for Sebastian Vettel when the race was suspended on the 19th lap, uneasy about running the medium-compound tyre.

Mercedes, who got through dozens of sets of the white-marked rubber in testing, went for it and snatched back a victory which had seemed to be getting away from them.

“I’d had a perfect weekend in every way up until the lights went out,” reflected pole sitter Lewis Hamilton. Leading every practice session and all three stages of qualifying quickly proved to be for naught when he got away poorly.

Why had Hamilton got away so poorly? Suspicion naturally fell on the revised starting procedure which now restricts drivers to using only a single clutch paddle instead of two. Hamilton played down the suggestion. The field had also had to cope with going through the pre-start sequence twice due to Daniil Kvyat’s Red Bull breaking down, and as the pole sitter’s car remains stationary the longest it suffers the most.

Whatever the cause, as Hamilton spun his wheels Vettel flashed past him and began squeezing the other Mercedes of Nico Rosberg to the inside. The number six Mercedes locked its tyres as they reached the first corner, turned in behind Vettel and used the full width of the track at the exit, his left-rear wheel brushing Hamilton’s front wing.

While the Mercedes drivers sorted themselves out Kimi Raikkonen had straightened his car up nicely and fired past the pair of them. Max Verstappen and Felipe Massa also took advantage of Hamilton, relegating him to sixth place.

Lap one ended with Vettel already a second and a half to the good ahead of Raikkonen with Rosberg a further second back and Hamilton staring at Massa’s rear wing. Passing a Mercedes customer car threatened to be a tricky proposition, but he was about to get a helping hand.

Kevin Magnussen had picked up a puncture at turn two on the first lap so Renault brought him in for a set of medium tyres. HE reappeared among the leaders and Massa ran wide in the Renault’s slipstream at turn one. Hamilton pounced, lining Massa up at the exit of turn three of all places, and completed the move.

While Vettel continued to lead and Rosberg edged closer to Raikkonen, Hamilton’s next target was fourth-placed Verstappen. But within a few laps he was on the radio to advise his team he couldn’t find a way around the Toro Rosso. “We can just extend the stint,” his team replied – a message which would have been forbidden had it not been for an 11th-hour relaxation of the new radio restrictions.

The first visitors to the pits were clearly planning to pit twice. Rosberg took softs on lap 12 and crucially he just managed to get out in front of Nico Hulkenberg, the leading driver who hadn’t started on super-softs.

The next time by Vettel was in for a second set of super-softs. He too had to get his elbows out when he returned to the track when he found Rosberg bearing down on him. Raikkonen, second, stayed out a further three laps but was urging his team to bring him in.

Raikkonen came in on the same lap as Hamilton, who had been so delayed in the opening stint Vettel had passed him shortly afterwards. Despite bringing their two cars in just four laps apart Mercedes pursued a completely different strategy for Hamilton, perhaps evidence of the greater strategic freedom for their drivers which was hinted at in the off-season.

Hamilton took on a set of medium tyres, meaning the four cars of the top two teams were using three different compounds. This was a promising sign the revamped tyre regulations have indeed introduced new variety to the competition. But which of the competing strategies would have played out best will remain a mystery as a shocking accident brought the action to a sudden stop on lap 18.

“I could see the sky”

Fernando Alonso had left the pits on a fresh set of soft tyres on lap 13 and was catching F1 returnee Esteban Gutierrez at over two seconds per lap. Approaching turn three on lap 17 Alonso jinked left in the Haas driver’s mirrors. Gutierrez was moving the same way and Alonso’s car used his as a launching pad.

The McLaren hit the retaining wall hard, hit the ground and barrel-rolled into the run-off area. It was a frightening accident all-too reminiscent of the 2001 tangle between Jacques Villeneuve and Ralf Schumacher which claimed the life of marshal Graham Beveridge.

Thankfully when the dust settled all were unhurt. “I was in the car flying and bouncing around,” Alonso described afterwards. “I could see the sky, then the ground, then the sky again.”

“Then, when the car landed, I saw a little gap and I got out quickly to make sure that my mum, who was watching the race on TV at home, could see that I was okay.”

Alonso’s mother may have a different opinion, but both drivers and stewards agreed this had been no more than a racing incident. But clearing up the debris left behind required the complete suspension of the race, and the red flags duly flew.

The stoppage was a gift for those who had not pitted yet which, ironically, included Gutierrez’s team mate Grosjean. The race was stopped on lap 18 and as the regulations allow drivers to change tyres (to allow for changes in weather), several teams concluded they could fit mediums and run to the end of the race.

“I was already on a one-stop strategy,” said Hamilton, “and to be honest I don’t know why everyone else didn’t do the same on the medium.”

Ferrari, who have long struggled with tyre warm-up on harder compounds, left both their drivers on the same set of super-soft tyres. Rosberg, who had split the pair of them after his first stop, fitted a set of mediums.

If Rosberg didn’t realise the win was as soon as he spotted the Ferraris on the same set of tyres, it would have been obvious within five laps of the race restarting when Vettel’s lap times began to drop off. Once Vettel made for the pits Rosberg only had to manage his pace to the flag.

The strategic question quickly became academic for Raikkonen. He headed for the pits on lap 21, telling his team “something happened, I broke something”. Flames licked from the airbox as he parked his SF16-H. This from a team which has tended to have excellent reliability was another sign they hadn’t quite been ready for the start of the season.

Toro Rosso had also elected not to change tyres during the suspension and were paying the price. Hamilton was on the tail of Sainz and was beginning to put him on the defensive when the obstacle removed itself – Sainz radioed in “we need to stop” and was immediately brought in.

Verstappen ahead came in on the next lap only to discover his team weren’t ready for him. The time lost and the added disadvantage of losing the ‘undercut’ to his team mate dropped him behind Sainz, a development which infuriated Verstappen.

“I don’t understand why I was not the first one in the garage.” he fumed on the radio after the race. “It’s unbelievable.” Toro Rosso were on the cusp of order a change at one point until Sainz managed to pass Jolyon Palmer and, still pursued by Verstappen, climbed back into the lower reaches of the points.

Verstappen nearly committed the ultimate folly of taking his team mate out, touching Sainz and spinning late in the race, damaging his own front wing.

Having cleared the two Toro Rossos, Hamilton breezed past Ricciardo with DRS and moved back up to second place. This was Ricciardo’s cue to make a final stop for super-soft tyres.

Ricciardo had briefly thought a podium finish might be possible. A superb pass on Hulkenberg in the early laps kept him in touch with the top five, and over the final stint he set the fastest lap and regained a position from Massa. But fourth looked like the limit for him.

Hamilton’s second place briefly came under threat when he ran wide at turn nine on his now rather well-used medium tyres.

“I had 20 laps left and I was like ‘I don’t think these tyres are going to last’ because they started to slide, they got dusty at some point, but they kept going. And then all of a sudden I had that drop, fronts locked and I went a little bit wide at turn nine.”

“Sebastian was on my tail and after that it was so slippery. I’m glad they went the distance, the strategy was great, the team did a great job with that.”

Vettel kept up the pressure on Hamilton until, with two laps to go, he made an error of his own, running onto the grass at turn 15. With that the contest for the podium was settled.

Having made his only change of tyres during the red flag period his team mate had been partly responsible for, Grosjean successful withstood pressure from the Mercedes-powered Hulkenberg and Valtteri Bottas to clinch a superb debut sixth place for Haas. These were the first points for a new team on their debut in 14 years.

The Toro Rossos completed the points positions followed by Palmer, who had impressed with his race craft when going wheel-to-wheel with Bottas earlier in the race. The Williams driver eventually got the better of him with a robust pass at turn nine.

The other Renault of Magnussen followed him home 12th having passed the brake-troubled Sergio Perez three laps from home. Jenson Button’s race never recovered from a strange strategy call to fit new super-softs during the suspension – he finished 14th ahead of Felipe Nasr and Pascal Wehrlein.

The Manor newcomer had held a legitimate 14th place until pitting with unfortunate timing shortly before the Safety Car came out. “Our plan was to have a short stint on the super-soft,” he explained, “which meant we pitted for the soft not long before the crash, so that was a major setback because many of the other cars still hadn’t stopped.”

F1 the way it should be

It remains to be seen whether Formula One 2016-style can continue to provide action of this quality. There were certainly times when the pace of the Mercedes indicated they are going to be very hard to beat.

But from the safety of the cars to the quality of the driving, Sunday at Albert Park showed F1 at its best. It was the perfect answer to the unworthy notion that grand prix racing needs gimmicks like time penalty grids to create exciting races