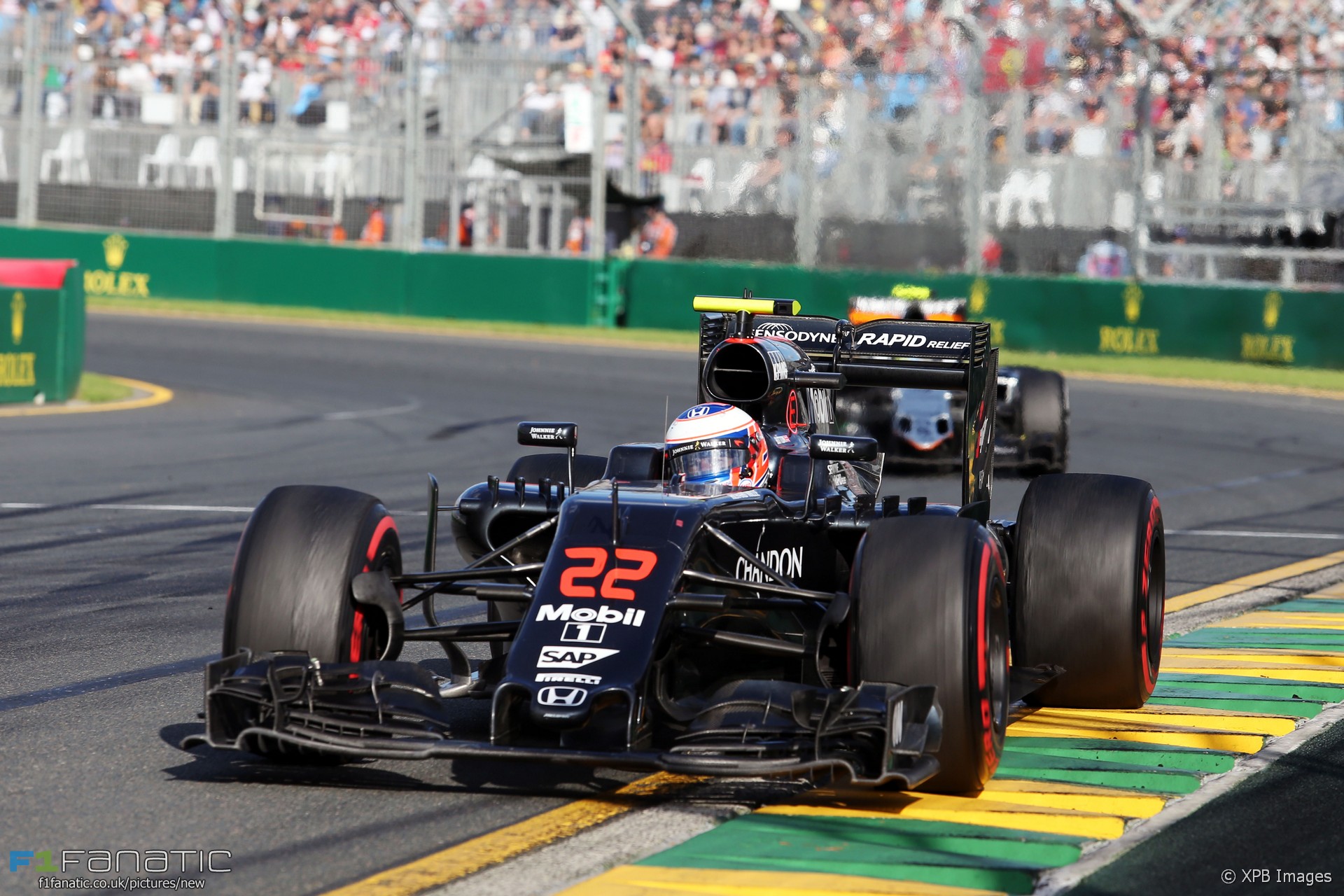 Although Fernando Alonso’s violent accident destroyed McLaren’s best chances in the Australian Grand Prix, the team has already made a clear step forward from its disastrous 2015 campaign.

Both MP4-31s made it through the first phase of qualifying and Alonso was in the hunt for a points-scoring finish when his race ended following contact with Esteban Gutierrez.

Honda’s architectural changes to the engine go some way towards experiencing these gains. But fuel supplier Esso and lubricant manufacturer Mobil 1 also takes some of the credit for McLaren’s improved competitiveness.

F1 Fanatic spoke to Mobil 1’s global motorsport technology manager Bruce Crawley at the final pre-season test to find out more about how they managed the switch from Mercedes to Honda last year, and when the gains can be made with fuel and lubricants in 2016

Was it difficult to enter the V6-era with Mercedes engines when McLaren’s long-term plan was always Honda?
Yeah, it was quite difficult. In the last season with Mercedes engines, both parties obviously knew that the partnership was coming to an end and that there was a new engine partner coming in on the horizon. It was quite difficult from an intellectual property point of view, because neither side wanted to give away anything that the might subsequently be wanting to use.

Were you having to be actively careful about what you were communicating with Mercedes?
Yes, indeed. And it was difficult as well from their side – they didn’t want to reveal their hand. It was a tough final year, I would say. But it was professionally handled. We’re both professional companies. But it wasn’t an ideal partnership situation.

Has the fact that Honda are based in Japan provided any challenges for you?
It’s slightly more challenging, because of the logistics. We’re doing quite a bit of testing work in Sakura – Honda’s R&D facility in Japan. So from a logistics point of view, moving products across the other side of the world… that takes a little bit more time than the UK base. But I don’t think that’s really affected us too much at all. And we are doing testing at Milton Keynes at Honda’s test facility there. So we’ve managed to deal with that situation. So I don’t think it really has harmed us particularly.

Is there ever such a thing as a trade-off between reliability and performance when it comes to developing new fuel and lubricants for McLaren?
There has been in the past. So if you go back into the V8 era. When we moved from refuelling to no refuelling in the V8 era, that put slightly more emphasis on fuel efficiency than previously. So at that point we then started to look at fuel efficiency more than just pure power output. At the moment, where we are, because the fuel quantity is fixed to 100kg and 100kg-per-hour fuel flow rate, it really is all about trying to get as much power out of the fuel as you possibly can.

We do look at secondary effects like density of the fuel – so the amount of volume. We do look at that. Currently, the trade-off is insignificant in terms of overall performance of the car, but we do look at those things. In terms of reliability, the most important thing for us is power degradation. So what we’re looking to do is to minimise any degradation effects. What you’re looking for is the power you get out of an engine at zero kilometres is the same as the power you get at the end of the engine life.

Is there much horsepower loss from an engine fresh off the dyno to the end of four races?
You will lose some horsepower, but we look at that very carefully. So where is that power being lost and can you prevent that happening. From a Mobil 1 engine oil and fuel point of view, fuel and oil can affect the degradation of the engine. Not only are we looking at power out of a fresh engine but we’re also looking at keeping that power. Again, that’s something we’ve been working on for many years so we’re well aware of the effects that can occur. And we’re not trading that off.

Is that the kind of improvement you expect to see year to year?
Right now we’re in a very interesting time, because we have a new power unit regulation and we have a new engine manufacturer to work with. So we’re in our second year of development, really, with Honda. So it’s very interesting from that point of view. So the gains that are available at the beginning of any era than at the end of an era. For example, at the end of the V8 era, it was very difficult to find gains. We were still making gains on fuel, even right up to the end. It is just continuous improvement. We never stop. There’s always something to be discovered. If there wasn’t I wouldn’t be sitting here in front of you, I wouldn’t have a job. Our objective is finding ways of making the car go faster, and if we can’t do that, we’re done. So there’s a lot of gains to be made at the moment and my crystal ball says that there’d be quite a few monre.

33 comments on “Fuel upgrades helping McLaren and Honda catch up”