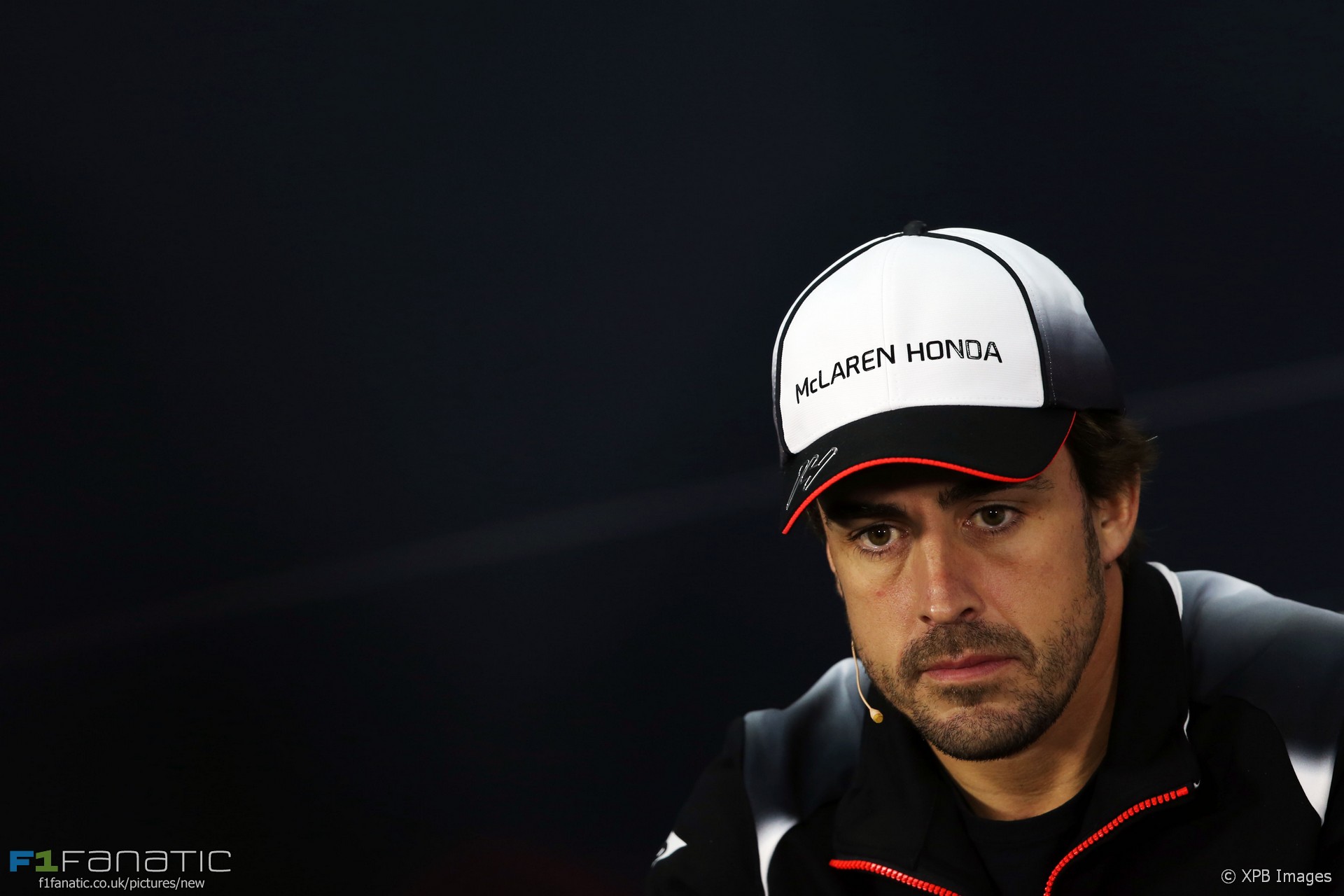 Fernando Alonso confirmed a rib fracture has kept him from competing in this weekend’s Bahrain Grand Prix and the injury could also rule him out of the next race in China.

The McLaren driver was ruled out of action for the upcoming weekend following a medical evaluation at the circuit. Alonso told reporters in the FIA press conference he was “a little bit disappointed, obviously”.

“We want to race, we are competitive drivers so when you come here and you can’t even try it’s always said but it’s understandable. I respect the decision, I try until the last moment to be able to race and at least to try in the practice.”

Alonso said he was prepared to attempt to cope with his pain levels inside the car but concerns over the potential consequences of a further injury to the ribs have kept him out.

“There have been some painful days, some pain at home,” he said. “But I was ready to go through this pain somehow in the car and make sure that I could race because at the end of the day the pain is manageable if you don’t think too much and adrenaline driving.”

“But there are some other risks, the doctors think. It’s a risk management and minimise everything is the logic of things. A little bit sad for that but it’s the only way to go.”

Alonso admitted he’s “not a hundred percent” certain whether he’ll be able to start the Chinese Grand Prix in two weeks’ time. A further FIA evaluation will be required before then.

“The risks are very, very small but I understand that we all want zero risk. It’s just a question of time that the rib go a little bit together. For this is the next ten days, should be OK, but we can’t guarantee it. Maybe ten, maybe five, maybe twelve but it’s just a normal rib.

The crash left Alonso with minor pneumothorax – sometimes referred to as a collapsed lung – which was diagnosed after he returned to Spain last week.

“I was OK Sunday, some knee pain but not big things,” said Alonso. “I had the green light from the doctors to leave the track and everything was OK. On Monday I had a little bit of overall pain but nothing too serous.”

“And then I flew back, I arrived in Spain, the pain was similar or a little bit more so we decided to do a proper check, [CT] scan. And I had a small pneumothorax on the lung.”

“So we took the advice from the doctors to relax at home and make everything come to normal and we repeat the scan last Monday. The pneumothorax is gone, more or less, but I have some rib fractures.”

“So because of that the risk of driving, because Formula One is a very unique sport, unique position on the car and the G-forces, a fracture could move that into the lung as well. So it’s not like a broken leg or a broken arm that you can deal with the pain, this is in the chest, there are some organs there and we cannot do much more.”

Despite being unable to drive this weekend Alonso says he will remain at the circuit.

“The team told me ‘you will fly back home’ but I said no way. I want to hear the cars, I want to help Stoffel [Vandoorne], I want to see there new updates in the car, how they work.”

While the McLaren’s seat was reported to have broken in the impact, Alonso said his injuries were caused by the severity of the G-forces experienced during the crash.