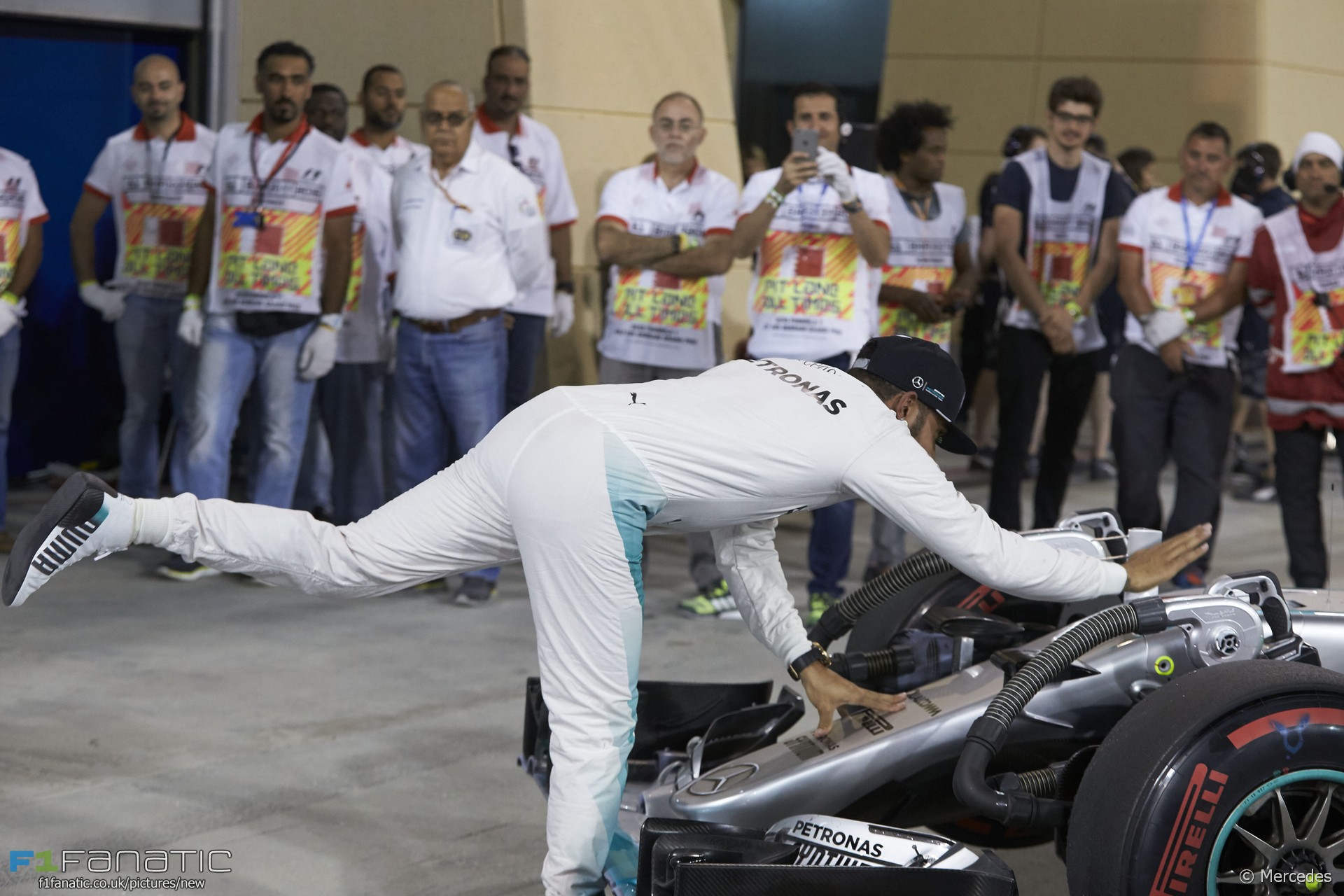 Lewis Hamilton set the fastest lap ever seen at a Bahrain Grand Prix weekend to claim pole position for the second race of 2016.

Hamilton was left with it all to do after an error on his first run in Q3 meant he began his final run in fourth place behind the Ferraris.

However doubts over Formula One’s elimination qualifying format were not dispelled by its second running, which again saw several long periods of inactivity.

The first car made its way to the pit lane exit two minutes before Q1 was due to begin. Sebastian Vettel took up the head of the queue followed by the two Mercedes drivers and joined soon afterwards by the other Ferrari.

Within three minutes of the session starting almost every driver had set a time and the front runners were already on their way back to the pits where they spent the next quarter of an hour. That left a handful of cars on track to sort out the minor positions.

Felipe Nasr and Rio Haryanto were swiftly ejected, neither having sufficient time to rejoin the track and run again. Nasr locked up at turn one during his sole run, leaving him last.

The next man to drop was Jolyon Palmer who did manage to squeeze in a second run. But it was only quick enough to move him ahead of Stoffel Vandoorne, who immediately pushed him back down again and progressed to Q2.

Pascal Wehrlein had enough time to get his Manor up to a strong 16th, leaving Sergio Perez by the wayside in the process. The second Renault of Kevin Magnussen was also eliminated, though the stewards have already ruled he will start the race from the pits.

Much the same procedure was repeated at the beginning of Q2, only this time it was Raikkonen’s turn to lead the Mercedes around – and Vettel managed to beat one of them. A slight mistake by Rosberg at turn ten left him almost half a second off Hamilton’s time, and allowed Vettel to take advantage as well.

Daniil Kvyat, Jenson Button, Esteban Gutierrez and Stoffel Vandoorne were eliminated without any of them setting a further lap time. That guaranteed Vandoorne will make his F1 debut having out-qualified his world champion team mate.

Nico Hulkenberg found time to improve and claim a place in Q3, ensuring the two Toro Rossos also droped out and denying Romain Grosjean’s Haas a place in the final eight.

Rosberg regained the initiative with the first round of laps in Q3, ducking under the 90-second barrier as Mercedes unleashed the full potential of their W07.

Hamilton had looked on course to at least match his team mate, but he ran wide at the exit of the final corner and was dragged wide onto the run-off, losing several tenths. The Ferrari pair took advantage, which left Hamilton scrambling to begin his final lap before the eliminations caught up with him.

Hulkenberg, the Williams drivers and Daniel Ricciardo were the first to go before Hamilton got it together. His final effort was impeccable – error-free and searingly fast.

Mark Webber’s track record of 1’29.527, which has stood since 2005 when F1 cars were powered by three-litre V10 engines, fell when the W07 crossed the line. “That was a sexy lap” exclaimed Hamilton after beating Webber’s effort by three-hundredths of a second.

Rosberg very nearly beat it as well – his final effort left him within a tenth of a second of Hamilton. Vettel was left ruing his own mistake at the final corner, but it likely did not account for the half-second difference between him and the pole sitter.