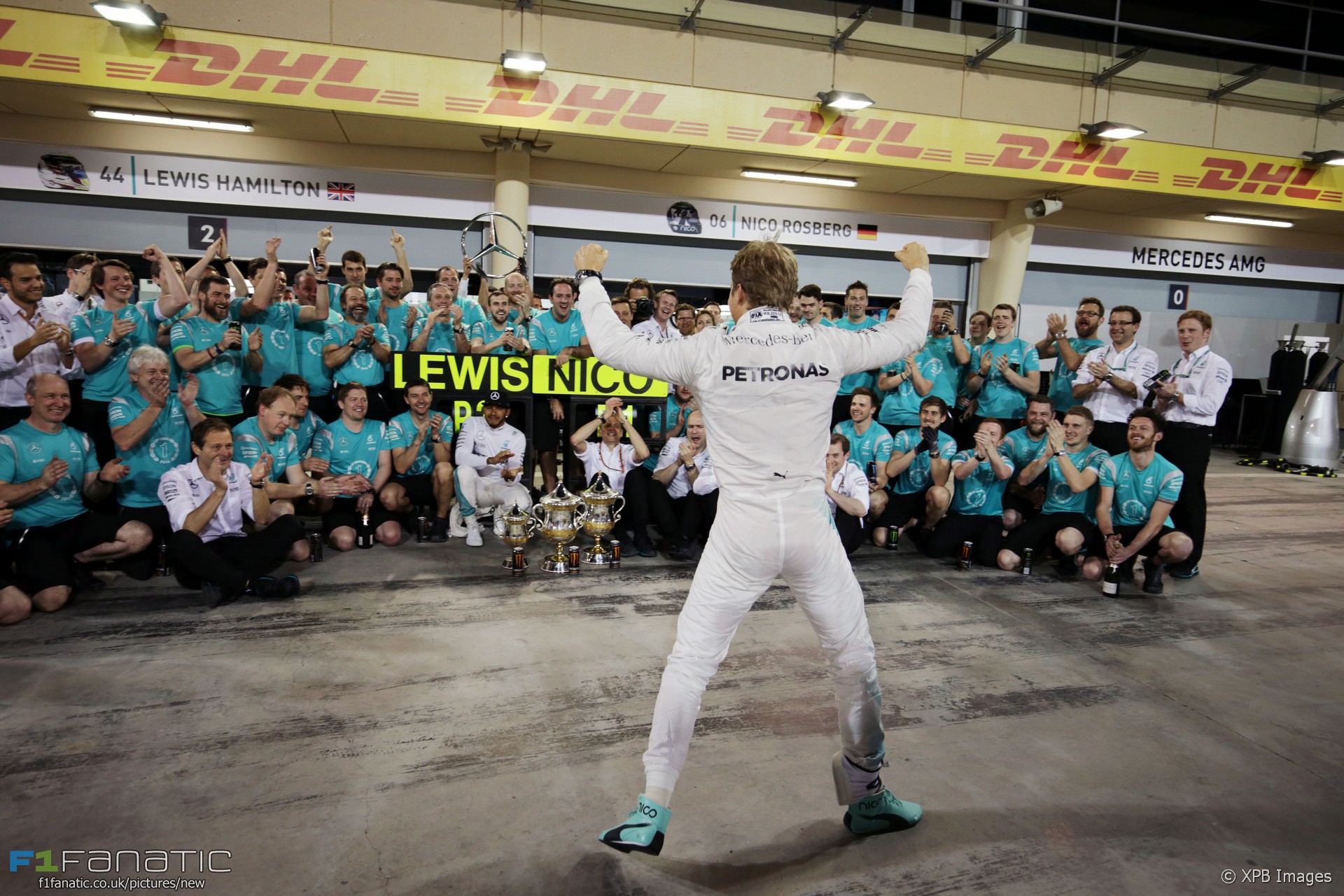 Win number 16 for Nico Rosberg means he has now taken as many grand prix victories as Stirling Moss. In terms of race wins, the pair are the most successful drivers of all time never to have won a world championship. Both scored their first wins with Mercedes but while that was Moss’s only victory for the team all of Rosberg’s victories have come for the three-pointed star.

Rosberg marked the tenth anniversary of his F1 debut by winning the Bahrain Grand Prix for the first time in his career. This was Rosberg’s fifth consecutive victory, making him only their eighth driver in world championship history to do so.

Just three years ago this was a feat only five drivers had achieved. Since then Sebastian Vettel, Lewis Hamilton and now Rosberg have joined the five-in-a-row club:

With Lewis Hamilton slipping to third place Mercedes missed out on their chance to become the first team to score six consecutive one-two finishes. However they did lock out the front row of the grid for the eighth race running and take their fourth consecutive Bahrain Grand Prix pole position.

Hamilton’s 51st career pole position means he is still has a chance of reaching Michael Schumacher’s all-time record of 68 before the end of the season. This was his second Bahrain pole.

His 1’29.493 lap was the fastest ever seen in Bahrain, breaking Mark Webber’s 2005 record by 34 thousandths of a second. Webber set the time during fourth practice for the 2005 race in a Williams FW27 with a V10 BMW engine.

However in race pace terms F1 is still almost four-and-a-half seconds per lap slower than it was 11 years ago. Yesterday’s race ran Safety Car-free in the evening cool and took 93 minutes, 34.696 seconds; the 2005 race also stayed green throughout, and in blazing heat with refuelling pit stops it took 89 minutes, 18.531 seconds.

To put it another way, Rosberg would have finished the 2005 race 11th behind Tiago Monteiro’s Jordan.

Starts remain a problem for Hamilton, however. He has given away 11 places on lap one in the first two races of the year combined – just one less than he lost in all 19 of his starts last year. His 2016 record so far reads two pole positions, one lap led and zero wins – something which will surely change soon.

Kimi Raikkonen split the Mercedes drivers on the podium, finishing second for the fourth time in the last five Bahrain Grands Prix. He has now taken eight podiums in his 11 Bahrain Grand Prix appearances without winning the race. That matches Fernando Alonso’s feat of taking eight podiums in Brazil without a victory.

Stoffel Vandoorne became the 75th driver to score a point on his debut after being drafted in to replace Fernando Alonso. Note that there were other drivers who scored top ten finishes on their debut but did not score points due to the different systems used in the past.

Vandoorne is the 21st Belgian driver to start an F1 race and the first since Jerome D’Ambrosio in the 2012 Italian Grand Prix. This was only the second time a Belgian driver has raced for McLaren in F1. The sole previous occasion was the 1973 German Grand Prix when Jacky Ickx finished third for them at the Nurburgring when his regular team Ferrari chose not to attend the German Grand Prix. Belgians therefore have a 100% points-scoring rate for McLaren.

Vandoorne’s race number 47 had never previously been used in a world championship race run to F1 rules. Chuck Weyant raced as number 47 in the 1959 Indianapolis 500, which did count towards the championship, but this was not a Formula One race. Coincidentally, Weyant’s 93rd birthday was on race day.

Like Rosberg, Toro Rosso also marked the tenth anniversary of their F1 debut with a Bahrain breakthrough. Max Verstappen’s sixth place was their first ever points finish in Bahrain.

Finally, Haas incredibly went one better than their debut as Romain Grosjean took fifth place. That moves him up to fifth in the drivers championship (tied on points with Raikkonen who is fourth by dint of having a higher best finishing position). This is the highest place Grosjean has ever occupied: his previous best was seventh in 2012 and 2013 while with Lotus.