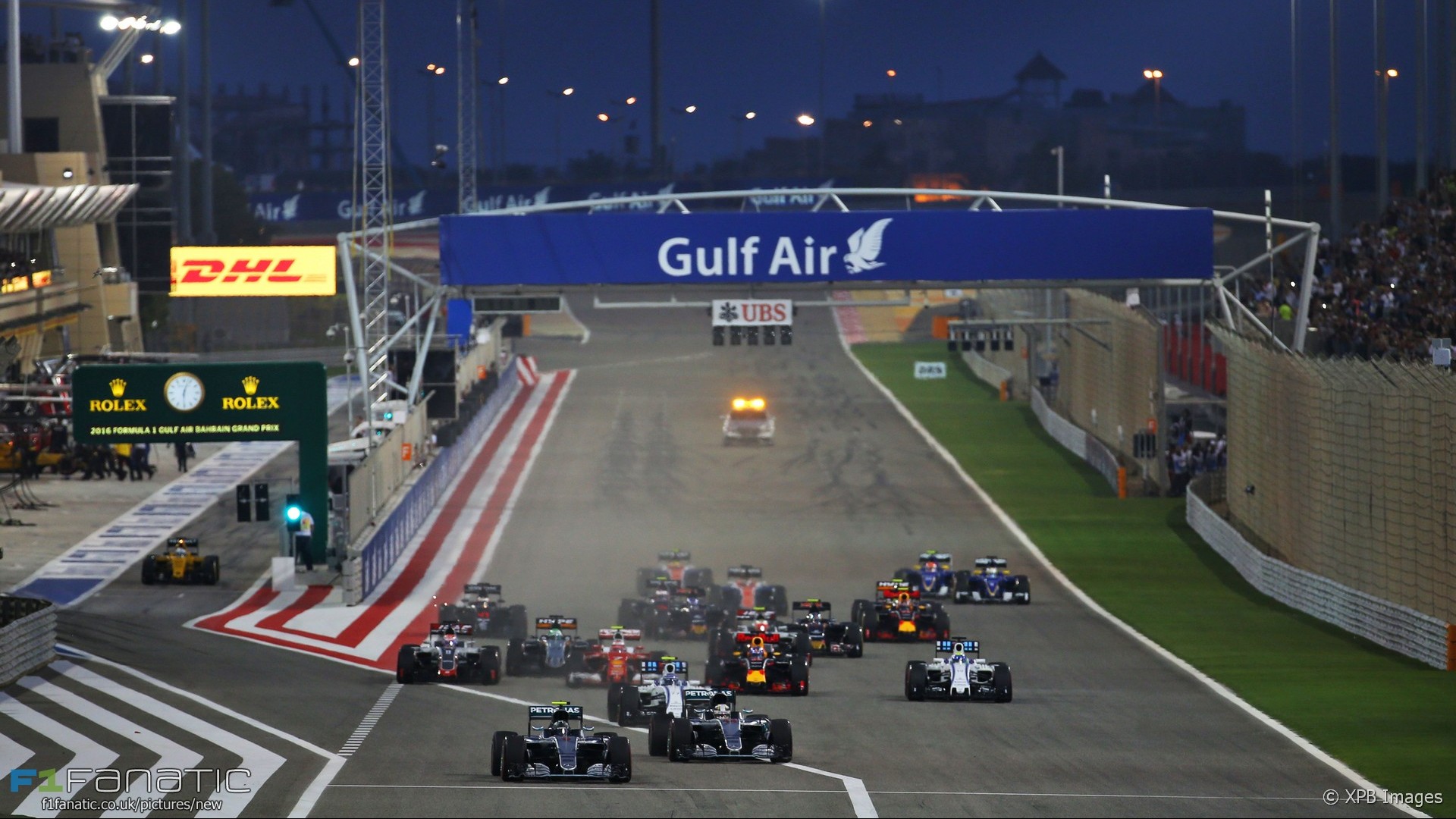 Lewis Hamilton – Said his pole position lap was his first clean lap of the weekend – although he did top the times in Q2 as well. His start wasn’t up to scratch again but Bottas did the most damage to his race by clattering into him. Carried floor damage for the rest of the race which probably cost him a few tenths more than his 0.195s lap time deficit to Rosberg. Third was probably the best the car could do given that.

Nico Rosberg – “I was sure that I had got pole when I crossed the line” said Rosberg – he was less than a tenth of a second away from Hamilton and joined him on the front row again. He got away more cleanly than his team mate and as his closest rivals had all hit trouble before the race was a lap old he motored on to an untroubled win.

Sebastian Vettel – Lost a quarter of an hour’s running in second practice due to a suspension problem. In qualifying he made a slight mistake at the last corner but he was never going to find the half-second gap to Mercedes. His race prospects ended on the formation lap when the Ferrari motor expired.

Kimi Raikkonen – The gap between Raikkonen and his team mate ahead widened during qualifying but he claimed fourth on the grid which became third when Vettel’s car died. However a slow start dropped him to fifth and by the time he had DRS’d past the likes of Ricciardo and Massa, Rosberg was too far up the road to be caught.

Felipe Massa – Williams only had one example of their new front wing for Bahrain and Massa received it by dint of being their leading driver in the championship going into the weekend. It proved a mixed blessing: the new part only arrived in time for final practice and although it gave the car a stronger front end it left Massa scrambling to rebalance the FW38. Having grabbed second at the start he slipped back on medium tyres and an error while being lapped by Rosberg opened the door for Kvyat to push him down to eighth.

Valtteri Bottas – A much better qualifying performance than in Australia but not enough to keep Red Bull from beating Williams to fifth place. He made a stunning start followed by an uncharacteristically ambitious move on Hamilton which failed to pay off and earned him a drive-through penalty. Had much better pace than Massa on medium and soft tyres but ended up ninth.

Daniel Ricciardo – A stellar qualifying lap saw Ricciardo claim fifth place on the grid despite having the fifth-slowest car in a straight line (albeit the fastest Renault). He tried to take advantage of the turn one chaos but ended up hitting Bottas with his front wing. The team elected not to change it – another indication the RB12 generates prodigious amounts of downforce. A very early change to soft tyres allowed him to use the undercut to his advantage throughout the rest of the race, and brought the car home a fine fourth once again.

Daniil Kvyat – Dejected after another disappointing run in qualifying – although he went out in Q2 instead of Q1 he still lined up ten places behind his team mate. “We were pretty much nowhere,” he admitted. The race went much better: he made up three places at the start and ran a long opening stint to give him the benefit of fresher tyres while others were on more worn rubber. This helped him pass rivals despite the Red Bull’s lack of straight-line speed, and an opportunistic move on Massa netted a damage-limiting seventh.

Nico Hulkenberg – Overnight tweaks ahead of qualifying paid off: “During qualifying the car just got better and better, and I think the track improvement came towards us as well,” he said. The reward was a place in Q3 – and its accompanying disadvantage of having to start the race on used tyres. He only made slight contact at turn one with his front wing but the team felt it necessary to pit him, ended his chance of points.

Sergio Perez – Said he was “unlucky” to drop out in Q3 after being eliminated by an improvement by Wehrlein. He made a terrific start, gaining six places, then threw it away with a careless move on Sainz on lap two. “I was in his tow and when I went onto the marbles on the inside I just couldn’t stop the car enough,” he admitted.

Kevin Magnussen – Drove through a red light in second practice when being called into the weigh bridge. The team failed to notice the oversight and the result was Magnussen had to start the race from the pits. He made up 11 places in the race – as many as he could without earning a point. “We were so close to scoring points,” he said afterwards, “it’s frustrating to think what could have been had we not incurred a penalty”.

Jolyon Palmer – Renault’s pace was much weaker in Bahrain but Palmer qualified just a couple of tenths off his team mate. However he failed to start the race due to a hydraulic problem.

Max Verstappen – There wasn’t much to choose between the Toro Rossos in qualifying – Verstappen edged Sainz by just four-hundredths of a second. The pair fought hard on the first lap but Verstappen, running the super-soft tyres, prevailed. A long third stint on medium tyres allowed him to attack in the final stint on super-softs, although they were dropping off qualifying at the end of the race. He took sixth off Massa but ran out of time to get Grosjean.

Carlos Sainz Jnr – Sainz would have started ahead of Verstappen if he’d been able to replicate his Q1 lap time in Q2. Starting on the soft tyres meant he was immediately under attack at the start, and his race was ruined when he was hit by Perez.

Marcus Ericsson – Felt happy with his set-up but wasn’t able to make the cut for Q2 and lined up behind Wehrlein. Said a power loss restricted him on the opening lap, and was preoccupied with saving fuel at the end of the race.

Felipe Nasr – The first driver to drop out in qualifying, Nasr was very unhappy with the balance of his Sauber. After a strong start he kept Ericsson behind to begin with but dropped behind his team mate before the end.

Stoffel Vandoorne – Called up to take Alonso’s place on Thursday, Vandoorne spent the flight to Bahrain familiarising himself with the MP4-31’s controls and on Saturday placed himself ahead of Button on the grid. His opening lap wasn’t the best – Button slipped by him at turn ten, then at the final corner Vandoorne out-braked himself and did well to recover the positions he lost. After that he settled in and produced a strong drive, taking advantage of McLaren’s much-improved pace to claim a well-earned point.

Jenson Button – An encouraging third-quickest for McLaren on Friday only translated into 14th place on the grid. But the race was a case of what might have been: he was running within DRS range of Verstappen, who went on to finish sixth, when the Honda power unit failed.

Pascal Wehrlein – Starred in qualifying by placing his Manor an excellent 16th on the grid. He improved on that in the race, taking advantage of the opportunity to race against and pass the Force Indias, and professed himself happier with Manor’s tyre degradation.

Rio Haryanto – Disappointed to be the second driver out in Q1 having been satisfied with the MRT05’s handling in final practice. Saw the chequered flag for the first time this year, albeit well behind his team mate.

Romain Grosjean – Haas could have made it into Q3 but Grosjean admitted he was pleased to lose the place to Hulkenberg, which meant he could start the race on new tyres. The team used that to great effect during the race, running three super-soft stints which allowed Grosjean to attack. Clearly revelling in the car, he took on and passed the likes of Massa and Ricciardo, though he had to settle for fifth behind the latter.

Esteban Gutierrez – Only a tenth of a second slower than Grosjean but that meant he started four places further back. Gutierrez made a brilliant start but was again doomed not to finish, this time due to a suspected brake disc problem.

Who was the best driver of the 2016 Bahrain Grand Prix weekend?