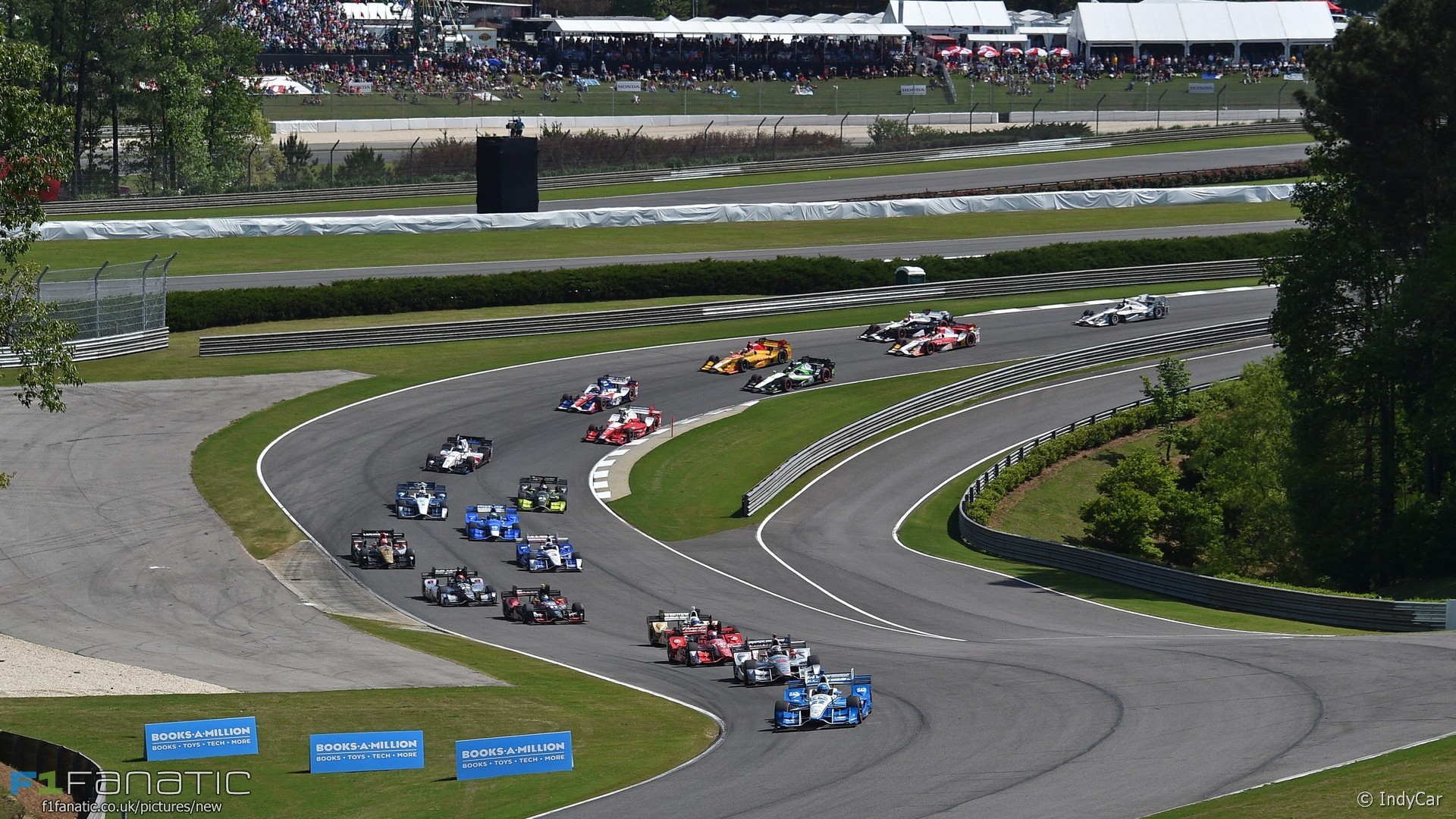 The World Rally Championship returned with a bang in Argentina after a seven-week break, and after a dramatic ending to the rally, a brand new winner took the spoils.

Elsewhere the World Touring Car Championship, European F3 and Formula V8 3.5 races were struck by bad weather at the Hungaroring while Formula E had their first race around the streets of Paris. Stoffel Vandoorne was in action in Super Formula as the series kicked off for 2016; and in America both IndyCar and NASCAR saw late-race contact.

Though Simon Pagenaud’s breakthrough Penske victory at Long Beach was overshadowed by a controversial stewards’ call, the same couldn’t be said for his follow-up victory following a tense scrap with Graham Rahal at Barber Motorsports Park.

Pagenaud led from pole position but his lead was twice eradicated by lengthy spells in traffic. That initially brought team mate Will Power onto his tail, but Rahal split the Penskes at the final round of pit stops and the Honda-powered driver took the fight to Pagenaud over the final laps.

Rahal, who had saved his push-to-pass boosts for a late attack, pounced on Pagenaud and made contact as he took the lead – the stewards deemed it a racing incident. Pagenaud fought back, pressuring Rahal into tangling with the lapped Jack Hawksworth and suffering front wing damage which costs him the lead a few corners later.

Rahal might have lost another place to Power but the Penske man fell victim to Josef Newgarden in the final laps – last year’s winner passing Power twice during the course of the 90-lap race.

Juan Pablo Montoya made it three Penskes in the top five despite having started last after failing to get the soft tyres to work in qualifying.

Hayden Paddon became the first New Zealander to win a round of the World Rally Championship in a dramatic Rally Argentina. Paddon was in the fight at the front from day one, and come Saturday he and Jari-Matti Latvala edged away from world champion Sebastien Ogier. The gap fluctuated between the top two but Latvala just had enough in hand until a dramatic crash on stage 14 handed Paddon a surprise lead into the final day.

Mechanical problems hindered Paddon’s progress in the first of Sunday’s three stages, and a tentative run through the penultimate stage saw Ogier slash the gap to just 2.6 seconds. Come the final stage however Paddon showed his metal, with a time good enough to not only win the stage and the rally along with it.

Naoki Yamamoto led from lights to flag in the opening round of the season while McLaren reserve Stoffel Vandoorne took a maiden podium on his first outing.

Yamamoto pulled a three second gap early on and even second placed Yuji Kunimoto’s attempt at an undercut couldn’t deny the Team Mugen driver as he finished runner-up, with Vandoorne third. Meanwhile it was a bad day for former F1 drivers; Kazuki Nakajima could only manage twelfth, Kamui Kobayashi had a loosely fitted right-rear that required an early pit stop, and Narain Kathikeyan’s car gave up all together following his trip to the pit lane.

The first race of the weekend began without Nikita Mazepin. The Force India junior driver was banned from taking part following an altercation with Calum Illot in the paddock after practice which left his rival with a bruised face.

Maximilian Gunther took pole position for all three races in Hungary, but could only convert one as he duplicated his results from the opening weekend. George Russell jumped him at the start of race one, but tyre problems meant he lost his lead to eventual winner Ralf Aron. The Safety Car was deployed following a clash between Callum Ilott and Ben Barnicoat, after which Niko Kari and Joel Eriksson joined Aron on an all-rookie podium.

In race two Gunther learned his lesson, and kept his lead from the lights all the way through until the end of the race. Aron produced another strong performance to finish as runner-up, while Ferrari-backed Guan Yu Zhou passed Russell for third on lap eleven.

Heavy rain on Sunday meant race three began behind the Safety Car, protecting Gunther’s pole position. The race went green after two laps and soon after Russell launched a surprise attack on Gunther. Contact was made and both retired, handing victory to Ben Barnicoat. Eriksson took second and Lance Stroll passed Zhou on lap nine for an eventual third.

WTCC shared a billing with F3 at the Hungaroring but both its races were run in wet conditions. Mehdi Bennani took his second career win ahead of Loeb Racing team-mate Tom Chilton in the damp opener.

The Moroccan led from the reverse-grid pole on wet tyres when others chose slicks or a combination of the two, while Chilton made his way up from tenth on the grid. The Citroens of Jose Maria Lopez and Yvan Muller opted for slicks, a choice that proved to be a mistake with both eventually pitting – this the first race since their entry that the works Citroens failed to score. Lada scored their best result with Nicky Catsburg third, Gabriele Tarquini fifth (having pitted on the formation lap to fit wets) and Hugo Valente sixth.

If race one was damp, then race two was sodden. Lopez took the win from pole ahead of Muller, atoning for their strategy error in the opener. Muller started from the lower reaches of the top ten, but made a storming start to finish the first lap in second place, by which time the safety car was deployed to clear Gregoire Demoustier’s crashed Citroen.

Third-placed Rob Huff was quick off the restart and looked inside Muller, who then moved across. Contact was made pushing Muller wide, and Huff closed right up to Lopez for the lead, before being given a controversial penalty for the incident. Lopez and Muller then continued unhindered, with Tiago Monteiro completing the podium 15 seconds behind.

Lucas di Grassi took his second victory in as many races, dominating in the first ever Paris ePrix. He took the lead from pole sitter Sam Bird at turn one, holding the lead thereafter.

The DS Virgin and Renault eDams pairings were line astern behind the Abt Audi for much of their home race, including when Bird made contact with team mate Jean-Eric Vergne. Sebastien Buemi piled the pressure on Bird who cracked with five laps to go, locking up and overshooting turn one. A swift U-turn meant he only dropped to sixth. Ma Qing Hua crashed heavily moments later bringing out a Safety Car, and the lengthy recovery meant the race came to an anti-climactic end.

Carl Edwards pushed team-mate Kyle Busch aside to get past in the final corner at Richmond International Speedway. His second win in as many races came after leading 151 laps, meaning the two Joe Gibbs drivers have won all four races in the month of April. Tony Stewart returned after a back injury, but suffered a cut tyre on lap 268 in a race that included eight cautions and eight different leaders.

Tom Dillmann led the points standings after following Johnny Cecotto Jnr home in race one, but was fuming at himself after throwing the lead away following a Safety Car period. Ironically the interruption was caused by his team mate Alfonso Celis Jnr who triggered a collision with Egor Orudzhev.

Third place went to Louis Deletraz, who pressurised Dillmann until the end, but was challenged both by the tight Hungaroring track and a fuel leak which filled his cockpit with fumes.

Dillmann made amends in a soaking wet race two despite again losing the lead, this time to Matthieu Vaxiviere. The mandatory pit stop caught out Vaxiviere whose advantage was eradicated by a Safety Car appearance after several of his rivals had already pitted.

Roy Nissany spun out of second place as the race got underway but fought his way back to finish in the same position, applying huge pressure to Dillmann over the final laps. Dillmann hung on to give AVF their first victory in the category, and became the fourth difference winner in as many races.

Aurelien Panis took third ahead of Deletraz while Vaxiviere recovered to fifth.

Valentino Rossi became the first non-Spanish rider to win a race in Moto GP this season – ironically at Jerez in Spain – as he led from pole position to the chequered flag. Rossi was largely unchallenged in the race after seeing off a brief attack from team mate Jorge Lorenzo. Rossi and Lorenzo completed the first Yamaha one-two of the season but Marc Marquez sustained his points lead by joining them on the podium.

Next weekend Formula One heads to Russia, while both NASCAR and IMSA have another round apiece over in the United States.