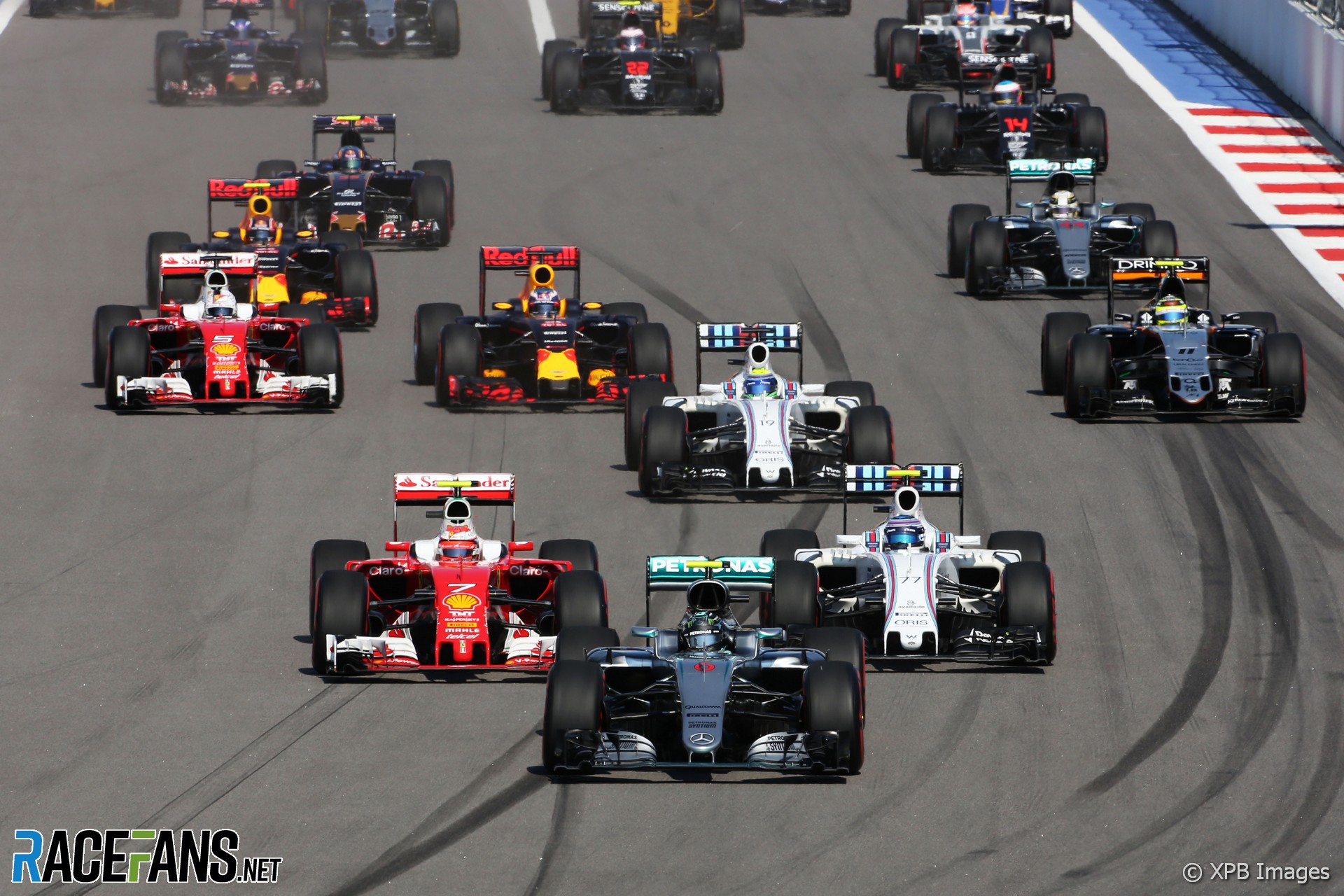 The 2016 world championship is starting to look like groundhog season. Nico Rosberg won the opening race while his closest rivals ran into trouble – and much the same has happened in each of the following grands prix.

In Russia those rivals were ticked off as follows: a power unit problem in qualifying meant Lewis Hamilton was compromised before the race even began, Sebastian Vettel was out shortly after it did and Kimi Raikkonen was too busy fighting a Williams to pose a significant threat.

Rosberg therefore completed a clean sweep of the opening four ‘flyaway’ races. He heads back to Europe with a perfect 100 points in his pocked: and surely his best chance yet of claiming the title.

A lot has been written recently about Hamilton’s luck. And there’s no question he’s been short of it recently: power unit faults in consecutive qualifying sessions virtually guaranteed Rosberg would take the lion’s share of points at these two rounds.

There are degrees of luck, however. Had Hamilton’s car broken down during the races instead of in qualifying he would have amassed zero points in China and Russia instead of a combined 21. And in Russia he had the good fortune to once again not make a very quick start.

There was a long wait for the lights to go out as the race began, and when the field was released Hamilton came under attack from the fresher-tyres cars behind him while those on the rows ahead drew away. That gave him space to join the racing line approaching the first braking point at turn two.

This was the third grand prix at Sochi, but the corner already has a reputation as a trouble spot. “It’s sort of like Monza in a way,” Daniel Ricciardo explained. “You come from a high speed and it’s really tight so incidents are more likely to happen compared to maybe Shanghai where you roll in with a lot more speed to turn one.”

Ricciardo was one of several victims when his team mate Daniil Kvyat, left his braking too late and clattered into Sebastian Vettel. The Ferrari driver slewed sideways into Daniel Ricciardo who in turn clipped Sergio Perez.

Bearing down on the scene Hamilton quickly opted to take to the run-off area. He’d done so in qualifying 24 hours earlier and been rapped on the knuckles for not obeying the correct route back onto the track. This time he went around the polystyrene block as instructed, and as he rejoined the track Vettel and Kvyat were sweeping by.

Vettel, however, slowed – possible due to a left-rear puncture – and Kvyat piled into the back of him once more. This time he bundled the Ferrari off into a barrier. The reckless driving Vettel had unjustly accused Kvyat of in China the Red Bull driver had committed twice in the space of as many corners in Russia.

“What Kvyat did was completely unnecessary,” said Vettel. “I had a massive hit from behind, then another big hit in turn three and that finished my race.”

Hamilton regained his momentum and got to turn four ahead of Max Verstappen, who had narrowly avoided being launched by Kvyat in turn three, and Sergio Perez, who had a puncture from his contact with Ricciardo.

Hamilton goes on the attack

There was more chaos further back. Esteban Gutierrez also arrived at turn two too quickly. “I arrived at the first corner with a lot of space in front,” he explained, “and I braked but, unfortunately, I couldn’t stop the car”. He took out two drivers – Nico Hulkenberg (for the second year in a row on the first lap in Russia) and Rio Haryanto.

The Virtual Safety Car was deployed initially, followed its real-world equivalent. Gutierrez made for the pits with the two Red Bulls and Perez for company.

At the other end of the field Rosberg led ahead of Raikkonen, who had passed Valtteri Bottas at the start, the second Williams of Felipe Massa and Hamilton, whose turn one excursion had worked out well for him. Next came Verstappen followed by Fernando Alonso, one of three drivers to have made up seven places at the start thanks to the chaos. The others were the two Renault drivers, Kevin Magnussen in ninth ahead of team mate Jolyon Palmer and behind Romain Grosjean’s Haas.

After three laps under caution the race resumed. Bottas and Hamilton nailed the restart, each lining up Raikkonen and Massa respectively for carbon copy moves down the inside of turn two. Bottas couldn’t give the Ferrari the slip, however, and with Hamilton bearing down on them this soon became a tight, three-way scrap for second.

With Rosberg disappearing into the distance Hamilton was in no mood to wait. On lap seven Raikkonen closed on Bottas at turn four but, perhaps remembering his indiscretion last year, thought better of a move. He understeered wide and Hamilton pounced, diving past the Ferrari into turn five.

Although Hamilton couldn’t make a pass stick on Bottas at this early phase, the expected single pit stop was always likely to play into his hands. Williams had a chance to keep Bottas ahead of Raikkonen, but the presence of Hamilton complicated matters.

Bottas was the first of the three to pit, on lap 16. Hamilton followed the next time by as he rejoined the track the Williams driver beat him to turn two. Sensing a battle was developing Ferrari wisely left Raikkonen out.

Sure enough Hamilton launched an attack on Bottas two laps later, and as the Williams driver fought to hold on to his position he ran wide on the turn three marbles. That lap cost him two seconds to Raikkonen, and more time lost passing Alonso handed the initiative to Ferrari. Even though Raikkonen stuttered away from his pit box he was easily up into third place.

That ended the prospects of a sequel to Bottas and Raikkonen’s 2015 scrap, one which would have been a close battle as the Williams was clearly not as quick on the soft compound tyres they used in the second half of the race.

Having passed Bottas, Hamilton made little inroads into Rosberg’s lead to begin with. Between laps 22 and 30 the gap between the pair shrunk slowly by just 0.7 seconds to 12.2. Suddenly Rosberg’s lap times rose and it seemed the chase was on: by lap 36 his lead was down to seven-and-a-half seconds.

“There wasn’t a doubt in my mind that I could win it,” said Hamilton. “I had the pace but then I problem with the engine again, so I had to back off.” Race engineer Peter Bonnington came on the radio to warn him about his water pressure.

Hamilton didn’t know how serious the problem was and didn’t know if his engine would last until the end. He duly backed off by around a second per lap. “I wasn’t at full throttle down the straights, just trying to look after it,” he said.

Meanwhile Rosberg punched in his quickest lap of the grand prix so far: 1’39.616. Race over.

Following the hectic start, the rest of the race was more orderly than those seen previously. Unlike the previous three rounds Pirelli had not brought a softer compound of tyre compared to that used the season before, there having been no time to test the new ultra soft compound before teams made their selections. Drivers converged on single-stop strategies.

Red Bull tried to make virtue out of necessity by putting both their drivers on mediums when they came in at the end of lap one. Kvyat’s pace on them was good enough for him to run to the end, but a ten-second stop-go penalty for the first lap crash meant he never figured. Ricciardo, carrying sidepod and floor damage which would have cost him downforce, couldn’t get the harder tyres to perform as well and had to make a second stop for softs.

Russia was a point-less exercise for the entire Red Bull family, as Verstappen’s 2015 Ferrari power unit gave up while he was running sixth. Team mate Carlos Sainz Jnr had to make an early pit stop to have a piece of front wing removed from his sidepod, was penalised ten seconds for pushing Jolyon Palmer off the track, and was relegated from the points by Jenson Button four laps from home.

That meant both McLarens finished in the points, Alonso taking sixth with an eight-second lead over Magnussen. The Renault driver had superbly passed Ricciardo on lap 29, working the outside line at turn two, then lunging up the inside of turn four. He finished a superb drive with Grosjean and Perez filling his mirrors – the latter having recovered well following his puncture.

Palmer lost 12th place to Ricciardo in the final laps and had Marcus Ericsson bearing down on him at the end. The other Sauber chased Kvyat to the flag, Nasr having been delayed by an early pit stop due to a puncture. He also picked up a penalty for cutting turn two when Pascal Wehrlein attempted a daring pass on him. The Manor driver finished well down after his tyres went off, forcing an extra pit stop.

Rosberg is more than smart enough to know he’s had fortune on his side so far this year. And he wasn’t exempt from the problems Mercedes experienced in Russia: he had to manage an MGU-K fault mid-race.

“Reliability is becoming a bit of a concern, as Lewis obviously has a problem yesterday and both cars had issues during the race today.” he admitted after the race. “But we have a great team behind us and I’m fully confident that we will sort this out.”

Last time F1 visited Russia one of those problems practically ended Rosberg’s title hopes. The way the cards have fallen so far this year, they have given him an enviable head start.