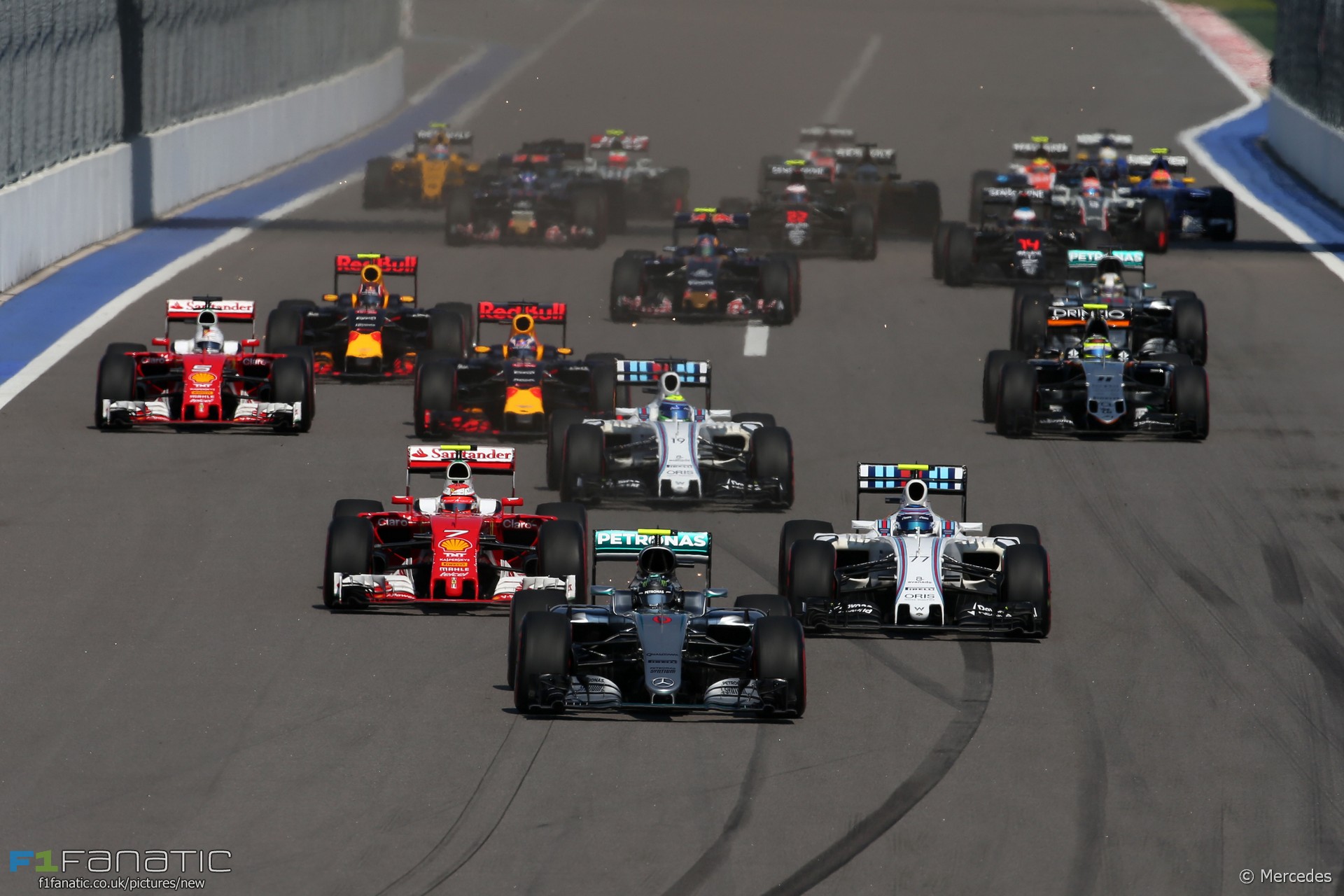 Lewis Hamilton – Despite a few spins on Friday – shades of Shanghai – Hamilton headed the times at the end of the day. He was in the hunt for pole position until a power unit problem struck him down – he also picked up his second reprimand of the year in the same session. Made a slightly slow getaway but avoided the turn two chaos, profiting to the tune of five places. Passes on Raikkonen and the Williams drivers moved him up to second, but a water pressure problem kept him from chasing down Rosberg.

Nico Rosberg – Quickest in the morning running on Friday, Rosberg didn’t manage to get a quick lap together on super softs in the afternoon. But in Q2 he produced stunning pace and looked capable of giving Hamilton a run for his money until his team mate’s misfortune gifted him pole position. The biggest threat to his race victory came from an MGU-K problem which he managed en route to his fourth win of the year.

Sebastian Vettel – Arrived in Sochi knowing he would take a five-place grid drop for a gearbox change. By the time it was announced he’d suffered another setback – electrical problems in second practice keeping him from doing a race stint simulation. Nonetheless he qualified second, which was clearly the best the car was capable of. Starting seventh put him in the firing line from Kvyat, however, who dumped him into the barriers after two hits in as many corners.

Kimi Raikkonen – Said he didn’t “do any proper laps” on Friday as he grappled with the low-grip track. He was struggling most in the final sector, and an error there cost him a front row place to Bottas. He took second from the Williams driver at the start but lost it at the restart, and Hamilton relegated him another place. However he jumped ahead of Bottas for good in the pits and claimed his second podium finish of the year.

Felipe Massa – Was only a tenth of a second off Bottas on Friday and stayed within range of his team mate in qualifying. He wasn’t as quick in the early phase of the race on super-softs, and a late charge after a free pit stop didn’t help him progress.

Valtteri Bottas – At a track which suited the Williams and its Mercedes engine, and where Bottas has been strong in the past, he delivered, splitting the Ferraris in qualifying to claim a place on the front row of the grid. Having dropped behind Raikkonen at the start he reclaimed the position with a rapid restart. However he lost time battling Hamilton after his first pit stop and was jumped by the Ferrari again, dropping to fourth.

Daniel Ricciardo – Tested the Aeroscreen on Friday morning then got on with a typical programme, ending up within three tenths of a second of Raikkonen’s Ferrari. Red Bull didn’t appear to have the one-lap pace to beat Williams and Ricciardo duly lined up behind both of them. Contact from Vettel by way of Kvyat at the start left him with a badly damaged floor. A gamble on medium tyres didn’t work out ad he finished 12th after a second pit stop.

Daniil Kvyat – On good form at his home track, he ended Friday only a tenth of a second off Ricciardo. Qualifying was a close run thing – he only just made it out of Q2. He didn’t have time to do a warm-up lap in Q3, so ending up three-tenths off Ricciardo was reasonable. The race was a disaster, however – two major errors within seconds of the start ruined several drivers’ races, including Red Bull stablemates Ricciardo and Sainz.

Nico Hulkenberg – Missed first practice as Alfonso Celis drove his car, but still ended up the quicker of Force India’s drivers on the day. However he was missing some pace on Saturday, failing to accompany Perez into Q3. He was then rammed by Gutierrez at the start and retired.

Sergio Perez – Another driver who tends to go well at Sochi, a solid qualifying performance from Perez plus Vettel’s misfortune yielded Force India’s highest starting position of the season so far. However he incurred a puncture at the start and had to limp back to the pits. He rose back through the field to claim points for ninth but spent his final stint stuck behind Grosjean and Magnussen.

Kevin Magnussen – Didn’t run in first practice as Sergey Sirotkin drove his car, but looked the more comfortable of the two Renault drivers from the off. Couldn’t make the cut for Q2 but profited from the turn two incidents to run ninth. He gained another place by pitting before Grosjean and using the benefit of the undercut, and kept the Haas driver ahead to the end for a solid seventh place.

Jolyon Palmer – Still unhappy with the balance of his car after China, Palmer was pessimistic about his prospects for the weekend on Friday. He turned it around on Saturday after changes to his floor, and was just a tenth of a second off Magnussen in qualifying. He stayed in touch with Magnussen in the first stint but pitted earlier, and his pace dropped off sooner on the soft tyres. He dropped behind Ricciardo and finished six places behind his team mate.

Max Verstappen – There was just hundredths of a second between the Toro Rosso drivers on Friday. Verstappen was vexed by too much oversteer but pipped Sainz into Q3 and qualified ninth. Having narrowly avoided the Vettel/Kvyat fracas Verstappen was well-placed in sixth until a power unit problem halted his run.

Carlos Sainz Jnr – Had a straightforward day on Friday, missed the cut for Q3 by four-hundredths of a second on Saturday, but that gave him a free tyre choice for Sunday. He got off the line well but collected Kvyat’s front wing at turn two which forced him to pit early to have it removed. His tyres began to fade at the end of a long second stint, which allowed Button past, and a ten-second penalty for forcing Palmer wide left him 12th.

Marcus Ericsson – Ran through a range of set-up tweaks as he searched for a balance on Friday but ended up almost a second off his team mate. It got no better on Saturday, where he qualified last. Felt his car was better on high fuel but despite a trouble-free race he finished well outside of the points.

Felipe Nasr – With a new chassis underneath him Nasr immediately looked more at home and bat Ericsson by half a second in qualifying. However a puncture during the first stint spoiled his run and a five-second penalty for failing to obey the turn two run-off area rules while battling Wehrlein was unnecessary.

Fernando Alonso – Cautious about McLaren’s prospects after a solid Friday, Alonso wasn’t quite on Button’s pace in qualifying and lined up 14th. However he made great gains from the lap one confusion and emerged in seventh place. The car had the pace to stay there as well, and instead of being consumed by rivals on the straight Alonso finished a place higher up after Verstappen dropped out. He entertained himself with a few ‘push’ laps at the end, recording the fifth-quickest time.

Jenson Button – Eighth on Friday, Button reckoned Q3 was possible for the team, and although he didn’t make it he was within a tenth of a second at a track which wasn’t ideal for the car. He didn’t get away well and was immediately passed by Alonso, falling to 15th. From there he climbed into the points, passing Sainz for the final place in the top ten.

Pascal Wehrlein – Lost some time having his floor replaced on Friday, and had a quick spin on the slippery track as well, which was by no means unusual for any of the drivers. Pipped Haryanto in qualifying, but after a feisty scrap with Nasr in the race his tyres went off and a second pit stop meant a wasted race.

Rio Haryanto – Also had to play catch-up after losing time with a steering rack change on the first day. At turn one he was hit by Hulkenberg’s out-of-control Force India, forcing him out.

Romain Grosjean – Felt there was still something wrong with his car after his problems in China. Despite struggling to get the tyres working on the smooth track he made it into Q2, and at the start he dived for the escape road and emerged in a strong eighth. He lost a place to Magnussen in the pits which he couldn’t regain on the track, but added more points with ninth place.

Esteban Gutierrez – Had similar tyre problems to Grosjean but also made it into Q2, albeit last. At the start he braked too late and took out Hulkenberg and Haryanto, earning a penalty and two points on his licence. He at least saw the chequered flag, albeit a distant 17th.