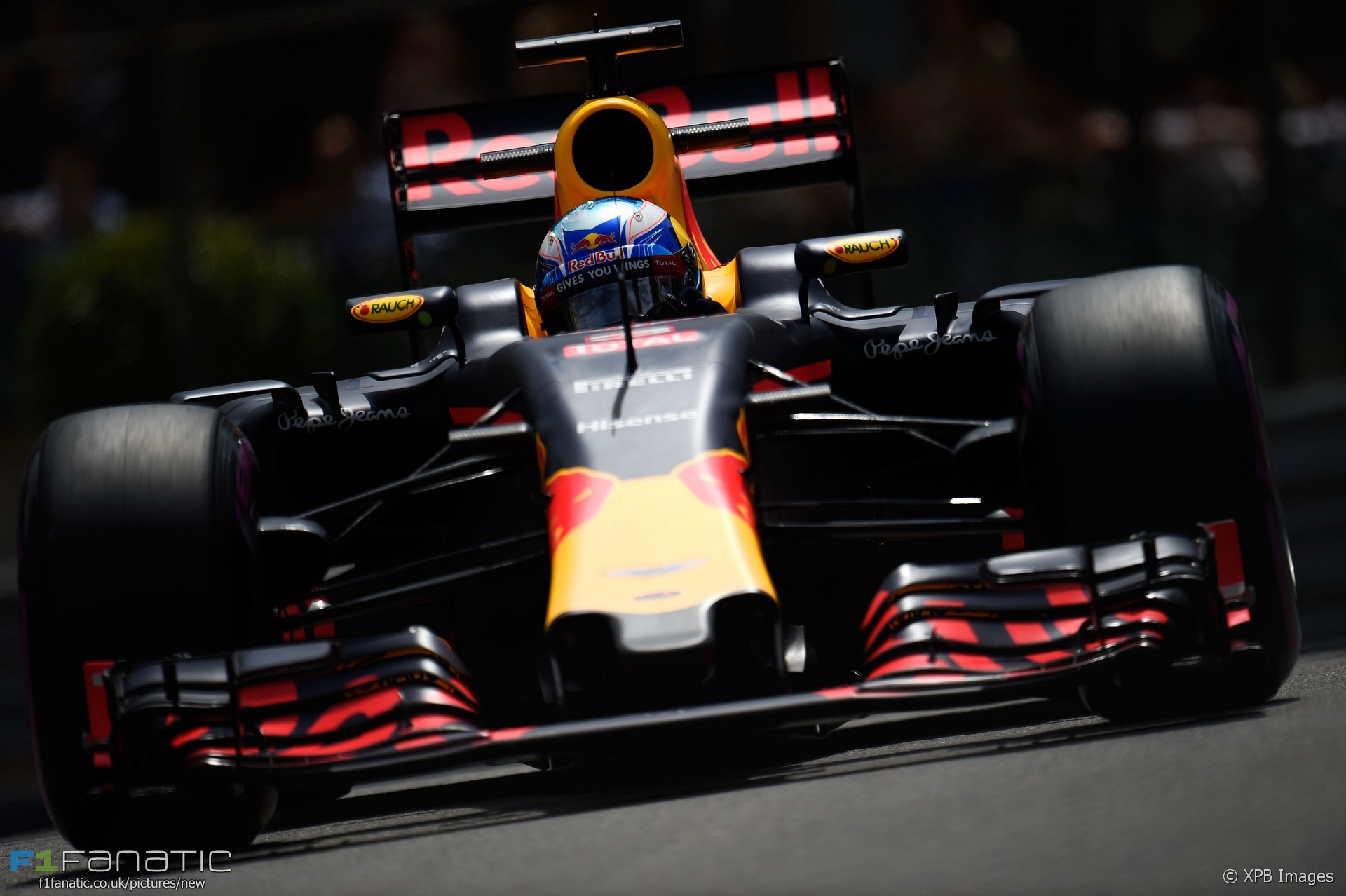 Daniel Ricciardo kept his hopes in check after heading the second practice session for the Monaco Grand Prix by over six tenths of a second, acknowledging that Mercedes usually keep something in reserve.

“Come qualifying and race day Mercedes will turn it up but hopefully I can stay in front,” he said. “I’ll be surprised if we can keep the gap we have today in qualifying but we will see how we go.”

A look at what happened to the teams’ times from one session to the next on Thursday underlines Ricciardo’s need for caution. While he improved his lap time by 1.7 seconds the Mercedes pair, who also used ultra-soft tyres in both sessions, found no more than 0.3s.

The Mercedes drivers didn’t get especially clean runs on the new purple-coloured tyres, which explains Ricciardo’s doubt he’ll be able to maintain his advantage on Saturday. Moreover the silver team potentially has more to find from a tyre they didn’t use during testing.

However there is genuine cause for encouragement at Red Bull. Last year they were two seconds behind Mercedes at the Circuit de Catalunya and one second off in Monaco. Two weeks ago Ricciardo qualified 0.68s off the Mercedes in Barcelona. Thursday’s practice times are a further indication Ricciardo can be a credible threat to the W07s on Saturday.

Ricciardo’s qualifying form this year has been hard to fault. In China it was he, not either of the Ferraris, who grabbed the opportunity to join Nico Rosberg on the front row. In Spain he let Max Verstappen enjoy the limelight in Q1 and Q2 – then put his new team mate firmly in his place with a stunning single run in Q3.

On Thursday he flew around Monte-Carlo’s narrow confines. It’s a track Ricciardo has always been strong on: during his Formula Renault 3.5 career he won both times he raced in Monaco. His near-one second advantage over his team mate was clearly not entirely down to his upgraded new engine.

And while Mercedes can be expected to produce more from their engine during qualifying, it won’t count for as much at a track where drivers are at only full throttle for around a third of a lap. It may even be the case that Renault’s new power unit, which is understood to be a step closer to Mercedes’ architecture in some respects, is capable of something similar.

Qualifying on pole position is more than half the battle when it comes to winning the Monaco Grand Prix. And it looks like for once there is more than just the two Mercedes in that fight.

28 comments on “Why Ricciardo is a credible threat to Mercedes”