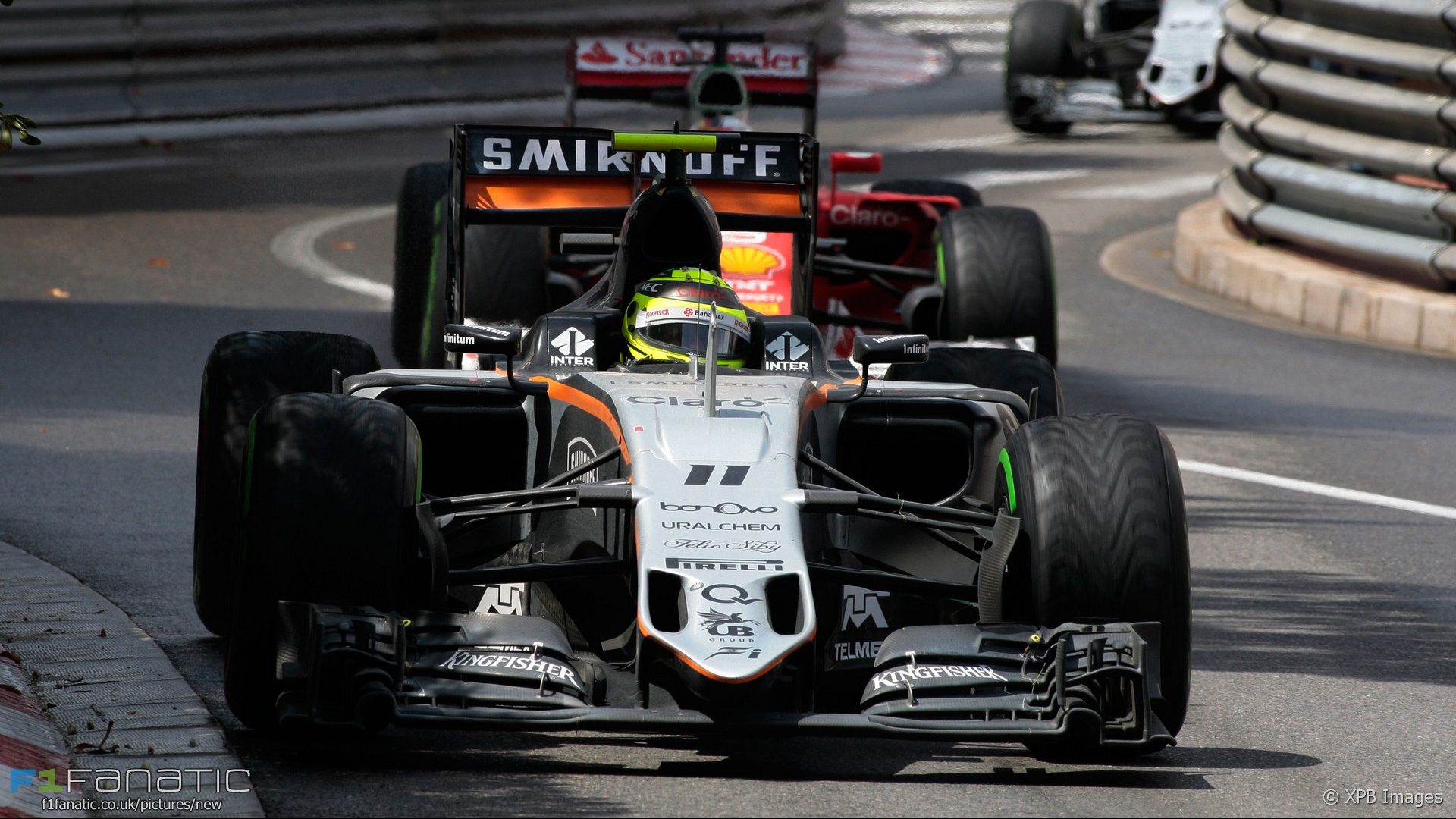 Which teams’ drivers got full marks for their performance in the Monaco Grand Prix? Here are the ratings for every driver.

Lewis Hamilton – “My final attempt was what should have been my banker lap,” said Hamilton after missing his first run in Q3 due to a fuel pressure problem and qualifying behind Rosberg. He was clearly furious after his third technical problem during qualifying in the last four races. When Rosberg waved him by on lap 15 he was 14 seconds behind Ricciardo, a deficit he trimmed by just over a second in the course of the next six laps. What really brought him back into contention was staying off the intermediate tyres, saving a visit to the pits, which put him in position to benefit from Ricciardo’s slow stop and take the win.

Nico Rosberg – Also had a fuel pressure problem during qualifying but was held in the pits and managed to get two runs in. That allowed to to grab second on the grid behind Ricciardo, but as the Red Bull disappeared up the road it was clear Rosberg was holding Hamilton up. Rosberg was at a loss to explain his lack of speed – “possibly a brake issue” – but said he had no qualms with the “simple decision” to let Hamilton by, in spite of the damage it did to his points lead. He slipped behind Alonso in the pits and was mugged by Hulkenberg in the last-lap drizzle. He took the flag a minute and a half behind his team mate and never looked like someone who had won this race three times before.

Sebastian Vettel – Ferrari’s mystery loss of grip in qualifying continues to plague them. Vettel was specially unhappy having run strongly in final practice. In the race he made a bold early move off wet weather tyres but his reward was to be stuck behind Massa’s slow Williams. That ended his podium hopes, but while he blamed himself for being unable to find a way past he was trying to do the near-impossible.

Kimi Raikkonen – There’s nowhere worse to have a gearbox change penalty than Monaco so it was tough for Raikkonen to have to start 11th having been within two-tenths of Vettel. However his departure from the race was entirely his own fault and he was fortunate not to be penalised after dragging his battered Ferrari through the tunnel with its front wing hanging off.

Felipe Massa – His Thursday crash was a rookie mistake. After being shaded by Bottas in qualifying, Massa took advantage of his team mate getting stuck behind Wehrlein to move ahead and ran a long stint at the end to nab the final point.

Valtteri Bottas – Neither Williams driver made it into Q3, but a top ten start and Kvyat’s early problem made points a possibility for Bottas. However an early stop for intermediates dropped him behind Wehrlein, and by cutting the chicane as he passed the Manor Bottas left himself needing to let Wehrlein through along with Verstappen, who had just made a pass of his own. By the time the Manor had pitted Bottas had lost three places, and though a last-lap pass on Gutierrez restored him to 11th he was given a ten-second penalty for tangling with the Haas driver and moved back down the order.

Daniel Ricciardo – Signalled Red Bull’s potential on Thursday, demonstrated it on Saturday with the first pole position of his career, and led masterfully in the wet conditions on Sunday. But for the second race in a row a win got away from him and the blame lay back in the pits – this time with his crew who failed to get his tyres out on time for his final pit stop. On his in-lap Ricciardo had been over two seconds quicker than Hamilton in the middle sector so this was a clear victory opportunity blown.

Max Verstappen – Arrived in Monaco making all the right noises about staying out of the barriers but didn’t come good on that aim. By the chequered flag he’d made three trips to the wall, one of which condemned him to dropping out of the running in Q1 and another putting him out of the race. Prior to that he’d made some great passes and was flying after his switch to intermediates. But his Red Bull career now reads: one excellent weekend, one miserable one.

Nico Hulkenberg – Qualified an excellent fifth, pipping Raikkonen by six-thousandths of a second and beating both Toro Rossos. But like Vettel he fell into the ‘Massa trap’ during the first stint and the time lost allowed Perez to get ahead. He showed tremendous opportunism on the final lap, however, demoting Rosberg for sixth place. Even so it’s hard to disagree with his assessment that the race was a “a huge missed opportunity” and the early pit stop “ruined my race”.

Sergio Perez – Backed up Hulkenberg’s qualifying effort with a time less than two-tenths slower than his team mate’s. His race strategy was pin-sharp, jumping ahead of Vettel and Hulkenberg at the first round of stops and getting on to slick tyres a lap before most of the front runners to get into a podium position. He duly delivered an excellent third place for the team.

Kevin Magnussen – The winner of the Jean Alesi award for being the first driver to get rid of the wet weather tyres: Magnussen was in as soon as the Safety Car period ended. He clipped the barrier at Tabac which the lapped Kvyat took as an invitation to launch down the inside at Rascasse, causing contact. Magnussen hit the barriers again later and retired in the pits.

Jolyon Palmer – Tabac, Swimming Pool, Sainte-Devote: The three scenes of Palmer’s crashes during a bruising first weekend as an F1 driver in Monaco. His pace was not too bad, giving away three-tenths of a second to Magnussen in Q1. His race-ending crash began when he spun his wheels in fifth gear while going over a pedestrian crossing in front of the pits.

Daniil Kvyat – Was disappointed with his Q3 run which was almost half a second off his time from Q2 and a similar margin down on his team mate’s effort. An electrical problem dropped him off the lead lap but he got too ambitious trying to un-lap himself from Magnussen, earning himself a grid penalty for the next race.

Carlos Sainz Jnr – Got his Toro Rosso onto the third row of the grid and brought it home eighth but said he was disappointed to have lost places at both his pit stops. Sainz was among the last to switch to intermediates and was back in for wets just ten laps later. Described racing around Monaco in the wet as “the most difficult thing I’ve done in my life” but copes with it better than most.

Marcus Ericsson – Missed the cut for Q2 by a mere four-hundredths of a second. In the race he made an early change to slick tyres and struggled for pace at first which allowed Nasr ahead of him. Nasr appeared to go through the same phase and was quickly caught by Ericsson. The team ordered Nasr to let Ericsson past but he refused. Ericsson then took matters into his own hands but a clumsy passing attempt at Rascasse put both Saubers out.

Felipe Nasr – Having been unable to set a time in qualifying due to an engine failure, Nasr got onto his team mate’s tail during the second stint and moved ahead by waiting longer to switch to slick tyres. The pair were running close together but closing on Wehrlein and Grosjean, which explains Nasr’s unwillingness to let his team mate past. He was then turfed off at Rascasse by Ericsson.

Fernando Alonso – Snuck his McLaren into Q3 but didn’t follow his team mate’s early switch to intermediate tyres in the race, the result being he maintained position through the first round of stops. The second pit stop played into his hands beautifully as it jumped him in front of Rosberg an Hulkenberg. He weather pressure from the Mercedes driver for the rest of the race and saw him off, holding on for an excellent fifth.

Jenson Button – Two-tenths down on Alonso in Q2, Button started 13th. Despite struggling with constant rear locking he made a typically gutsy early switch to intermediates but was thwarted by Wehrlein running long on wets. He made the switch to slicks early as well and that lifted him ahead of Gutierrez and up to ninth at the flag.

Pascal Wehrlein – The only driver besides Hamilton to avoid running on intermediates, Wehrlein played himself into a potentially strong position. He was partly undone by Bottas passing him illegally off the track and holding him up which allowed Verstappen by. However more of the damage was self-inflicted, with ten-second penalties for speeding during a Virtual Safety Car period and failing to obey blue flags.

Rio Haryanto – Used his Monaco experience to beat Wehrlein in qualifying but after an early switch to intermediates it took him a while to start lapping quicker than his team mate who stayed on wets. Wehrlein generally showed better pace in the race but Haryanto stayed out of trouble.

Romain Grosjean – Was beaten in qualifying by Gutierrez for the first time and blamed the Mercedes for holding him up in qualifying while he was trying to get heat into his tyres. His race was ruined when Raikkonen, who had just hit the barrier at the Fairmont hairpin, pushed him wide. That left him stuck behind Wehrlein, though the Manor driver’s penalties meant Grosjean was classified ahead.

Esteban Gutierrez – Achieved his best starting position of the year so far with 12th but wasn’t able to use that as a springboard to a points finish. The timings of both his pit stops were on the conservative side which put him at a disadvantage, and he was passed on-track by both Williams drivers.

Who was your top driver during the Monaco Grand Prix weekend? Cast your vote here: