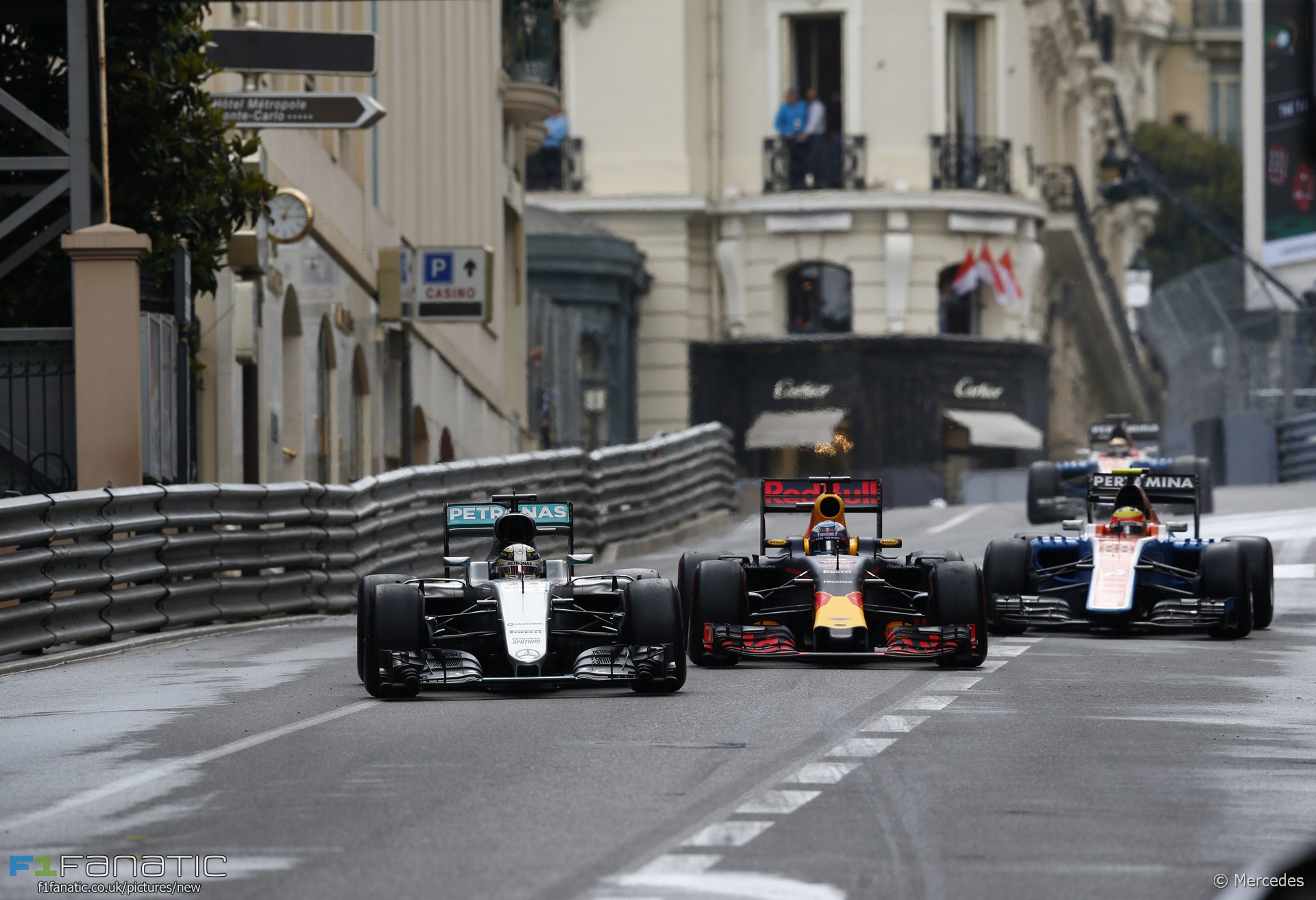 The Monaco Grand Prix is a stern challenge of driving abilities in ideal conditions – and rain cranks the difficulty up even higher for all involved.

Small wonder than that Sunday’s race saw the highest rating for a Monaco Grand Prix since the last time the race was held on a wet track in 2008.

Despite earning a strong average score of 7.7 out of ten from F1 Fanatic readers, the most recent round of the championship only ranked fourth of the six races so far, a sign we’ve enjoyed an absorbing start to the 2016 season.

Here’s what you thought of the Monaco Grand Prix:

Can’t beat a drying track at Monaco. Great driving and tactical skills on display, as well as some pretty dumb ones. What’s the point making a smart tyre choice in qualifying if you then make the choice of no tyres in the race?!

All part of a great day’s racing, along with the amazing finishes at Indianapolis and the Nurburgring.

I really like the Virtual Safety Car – it gets the race back on quickly, avoids the fake closing-up of the field (which admittedly plays a big part in the Indy 500) and there’s none of that tedious unlapping rubbish that goes on behind the safety car.
@Bullfrog

The rainy part was awesome, there was constant suspense all the way to the end, even when it was ‘dry’. I never quite knew who would finish where, whether each driver’s tyres would last, whether it might rain again, whether someone would make a silly error and one of those little lock-ups would become a proper shunt. Then we had six different cars finishing in the top six positions, with supposedly slower cars more than matching the quicker ones.
Neil (@Neilosjames)

Really good race for Monaco standards (and the fact that they were driving in Monaco is an inherent plus). Unfortunately, the last 25 laps or so weren’t quite so entertaining, apart from the clash of the Saubers and some aspects of the final lap.

Once it became clear that tyre wear wasn’t going to be a factor (except for Rosberg on the final lap; when it rains, it pours), and that Ricciardo’s only chance of attacking Hamilton was a prolonged neutralisation of the race, it felt like the race result was set in stone.
Nase

Nase wasn’t the only one who found it a ‘race of two halves’:

Very entertaining first half of the race with many on-track and pit-stop action along with different approaches what to do. However it all become quiet in the second half so it’s a shame that rain hadn’t fallen a few minutes earlier.
Michal (@Michal2009b)

The unique challenge of Monaco isn’t appreciated by everyone, however. The demanding narrow confines which makes the track so hard to drive also inhibits overtaking.

I hate the track, because overtaking is way too hard and it will get worse next year with the wider cars. It was entertaining but for me Monaco GP remains a show-run.
@Tmf42

Why do we need overtaking all the time? Doesn’t it make the successful passes at Monaco more memorable when they occur?

It’s just a unique race that gives a real sense of speed… not every one needs to have loads of ‘overtakes’. No one mentioned DRS the whole weekend, which was an absolute blessing.
@John-h

Others felt there was just too much crashing for an F1 race.

This is supposed to be the pinnacle of motor racing, not demolition derby. Monaco just isn’t fit for purpose in the modern F1 era, and races like today give Bernie Ecclestone more ideas about sprinklers.
@Gregkingston

For the ‘jewel’ race of F1 this was amateur hour. Safety Car start ruined the excitement of a wet Monaco, Red Bull threw Ricciardo’s race away with one of the worst pit stops I’ve ever seen, massive disappointment from the ultra soft, Kvyat Kvyatting, the Saubers making fools of themselves, Rosberg forgetting where the finishing line is, and just all around general sloppiness from everyone involved.

A few bright spots (Alonso), but ultimately an average race in terms of action made worse by the laughable mess of errors.
@Ogopogo

Unusually for Monaco we even saw changes of position at the front of the field. But it came in unusual circumstances:

An entertaining and intriguing race. Disappointed for Ricciardo losing out on a silly pit error (Hamilton must have had a lot of trouble switching on those ultra-softs to only just pip him on pit exit) but Hamilton drove a good race once he was let past Rosberg (something I’m surprised they did, seeing as they tend not to use team orders).

What Rosberg was up to was confusing. He’s never been that good in the wet, but he also never found any pace to hassle anyone when the track dried and slipped backwards in the pit stops. Perez put in a great drive to quietly claim third, Vettel stayed out of trouble but didn’t achieve anything while Alonso did well to get fifth.
Craig Wilde (@Wildfire15)

If you’ve ever considered attending the race in person, Mark G encourages you to:

We stayed in Nice relatively inexpensively and got the train to Monaco. I was a bit apprehensive at first having never been to France as an adult but the whole experience couldn’t have gone any more smoothly!

The atmosphere in Monaco is incredible. We walked the pits on Friday, grabbed a drink then walked the track. You’ll love it as a fan!
Mark G (@Sparkyamg)

Finally a warm welcome to new reader @Pinakghosh who gave a comprehensive verdict on the outcome:

What I liked:
1. Monaco gives the feeling of a race where cars are supposed to be running around in queue. But that is not often the case. Even if there is less overtaking, one can never discount the quality of races this venue produces. The changing weather brought the element of uncertainty and gave a memorable race.
2. Lewis Hamilton is back. He has cut down massively on the championship lead and it is game on. I liked the way he drove this race, the way he extended the full wet weather tyres, before putting on the ultra-soft and then taking the tyre and the car all the way to the chequered flag. It was good to see him happy at the podium. If he is happy, he will win races.
3. Daniel Ricciardo did a fantastic job, and was unlucky to finish second. He is right when he said that he drove well on all three tyres. The car was fantastic and Renault updates have come in at the right time. But Ricciardo now has to keep his head down and not get the end result last couple of races affect his performance.
4. Sergio Perez is always there when it matters. He has shown on many occasions that he had great feel for the tyres and can adapt to changing conditions as well. His team made the correct strategic call today and he backed it with a podium finish.
5. Mercedes kept their head and took a correct strategy call even when Lewis was losing massive lap times on then wet tyres. They recognised the faster driver and gave him a best possible strategy.
6. McLaren were a bit fortunate with retirements. But that does not discredit in any way Fernando Alonso drove. He kept a much faster car behind him for considerable part of the race.

What I did not like:
1. Red Bull should have been ready for Daniel Ricciardo. That’s not how a former constructors champion should act in a close race.
2. Ferrari seems lost. Come on Ferrari, you have the resources, build a proper chassis.
3. Max Verstappen has to take it easy in Monaco. That will come with experience, of course. He had the car today to show his race craft.
4. Nico Rosberg held Lewis Hamilton for several laps. This cost Lewis lots of time at the beginning part of the race. Rosberg also could not make a clean pass on the McLaren. I guess if he did let Lewis go earlier, then a perfect Red Bull pit may not have mattered.
5. Some would say Daniil Kvyat was unfortunate at the start of the race. But, he should have realized it is Monaco where one has to keep his head down and try to bring the car to end of the race. He is justifying his demotion with his driving and his attitude.
@Pinakghosh