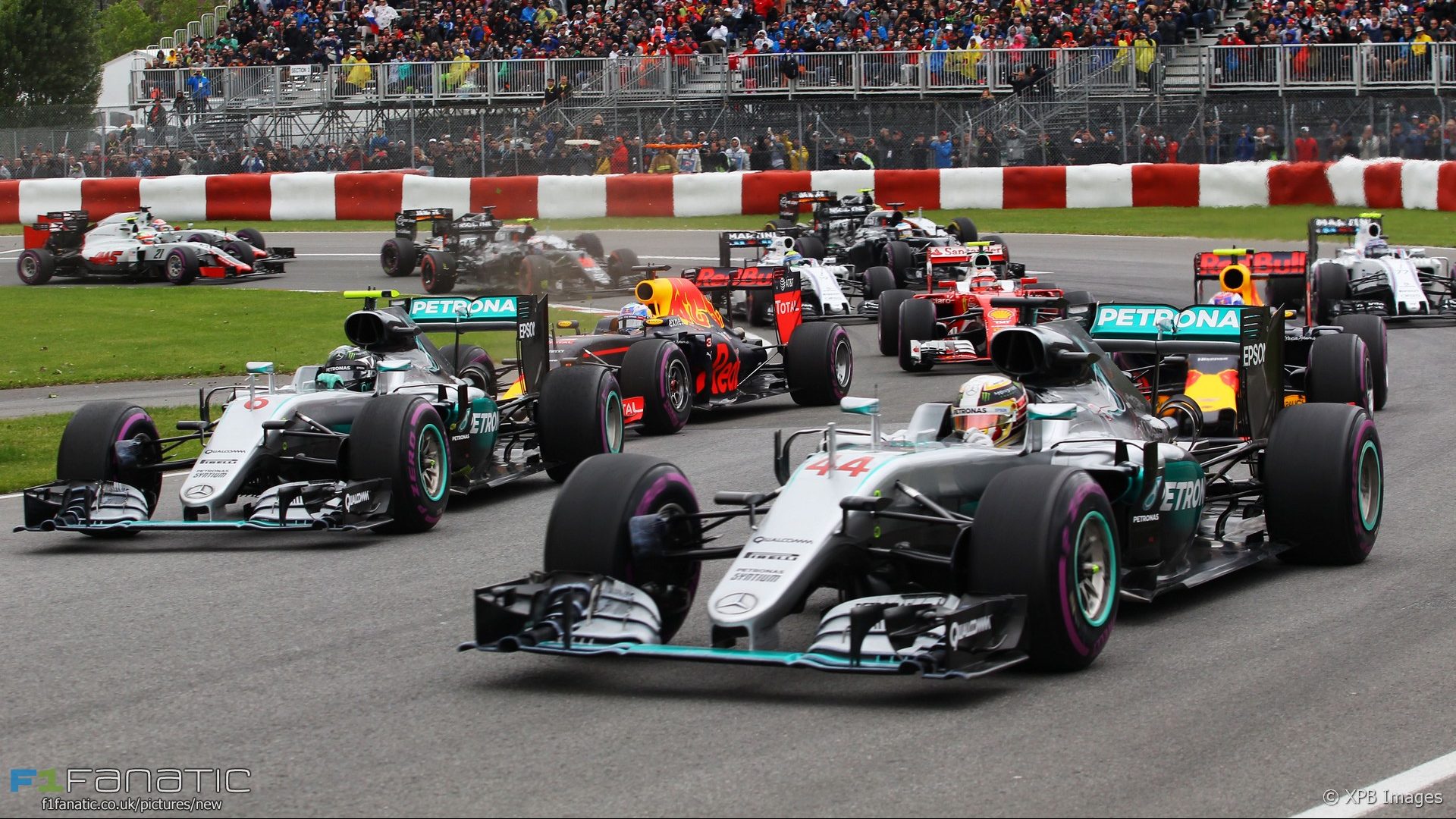 Did anyone manage a perfect weekend in Canada? Here’s F1 Fanatic’s verdict on the drivers.

Lewis Hamilton – Having been comfortably quickest on Friday Hamilton looked less assured on Saturday and admitted his fifth pole in Canada was not one of his finest laps. He made another indifferent start, losing out to Vettel, and kept Rosberg behind firmly but legally. When Ferrari let victory slip through their fingers Hamilton was perfectly placed to collect it.

Nico Rosberg – Well off Hamilton’s pace on Friday (with, curiously, a much higher top speed), but after scrutinising his team mate’s data Rosberg ran him close for most of qualifying until he got too greedy in the turn one braking zone on his final run. He left himself vulnerable to Hamilton at the start and should have expected his team mate to give him as little room as he did two years ago. After that his progress was hampered by a puncture and a penultimate-lap spin while trying to pass Verstappen.

Sebastian Vettel – Having been quickest in the disrupted Saturday morning practice session he produced a surprise with his second run in Q3, finding half a second to get within two-tenths of the Mercedes. Vettel then made a blistering start to take the lead, though he nearly lost it when he slipped up at the end of the first lap. Ferrari’s decision to pit him under the Virtual Safety Car cost him the win, and though he made a couple of further errors it had no effect on his eventual position.

Kimi Raikkonen – Spent Friday chasing a balance but couldn’t find one and was a long way off Vettel’s pace in qualifying, complaining about understeer in turn ten. In the race he continued to struggle with tyre temperature. He was further compromised by Ferrari’s pit strategy, though that didn’t account for the majority of his huge deficit to Vettel.

Felipe Massa – Crashed in the first practice session because of a fault with the DRS on a new-specification rear wing, which left him unable to run some new parts. Nonetheless he qualified close to his team mate. He slipped back from Bottas in the first stint and was given the opportunity to pit first, but he still dropped behind Rosberg. Soon after Massa’s car began to overheat, ending his race.

Valtteri Bottas – A Montreal specialist, Bottas was happy with his car from the word go and put it seventh in the grid. He had great pace at the end of his ultra-soft tyre stint and was closing on the Red Bulls, which he eventually got in front of by pulling off a one-stop strategy, something few others managed.

Daniel Ricciardo – After Friday he said he’d be content to get within half a second of Mercedes in qualifying. He managed that with another superb lap. At the start he left Verstappen plenty of room at turn one but paid the price as they came out of the second corner and found Rosberg’s car in front of them. His first pit stop dropped him behind Raikkonen, compromising his strategy, and a lock-up meant he had to make an early second pit stop.

Max Verstappen – Beaten by Ricciardo in qualifying but got ahead of him at the start. He managed his pace at first, then got a hurry-up from the Red Bull pit wall. Like his team mate he couldn’t stretch his first stint out long enough to one-stop. However his defensive driving against Rosberg in the final laps was superb and made the difference between fourth and fifth place.

Nico Hulkenberg – After a solid Friday he snatched a place in the top ten shoot-out. He dived past Rosberg on lap one but was unable to keep the Mercedes behind for the rest of the stint. However a trouble-free run in which tyre management was an ever-present preoccupation delivered points for eighth.

Sergio Perez – Took ‘new tyre pole’ after being edged out of Q3 by his team mate. He tried to make an alternative strategy work, starting on the soft tyres, but found it difficult to warm them up and ended up stuck behind the McLarens. He also got away slowly from his second pit stop and fell behind Kvyat, but passed him to take the final point.

Kevin Magnussen – Hampered by a gearbox problem on Friday then crashed heavily in Saturday practice which kept him out of qualifying. Having started last in a newly-built chassis he tangled with Nasr on the first lap. Starting on the soft tyres, Magnussen found it hard to generate heat in them and was passed by Haryanto on lap seven. However he stuck to the strategy and one-stopping moved him up to 16th.

Jolyon Palmer – Some way off Magnussen’s pace on Friday at a track where he didn’t run during practice last year, but came close to reaching Q2 as Renault’s sole representative in qualifying. He used ultra-softs at the start but also found tyre warm-up difficult and was overtaken by Ericsson. His race was ended by a water pressure problem.

Daniil Kvyat – Ran ahead of his team mate at the start of the race and used a similar strategy but never managed to get out of traffic. Described his race as “boring” after spending much of it stuck behind other cars.

Carlos Sainz Jnr – Of the two Toro Rosso drivers Sainz looked more likely to get into Q3 until he hit the wall. However from 20th on the grid he made up four places at the start and a well-timed first stop put him in contention for points. He built up enough of a gap before his final stop to make it without losing position, claiming a fine ninth.

Marcus Ericsson – Said he was “not fully satisfied” with the car after Friday practice and although he out-qualified his team mate his penalty from Monaco left him at the back of the field. Almost had the pace to get in front of Grosjean in the second half of the race but narrowly fell short.

Felipe Nasr – Like his team mate he missed some running in first practice due to technical trouble, but there was no explanation for why he ended up a second off Ericsson in qualifying. In the race he was tipped into a spin at the start but having finished the first lap six seconds behind his team mate he lost over half a minute by the chequered flag.

Fernando Alonso – Said he might be better off if he missed a place in Q3 and started 11th with a free tyre choice. However thanks to a tow from his team mate he did get a place in the top ten. He couldn’t produce the same in the race, but after a radio request for a late pit “stop” he at least entertained himself by passing Kvyat.

Jenson Button – Power unit problems in qualifying left him without the latest hardware in the race. His old unit then packed up, making this a wasted weekend.

Pascal Wehrlein – Both Manor drivers had some familiarisation to do in their first event at Montreal. But Wehrlein looked least in need of it, particularly after a brilliant first run in Q1 which put him in contention for a Q2 place, which he eventually missed by just 0.15s. He held onto his place at the start but floor damage compromised his car’s performance and he lost a place to Ericsson. However he beat the delayed Nasr to the flag.

Rio Haryanto – Much more ragged than his team mate during qualifying and eventually crashed at turn four. In the race he finished almost three-quarters of a minute behind but a slow pit stop and endless blue flags explained part of the deficit.

Romain Grosjean – Continues to be puzzled by the problems Haas are having with their tyres and lined up behind his team mate for the second race running. He went off at one point during the race and suffered another broken front wing on his way to 14th.

Esteban Gutierrez – Did a solid job in qualifying to take 13th on the grid which was where he finished after an uneventful race.

Vote for your Canadian Grand Prix Driver of the Weekend

Name your top driver of the weekend here: