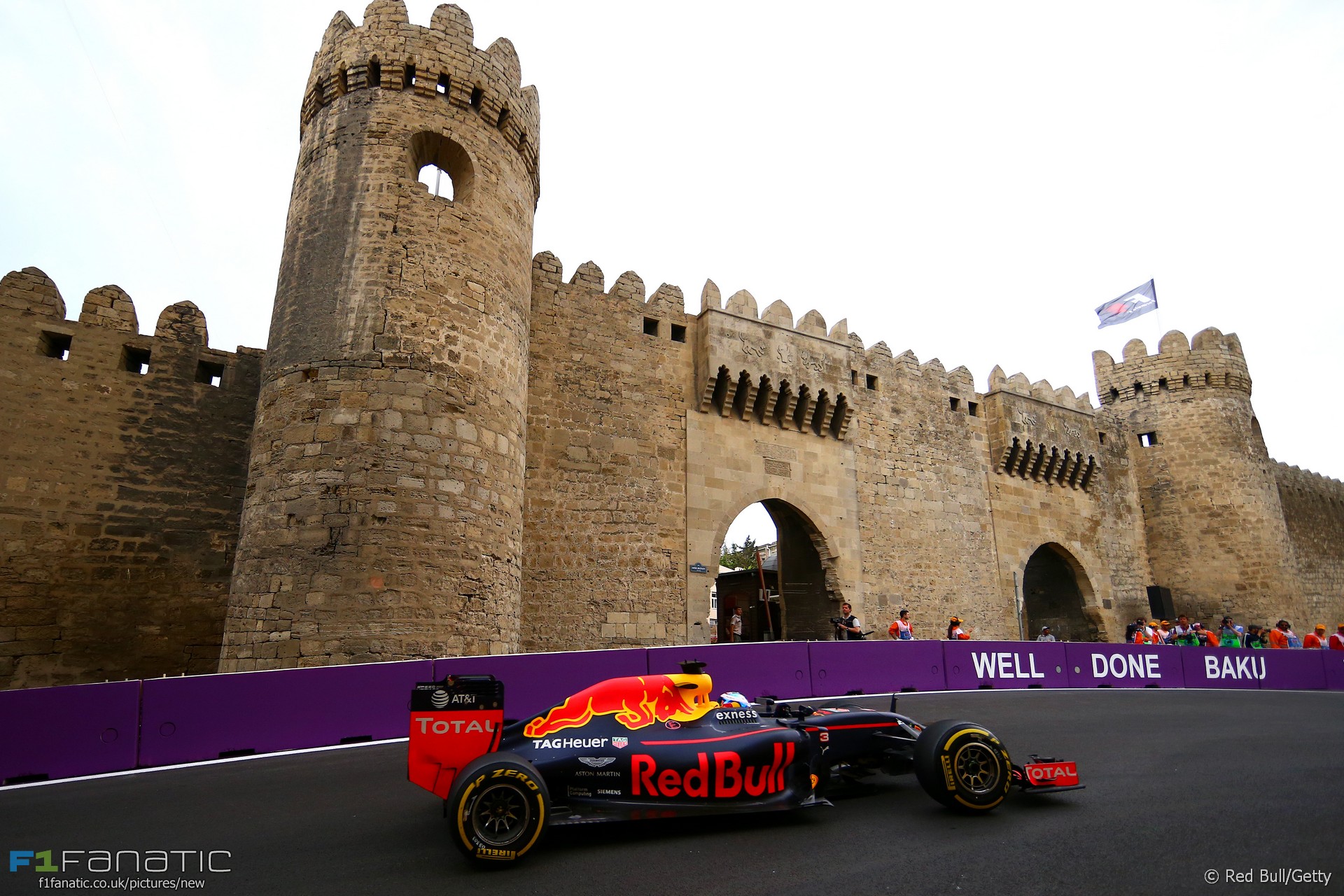 Formula One’s first day of action at the Baku City Circuit has concluded.

Now the drivers have driven the track for real, what do they make of it? Here’s what some of them they had to say:

It’s a high-speed circuit with very close walls and tight run-off areas, which requires maximum precision and concentration. The long straights here in Baku also make you run low downforce at a street circuit, which is something new in Formula One.

I’m pleasantly surprised with this track, I like it. Before today I had only driven it on the sim and I have to say that doing it for real is much better: in the sim the walls are transparent, while here you have the excitement of being so close to them… the adrenaline rush you feel around these streets is big and I really enjoyed it out there today. It’s a fun challenge and I look forward to tomorrow.
Carlos Sainz Jnr

In general the track itself is quite fun to drive, although some kerbs were coming off so we need to have a discussion (with the FIA) about that, and the exit of the pit lane is also not ideal so maybe they can open it up a little bit.

The track is quite slippery and you arrive from very high speeds and the braking is also not so easy, and in some areas it’s very tight so you have to be focused. You need to be careful in the runoff areas because it can be easy to get stuck in them.
Max Verstappen

The track isn’t easy – not because the layout is particularly difficult to learn but because it’s very slippery out there. It’s quite Monaco-esque in terms of braking and how close the barriers are – but you’re arriving at much higher speeds.

Otherwise it’s like a mixture of Valencia and Sochi with the smooth track surface and the style of the corners themselves. It’s a real challenge and I think it’s going to be tough for everyone over the weekend. It takes a lot of focus, which is something I like.
Lewis Hamilton

I knew when I walked the track yesterday that it was going to be good fun to drive – and today didn’t disappoint. It’s an amazing circuit: really challenging, no margin for error, and a real pleasure to drive.
Sergio Perez

The track is pretty cool. There are just some safety concerns at a few places like the pit entry, which we have to look into.
Nico Rosberg

I really like the track. It’s very demanding, it has some high speed corners and some twisty, more technical areas, so it’s definitely one of the most challenging tracks on the calendar, but at the same time it’s a lot of fun.
Valtteri Bottas

There are some good corners around here; Turn 14 is right on the edge – it’s mad, really – but the section past the castle is too slow.
Jenson Button

It’s an awesome circuit and quite a challenge.
Kevin Magnussen

What do you think of F1’s newest circuit? Give your verdict here:

5 comments on “What they say about… Baku City Circuit”