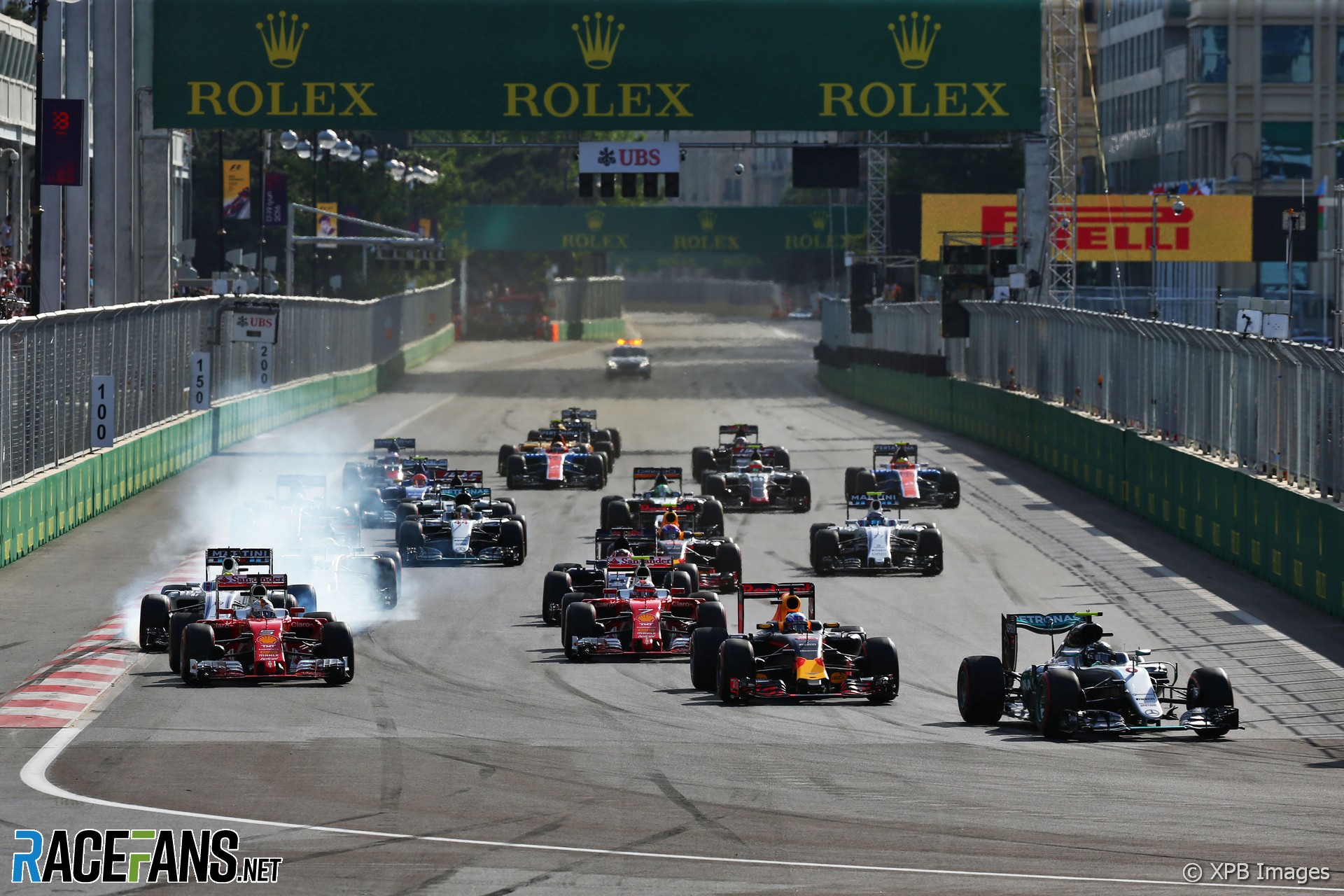 The ingredients were there for a cracking race.

F1’s newest circuit had proved remarkably fast for a street track. The two GP2 support races had been a frenzy of action, overtaking and incidents.

During the qualifying session Baku’s merciless walls had even caught out the world champion, and his trek to the front from tenth on the grid promised to be a major point of interest.

It seemed anything might happen. But very little did, and from pole position Nico Rosberg ran out an unchallenged winner.

All year long Mercedes’ performance advantage over its rivals has been slightly diminished from track to track. In Monaco they were even out-qualified in a straight fight.

But on this very different type of street track, Mercedes were streets ahead. Rosberg was over three-quarters of a second faster than the next-quickest car in qualifying.

Unusually, this was not a Ferrari or a Red Bull or even a Williams but Sergio Perez’s Force India. And a gearbox change penalty meant he could not take full advantage of his qualifying speed, and was bumped back to seventh. His team mate Nico Hulkenberg had failed to progress beyond Q2 after a spin and a communications mix-up.

So as the field assembled for the first Formula One race in Azerbaijan potentially the next three quickest cars on the grid after Rosberg were all starting outside the top three rows. In retrospect perhaps it should have been obvious he was going to walk away with this one, as he did.

The start was very orderly by the standards of F1 in 2016. Rosberg held his lead at turn one, moving off-line slightly to discourage second-placed Daniel Ricciardo from having a look, and that was the last anyone saw of him.

He was out of DRS range at the end of lap one and almost two seconds clear after three laps. The next time by his lead had almost doubled. Had Rosberg suddenly upped his pace? No: in fact he had already begun to take it easy, backing off by half a second. What had happened was Red Bull’s tyres had begun to go off.

“At the start we put ourselves in a good position and the aim was to get Nico, explained Ricciardo. “We managed to hold second and I felt pretty good in the first few laps, especially as I could see Seb [Vettel] wasn’t catching me.”

“After lap three we started to slide the rear and there was no way of controlling it. I went from being very optimistic about our race to being uncertain.”

His grip gone, Ricciardo was immediately devoured by Vettel and headed for the pits at the end of the fifth lap. Red Bull still intended to stick with the preferred strategy of pitting only once.

“I don’t think we had the wrong strategy,” reflected Ricciardo, “one stop would have been ideal but we had to adapt and were forced into a two-stop race”. The reason for this was once he bolted the soft tyres on the problem didn’t go away. Max Verstappen had the same problem and had already made his first it stop the lap before.

Ferrari were also of a mind to pit early, bringing Kimi Raikkonen in on lap eight and preparing to do the same for Vettel. But when he was told to come in Vettel, no doubt remembering his ill-fated early stop in Canada, queried the call and decided to stay out.

“I had a decent feeling,” Vettel explained afterwards, “the pace was quite OK, I thought, and then we decided to stay out so I was asking the team to stay out, the tyres felt OK and I wanted to keep going.”

Ferrari’s plan had been to cover off from the threat of Ricciardo, but Vettel’s decision meant he stood to lose out to his team mate who would ‘undercut’ him with an earlier stop. When Vettel finally came in on lap 20 he rejoined behind Raikkonen, who had briefly been the quickest driver on the track as Rosberg and Vettel continued to nurse their original sets of tyres.

By now the complexion of the race had changed, however. Raikkonen had strayed across the pit lane entry line using all four wheels, something drivers had been specifically forbidden from doing due to safety concerns at this very quick point on the track. He was handed a five-second time penalty (and points on his licence).

Vettel was immediately in the order of half a second or more faster than Raikkonen. When he caught his team mate the Ferrari pit wall ushered Raikkonen aside. As he made way he pointedly remarked that Vettel better have the pace to pull away. The next time around Vettel was over a second faster than him.

But what about Hamilton? The world champion hadn’t been able to progress as quickly as expected. He drove a cautious first lap and came around still in the tenth position he started from. Complicating matters was the fact Valtteri Bottas had been passed by Verstappen and was now running in front of the Hamilton. The slippery FW38 had used the same Mercedes power unit to hit a massive 378kph (234.9mph) in qualifying and was one of few cars in the race Hamilton could not expect to pass with ease.

The pair got past Daniil Kvyat and Verstappen and by lap ten were running fourth and fifth. Hamilton had now fallen 23 seconds behind Rosberg, however, so even when he finally made a move stick on Bottas his prospects of getting back in the hunt for victory now rested on a Safety Car deployment. But while the GP2 races had seen a total of seven, the grand prix passed without interruption.

Hamilton soon had another problem to contend with. His lap 15 pit stop put him on a set of soft tyres to the end of the race and he soon regained the fifth position he had been running in. But around this time he began to experience a loss of power from his engine.

“There was a configuration related to the management of Hybrid energy which unfortunately was not correctly tuned during our race preparations,” Mercedes’s executive director for technical Paddy Lowe.

“What this caused was premature de-rates down the straight, costing the driver around three to four tenths of a second per lap. It was only present when the driver selected a specific strategy mode on the steering wheel, with the other modes unaffected.”

Hamilton at first urged his team to investigate the performance-sapping de-rates, urging them to “pick up the pace” to find a solution. However the new restrictions introduced this year forbid teams from advising their drivers on how to optimise their car’s settings.

“Can I make a suggestion and you say if it’s OK or not?” Hamilton asked. “No that’s not allowed,” race engineer Peter Bonnington told him. “Unfortunately for Lewis, it took around 15 laps to rectify the problem,” said Lowe.

Team boss Toto Wolff said the problem Hamilton had was “unusual and counter-intuitive” and there was “no way Lewis could know what to change to solve it”.

Hamilton later said the fault “fixed itself” and that he “didn’t do anything”, although it was clear from his onboard camera he spent several laps cycling through different possible settings. Team mate Nico Rosberg also experienced a similar problem.

“Eventually [Hamilton] managed to find the right solution,” Wolff explained, “as Nico had done several laps earlier, having switched into the mode causing the problem part way through the race”. But by the time Hamilton was back to full power the next car ahead was too far up the road, so he immediately backed off to save his engine.

Ahead of Hamilton lay the Force India of Sergio Perez. He had gained two places at the start by positioning his VJM09 perfectly to take advantage of the scrap between Felipe Massa and Daniil Kvyat.

Red Bull’s demise had put him in pursuit of the Ferraris and now Raikkonen’s time penalty meant he only had to get within five seconds of his rival to ‘pass’ him. This he did on lap 28 when Raikkonen backed off to let Vettel though.

“In the moment I let him pass I lost 2.5 seconds in that lap and this did not help,” said Raikkonen. Perez passed him anyway on the final tour. “I could have for sure stayed in front of Perez but there was no reason to fight and maybe take some risks,” the Ferrari driver added.

Perez’s pass, like every other caught by the television cameras, had the unremarkable inevitability of every pass which takes place with DRS. Every DRS zone is in unnecessary, but at Baku the two consecutive zones triggered by a single activation point ensured any overtaking was accomplished with the minimum of drama.

The most joyous moment of racing throughout the whole weekend came when GP2 driver Antonio Giovinazzi, his DRS broken, nonetheless forced past his team mate to win Sunday morning’s race.

Many had hoped for similar drama in the F1 race but it wasn’t to be. “Today was a bit unexpected,” said Ricciardo afterwards. “I got everyone’s hopes up yesterday by saying it could be the race of the season, It was, however, pretty uneventful.”

This was quite an understatement.

79 comments on “Rosberg cruises to victory in forgettable Baku debut”