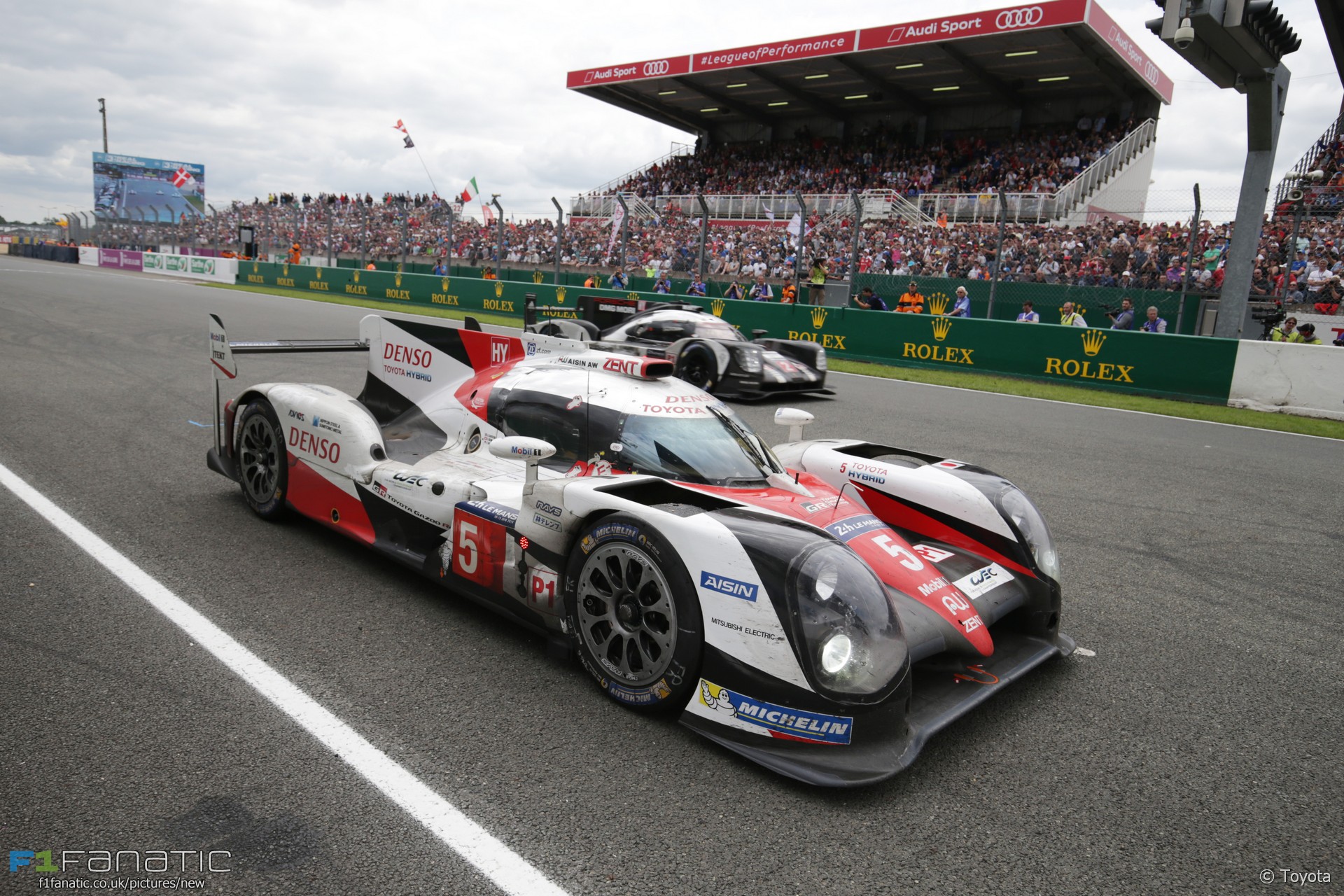 A stunning conclusion to the Le Mans 24 Hours saw the lead change hand just minutes before the chequered flag was shown.

It seemed Toyota’s long-awaited first victory at the 24 Hours of Le Mans was finally going to become reality until, with around six minutes to go, Kazuki Nakajima suddenly lost power at the wheel of his TS050.

Porsche, whose number two car had stalked the leading Toyota after losing the lead to it early in proceedings, therefore inherited a shock victory for Neel Jani, Marc Lieb and Romain Dumas. As Nakajima was unable to manage complete his final tour in within the maximum time allowed he along with team mates Anthony Davidson and Sebastien Buemi were not classified.

While Porsche sportingly hailed its LMP1 rivals, the fight for GTE Pro honours ended in acrimony. Both the winning Ford GT and the second-placed Ferrari 488 were given time penalties after both teams lodged protests against each other for infractions during the race.

Ford kept their victory, which coincided with their return to the category 50 years after their first win in the race, despite penalties for speeding in a slow zone and having a faulty wheel sensor. Ferrari were penalised and fined after failing to obey a black-and-orange flag which was shown because one of its light panels was not working.

Colin Turkington led Jason Plato in a one-two for Subaru in race one but the Team Dynamics Honda pair struggled, both finishing out of the top ten. Rob Collard snatched victory in the second race after Turkington and Plato collided.

The rain arrived from race three and Ashley Sutton passed pole sitter Sam Tordoff after a late Safety Car period. However Tordoff extended his lead in the championship as the series reached its halfway point.

Antonio Giovinazzi took a rare double victory on the Baku City Circuit despite making a dreadful start from pole position in the feature race. This provoked a first-corner pile-up which eliminated the likes of Alex Lynn, Pierre Gasly and championship leader Norman Nato, and also caused the first of many Safety Car periods.

Giovinazzi re-took the lead from Raffaele Marciello during a brief window of green flag running but a lengthy Safety Car period while a single car was recovered meant the race stopped three laps shy of the planned 29. Sergey Sirotkin demoted Marciello to third after out-dragging him to the finishing line on the final lap.

From eighth on the grid in the sprint event Giovinazzi moved to the front after a series of spectacularly chaotic Safety Car restarts. Nobuharu Matsushita, who took the lead from pole sitter Daniel De Jong at the start, was criticised for his tactics approaching the Safety Car line which triggered several crashes. He was later taken off by Raffaele Marciello and then banned from competing in the next round.

That put Giovinazzi’s team mate Pierre Gasly in the lead and on course for his first victory in any category since 2013. But Giovinazzi had other ideas, and despite a malfunctioning DRS passed his team mate for a superb win.

The drivers’ championship remains wide open: Points leader Artem Markelov is on 54, but any one of ten different drivers could be leading after the next race.

The Formula One race on the same track was comfortably won by Nico Rosberg:

Next weekend IndyCar heads to Road America for the first major open-wheeled race on the majestic road course since 2007. Meanwhile Formula V8 3.5 heads to Paul Ricard after seeing six different drivers win its opening six races. And NASCAR will make one of its two visits to a road course with its weekend at the Sonoma circuit in California.

Fans of street racing can enjoy the DTM and European F3 championships at the Norisring street circuit and the World Touring Car Championship on Portugal’s dramatic Vila Real course.