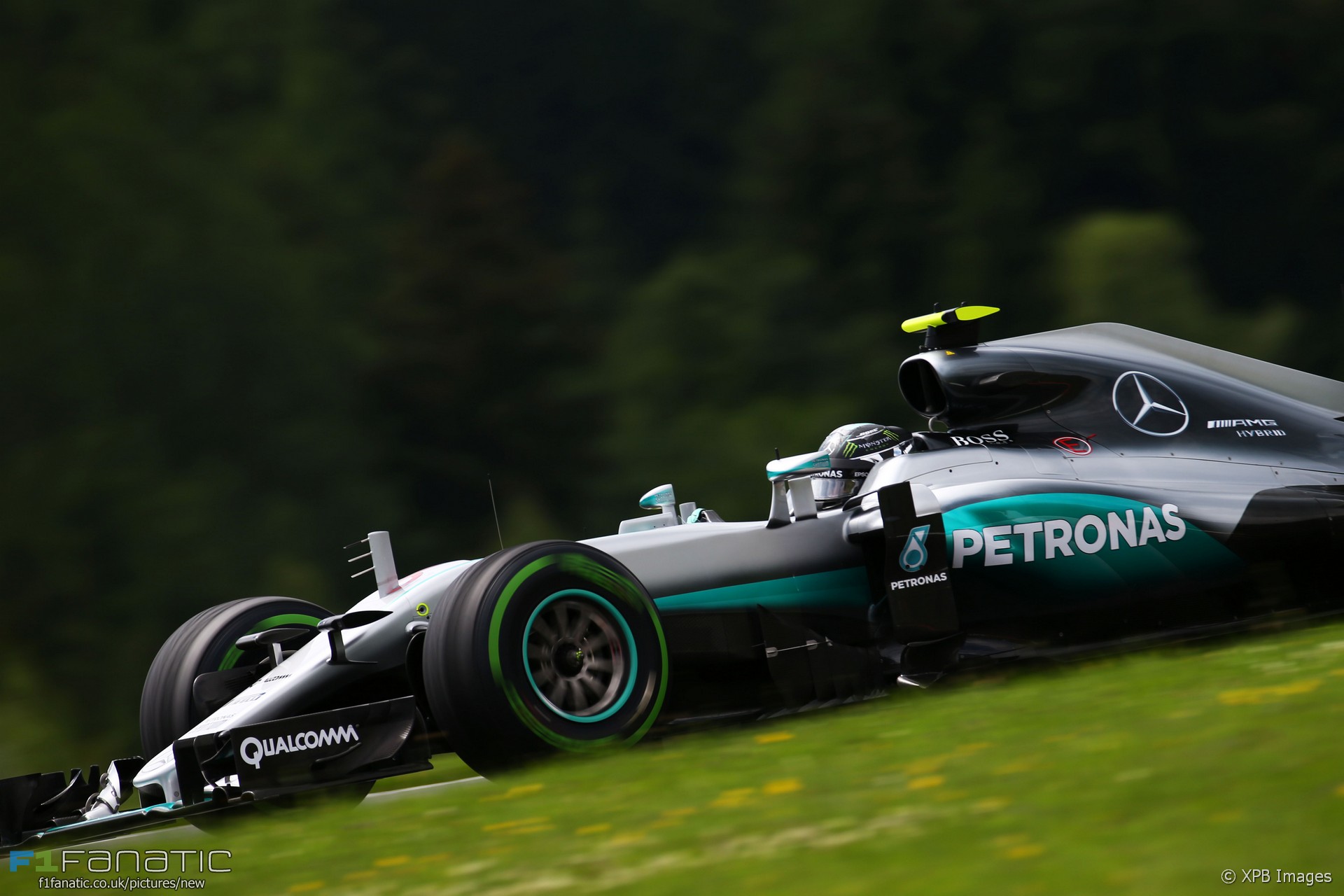 Nico Rosberg flew around the newly resurfaced Red Bull Ring and lowered the track record during the first session of the day. There should be faster times to come tomorrow – if it stays dry.

Ominously for Mercedes’ rivals, Rosberg believes the changes at the Austrian track have played into his team’s hands.

“The new asphalt seems to be suiting our car quite well,” he said, “maybe better even than the old Tarmac.”

“But tyre usage will be the decisive factor this weekend as we saw quite a lot of graining during our dry running.”

As we’ve seen already, Pirelli’s rubber seems especially fickle this season. Ferrari have had problems in qualifying and Red Bull were caught out with their race set-up in Baku.

The high mandatory tyre pressures exacerbates the problem, and in Austria the hike is even greater than usual. Fronts tyre pressures must be set at 22psi, rears at 19.5. Mercedes is believed to have the most advanced means of getting around the tyre pressure restrictions but others are developing similar practices.

The new surface is smoother in general and several bumps have been eased. That plus the ultra-soft tyres has led to a year-on-year reduction in lap times of around three seconds so far.

The critical interaction between tyre and track is made even more complicated by the new surface, which produced much warmer temperatures today than 12 months ago. The asphalt was around 10C warmer during the first session than it was last year, and by the start of the second session it had risen to 42C.

That meant when the downpour arrived it evaporated with a speed which surprised even seasoned paddock veterans. “I’ve never seen anything like that – ever,” remarked Paddy Lowe of Mercedes.

Despite that teams were left with little long-run data to crunch. Tomorrow’s final practice session – which is expected to be dry – will provide more clues about how the tyres are performing over a stint. The durability of the ultra-soft tyre, which has been around eight-tenths quicker than the super-soft so far, will be of particular interest.

There’s been little indication that any of Mercedes’ rivals will be quick enough to challenge them. Ferrari, who were quickest on Friday last year, were over six-tenths of a second slower today. Sebastian Vettel was caught out by his brake bias at the end of the second session and spun off at turn two.

Red Bull typically are not very competitive at their own track. They will be hoping tomorrow’s forecast rain, currently expected to arrive shortly after qualifying finishes, will make an earlier appearance. If it stays dry Williams may well out-qualify them.

McLaren tested a revised and heavily slotted rear wing but although their power unit’s energy deployment is better than last year reaching Q3 may be a stretch. Kevin Magnussen is much happier with his Renault, however, and the team look capable of progressing beyond Q1.