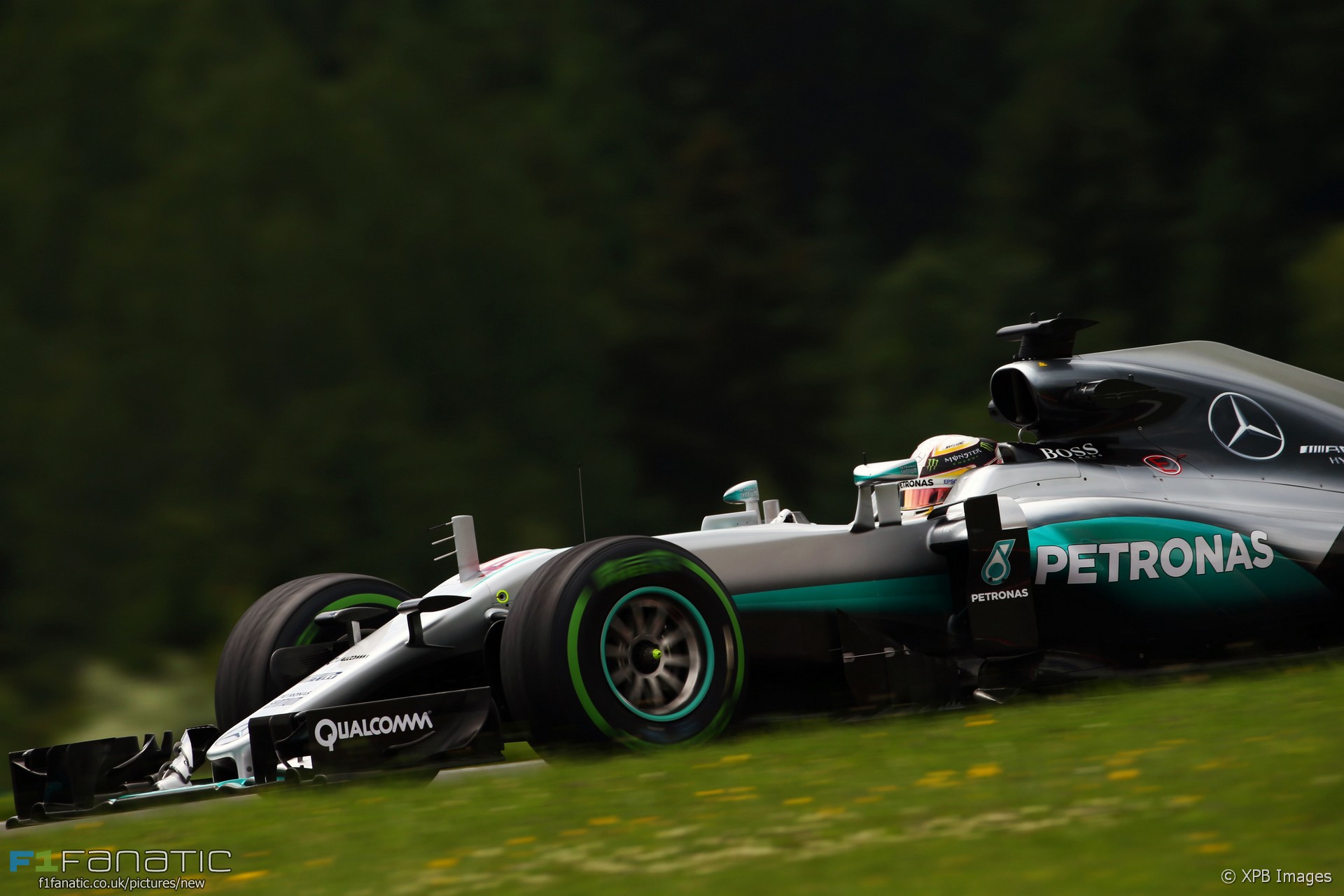 Ordinarily a wet qualifying session might be expected to play into the hands of Mercedes’ rivals. But today it probably helped strengthen Lewis Hamilton’s position heading into the Austrian Grand Prix.

The Red Bull Ring’s new surface is retaining much more heat than last year. In final practice track temperatures climbed towards 50C and Mercedes appeared to be in trouble with blistering tyres. Sebastian Vettel headed the times sheets. Hamilton came back into the pits shortly after starting his first run, troubled by how quickly his ultra-soft tyres were going off.

In qualifying – where the surface exceeded 50C before the rain arrived – both Ferrari and Red Bull found enough performance from the harder super-soft tyres to make it through Q2 on them. As they will start the race on those tyres, it puts them at a strategic advantage over the two Mercedes on ultra-softs.

However their ability to make full use of that advantage was blunted in the wet Q3, when inspired performances by a couple of wet-weather specialists provided Hamilton a valuable buffer over his closest rivals. Nico Hulkenberg will start from second place and Jenson Button is third.

So Hamilton will start the race on a three-lap-old set of ultra-soft tyres with two cars between him and his closest likely challenger – Kimi Raikkonen. The Ferrari driver’s position is under close scrutiny at the moment amid intrigue over who might switch teams next season, and many will be watching with interest to see whether he still has one Mercedes plus his team mate behind him when the chequered flag falls.

How well Hamilton’s first set of tyres hold up will have a significant bearing on his race. In final practice they started to go south after just four laps, and his opportunity to evaluate them further during that session was hampered by his team mate’s crash.

Mercedes looked much more comfortable in the cooler track conditions on Friday. Given that, the weather may be about to come to their rescue again. Tomorrow is expected to be cooler and cloudier, which should lead to considerably lower track temperatures.

Hamilton therefore should go into the race in a strong position to reduce Rosberg’s points lead. However nothing can be taken for granted. “For tomorrow everything can happen,” reflected Sebastian Vettel. “Maybe there will be some rain, it will be significantly cooler and it will matter how you look after the tyres.”

Several drivers have experienced suspension problems as a result of striking the new kerbs around the track. Mercedes have already beefed up theirs following Nico Rosberg’s crash. “It’s clear that you’d better not touch them,” Vettel added, though he doubts changes will be made before the race. “I think for next year we need to find a solution, but for tomorrow there’s nothing that can be done.”

Remaining tyres for the race

Is this going to be a straightforward win for Lewis Hamilton? Where will Nico Rosberg and Sebastian Vettel finish after their penalties?

29 comments on “Why the weather may aid Mercedes again”