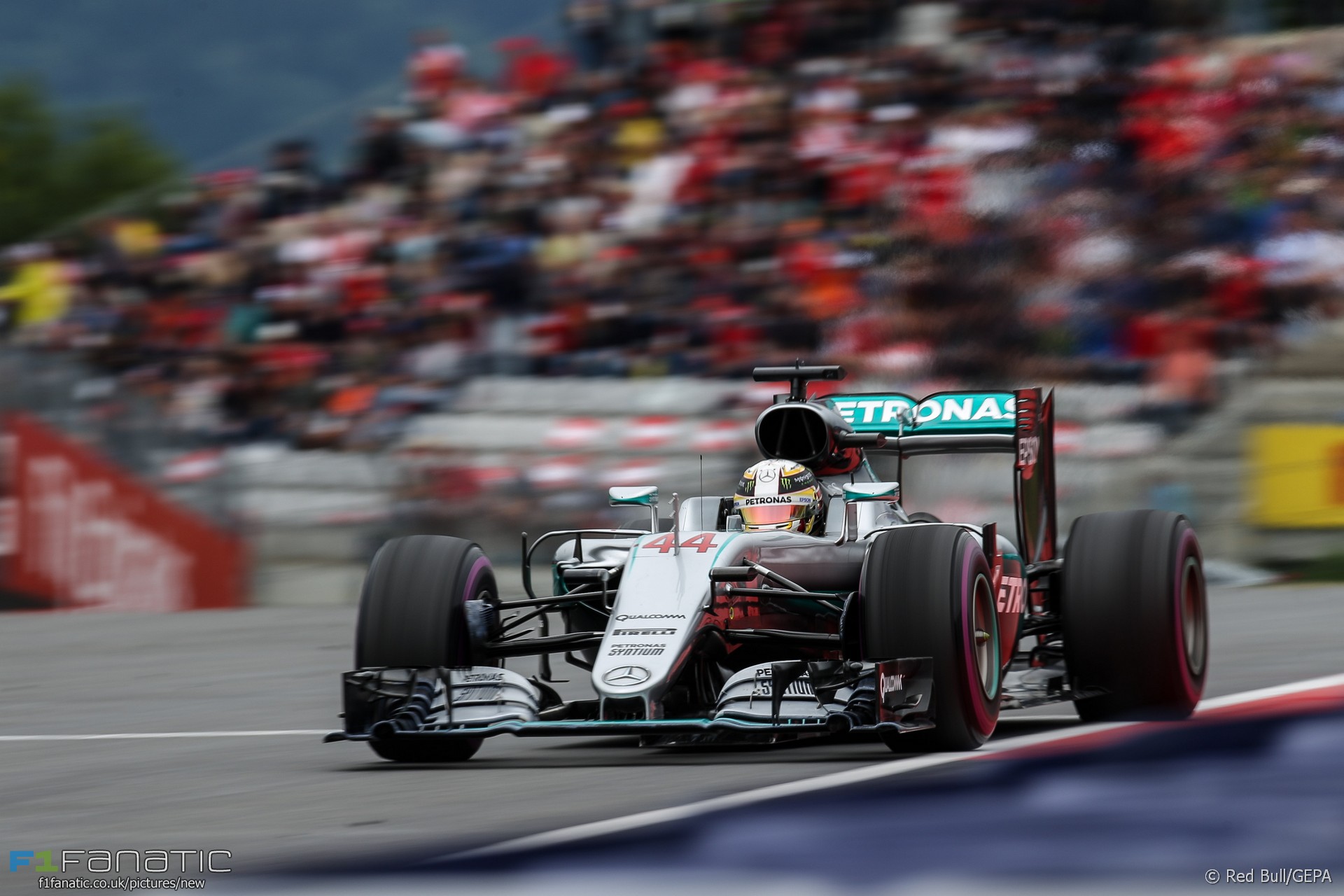 Lewis Hamilton says he intends to carry on racing as he did before after Mercedes warned its drivers not to collide again following the Austrian Grand Prix.

He and team mate Nico Rosberg were given “greater deterrents to contact” according to Mercedes following their last-lap collision at the Red Bull Ring.

However during today’s FIA press conference at Silverstone Hamilton said: “In all honesty our destiny has always been in our hands so it doesn’t really change anything.”

“We’re still able to race which is a positive, no team rules, orders, whatever it’s called, which I think is great for the fans. So I think everyone should be excited.”

Asked whether Mercedes’ deterrents were “scary” Hamilton jokily replied: “I guess I should say yes”.

Another journalist asked Hamilton if he would be prepared to obey team orders, citing the 2014 Hungarian Grand Prix as an example of him not doing so. “You’ve got to let it go, it was a couple of years ago,” Hamilton replied.

“I would, that’s my job, that’s what I get paid to do. So that’s what we agreed today, it’s what’s in our agreement. If you go back to 2014 and you listen to the manuscript you’ll understand I didn’t say ‘no’. I just said I wouldn’t get in the way. And he didn’t get close.”

The world champion wouldn’t be drawn on whether he was now forbidden from making forceful moves such as those he used on his team mate at Suzuka and the Circuit of the Americas last year.

“Unfortunately everything that’s been said is private and confidential,” he said. “But we’re still able to race. Obviously in all those races I was – the stewards deemed me racing so we, I would still race like that.”

Hamilton said he supports his team’s decision not to impose further team orders and said he would do the same himself in their position. “I would want them to race, that’s for sure, I wouldn’t bring in team orders. Because racing is why I’m here and why we’d be there. It’s to see the guys race.”

“I’d probably be even more understand-able that when you have two cars racing first and second there are going to be time out of 60 races together – I don’t know if it’s five collisions, I don’t know how many collisions we’ve had, but it’s a small amount compared to the number of successful races we’ve had and one-twos we’ve had.”

His last-lap victory was booed by some at the Austrian Grand Prix following the race, but Hamilton suggested some had been unaware about the nature of the incident at turn tow with Rosberg and had formed the wrong impression.

“Someone mentioned to me that some of the fans didn’t see everything that happened and also someone said that I ‘rammed’ Nico off so I’m understand if maybe that was the first reaction.”

“Whether some of them still feel the same way it doesn’t really make a big difference,” he added. “This weekend the cheers will make those boos so small.”