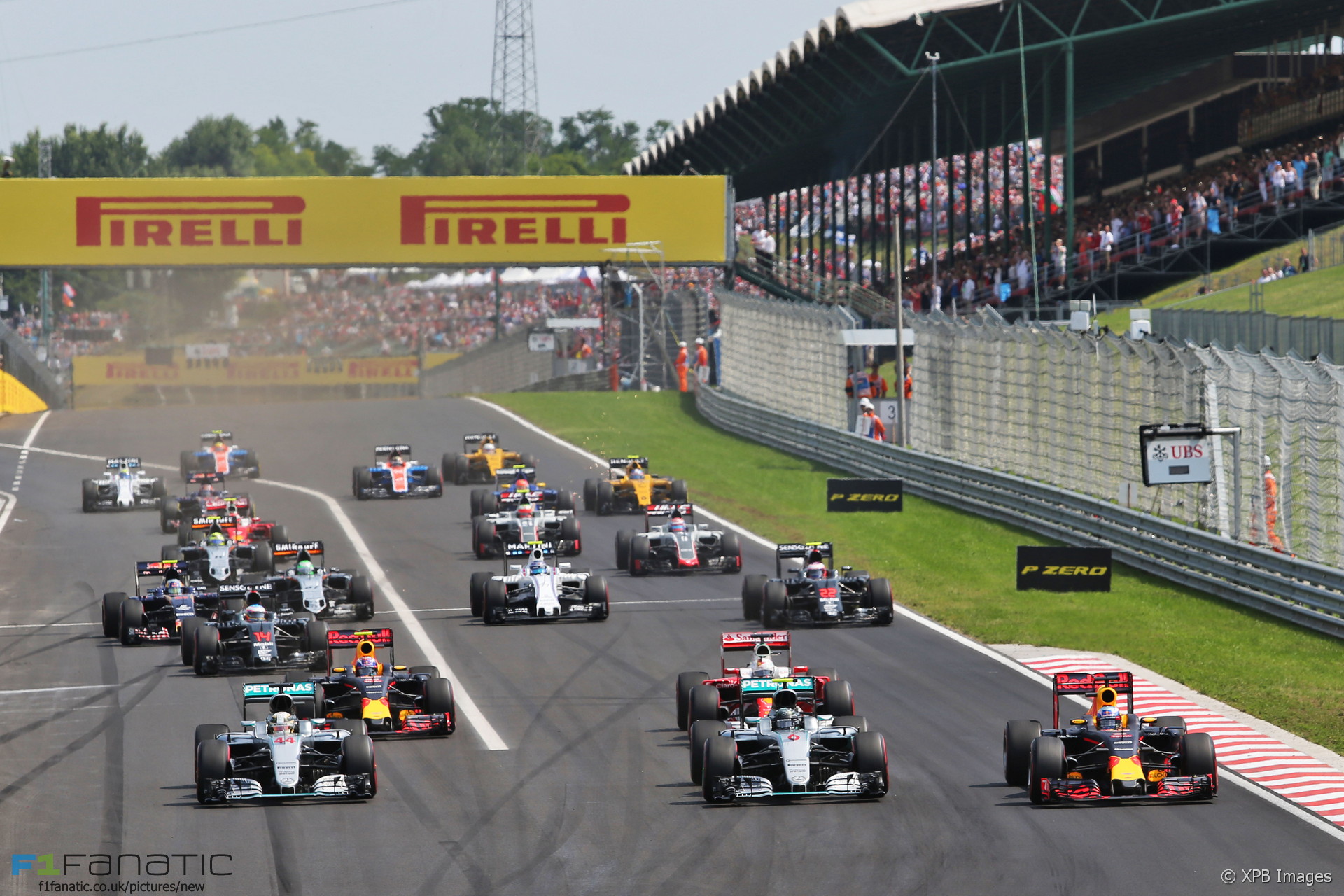 Many drivers left the Hungaroring knowing they could have achieved more. Here’s the F1 Fanatic verdict on how the field fared in the Hungarian Grand Prix.

Lewis Hamilton – A crash early in second practice compromised his race preparation. He nearly missed the cut for the top ten shoot-out after a mistake in Q2, but he would probably have been on pole position had it not been for an unfortunately-timed yellow flag. The race went better: he made one of his better starts this year to take the lead and successfully kept Rosberg at bay, though at times it was clear he was maintaining a very steady pace which almost prompted his team to switch their strategies.

Nico Rosberg – Rosberg was undoubtedly lucky that Alonso’s spin in Q3 compromised his team mate yet gave him a chance to take pole position. As he passed the yellow flags he backed off sufficiently for the stewards – just as Nico Hulkenberg and Kevin Magnussen did two races ago – and it’s unrealistic to expect a driver to do more. He was out-dragged at the start by Hamilton and Ricciardo and though he smartly re-passed the Red Bull and gave chase to his team mate it proved to be in vain.

Sebastian Vettel – At last had a weekend free of major problems and did well to split the Red Bulls at a track where the Ferrari was not the second-quickest car. At the first round of pit stops he successfully undercut Verstappen, who then got stuck behind the other Ferrari. He then ran a long middle stint to give him a run at Ricciardo at the end of the race, but couldn’t find a way by.

Kimi Raikkonen – Did Raikkonen miss a place in Q3 solely because he was the first to set a time on a drying track? Vettel set his lap time 24 seconds after his team mate and was 1.3 seconds faster. But other drivers who had the benefit of setting their times after their team mate failed to beat them, such as Button, so track evolution doesn’t explain everything and Raikkonen could have made more of the chance he had. Starting outside the top ten meant he could spend the entire race on new tyres, and useful passes on Perez and Gutierrez early on allowed him to make the most of that strategy. But at the end of the race despite newer, softer tyres and DRS he was out-foxed by Verstappen – Raikkonen damaged his front wing trying to pass the Red Bull.

Felipe Massa – Didn’t have access to the new Williams floor but also spoiled his qualifying by crashing on the wet track. His car was repaired overnight but a problem was discovered with his steering rack after his reconnaissance lap and Massa wasn’t able to get it fully to his liking before the start. A game effort to pull off a one-stop strategy did not work and he had to make a late extra pit stop.

Valtteri Bottas – Given the difficulties Williams usually have in the wet, reaching Q3 was an achievement. He made it past Hulkenberg at the start but lost out in the race to the end against Sainz.

Daniel Ricciardo – Got within two-tenths of Hamilton in qualifying and beat his team mate and felt he would have been close to Rosberg’s pole time without the yellow flag. A rapid start allowed him to briefly split the Mercedes but he got boxed in behind Hamilton, allowing Rosberg through. An aggressively early second stop proved an unsuccessful attempt to get back ahead, and left him running a long, 37-lap stint to the end under constant pressure from Vettel.

Max Verstappen – Not quite on Ricciardo’s one-lap pace and despite driving “like a grandma” in the opening stint his rear tyres began to go off sooner than his team mate’s. This was doubly problematic as Ricciardo ahead had pit stop priority, leaving Verstappen unable to keep Vettel behind. He also got caught behind Raikkonen at one point, but when the roles were reversed he fended the Ferrari driver off superbly in the closing stages on older rubber.

Nico Hulkenberg – Beat Perez comfortably in qualifying but as the track dried in Q3 there was to be no repeat of his damp-track heroics from Austria. He lost a place at the start and two at his first pit stop, which doomed him to an afternoon in the slipstream of other cars. It got worse on his second visit to the pits when he let the clutch slip, delaying his tyre change and losing another place to Palmer. However he salvaged a point.

Sergio Perez – A mistake in Q2 cost him dearly: he ended up a second and a half slower than Hulkenberg and missed the cut for the top ten. He also had problems in the pits: after abandoning an attempt to run a single-stop race the team weren’t prepared for his second visit, costing him over eight seconds. But even without that he wouldn’t have beaten Hulkenberg to the final point.

Kevin Magnussen – Both Renault drivers were compromised in the stop-start Q1 session and missed out on chances to progress further. Having qualified behind Palmer he lost time early in the race when Wehrlein passed him at the start, which ultimately wrecked his chances of jumping the Haas drivers at the first round of pit stops as his team mate did. Magnussen therefore spent the rest of the race reading Grosjean’s rear wing.

Jolyon Palmer – Had put in one of his best performances of the year so far until the car got away from him at turn four on lap 47, dropping him three places to 13th. Prior to that he’d out-qualified Magnussen in difficult conditions and got ahead of the Haas drivers with a longer first stint. “I turned in the same as normal at turn four,” he said. “I wasn’t hanging everything out and I was looking after the tyres – but for some reason I lost the car in a massive snap.”

Daniil Kvyat – Although Toro Rosso managed to get Kvyat a late run in Q2 when the track was at its driest, he complained about losing time behind Button and said his crew did not have his tyres ready soon enough. He missed the cut – lapping over four seconds slower than Sainz – which meant he started six places behind his team mate. He was in the wrong settings at the start of the race and fell to 20th place, which made for a long day in the office.

Carlos Sainz Jnr – Took advantage of Raikkonen’s struggles in Q2 to qualify a superb sixth place – it’s doubtful the car was capable of more. Alonso jumped him at the start, however, and he was unable to re-pass the McLaren.

Marcus Ericsson – Had his second crash in as many racing Saturdays which forced him to start from the pit lane. He got stuck behind Nasr early on but as the Manor driver was one-stopping Ericsson easily moved ahead. His pace wasn’t on a pair with his team mate’s, however, and an over-ambitious tyre-gamble meant a fourth pit stop which left him behind Wehrlein.

Felipe Nasr – Nasr got his car into Q2 and showed Sauber were capable of managing a normal tyre strategy in the race. But the under-developed C35 was always going to struggle at a circuit where downforce is at a premium. Finishing two seconds behind Magnussen was a respectable effort.

Fernando Alonso – Was ‘Mr Seventh place’ at the Hungaroring and it’s unlikely the McLaren could realistically have finished higher. His slip-up in Q3 was the only blot on an otherwise very strong weekend.

Jenson Button – Might have out-qualified Alonso had it not been for the yellow flags which appeared after his team mate’s mistake. His race was ruined by multiple technical problems and, to make things even worse, a penalty for receiving assistance on the radio.

Pascal Wehrlein – The final red flag in Q1 came out eight-tenths of a second before he crossed the finishing lap. His lap time would have been good enough for eighth place, but as it couldn’t be counted he was eliminated. In the race he briefly ran as high as 16th before the inevitable tyre degradation caught up with him, though he still finished in front of one Sauber.

Rio Haryanto – Crashed in Q1 and toiled fruitlessly on a one-stop strategy in the race.

Romain Grosjean – Nearly pulled off a shock in Q2: he was just one-tenth of a second away from knocking Hamilton out of the top ten. The race was a disaster, however: struggling with low-speed understeer, he slipped back to 14th place.

Cast your vote here and explain why you chose the driver you picked in the comments: