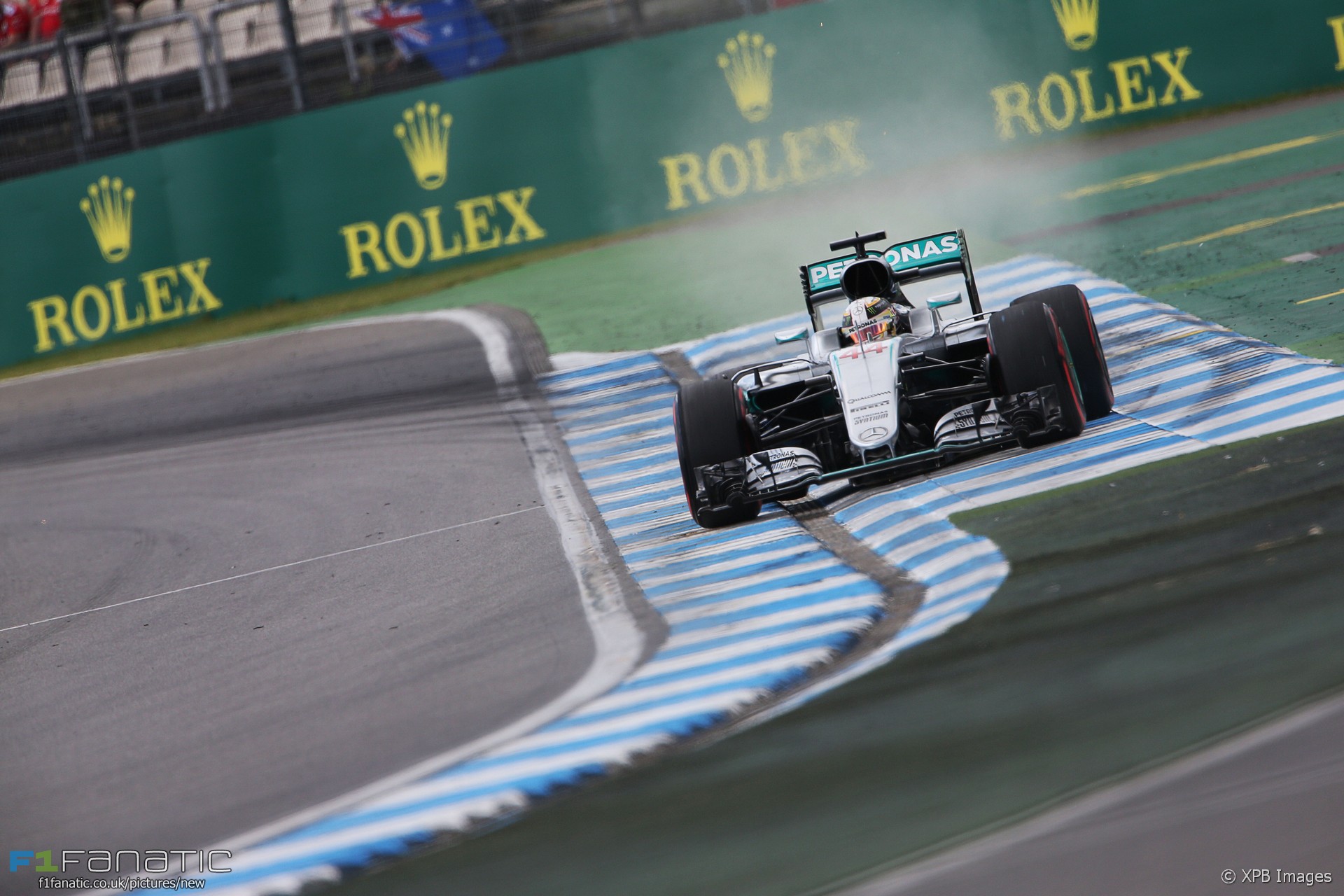 Red Bull believe their race pace is reasonably close to Mercedes this weekend, but the silver team may have grabbed a strategic advantage for the race in qualifying.

By running on soft tyres in Q1, the silver cars have reserved a fresh set of super-soft tyres for the race. As they also have a two sets of soft tyres the Mercedes drivers could have the option of three-stopping in the race.

Lewis Hamilton used a three-stop strategy at the last race at this track two years ago as he fought his way from the back of the field to finish on the podium. This was the preferred strategy for seven of the ten points-scorers in the race, though Nico Rosberg could afford to cruise home on a two-stop strategy as he was under little pressure from behind.

A three-stop strategy is viable at the Hockenheimring because the time lost making a pit stop is comparatively low. And we’ve seen some seriously quick pit stops this year – such as the unofficial record set by Mercedes in the last race.

The speed of the Red Bulls could be enough to force the Mercedes to run closer to their maximum pace. We’ve seen several times already this year Red Bull are content to make aggressively early pit stops to try to gain the benefit of the undercut – as Daniel Ricciardo did in Hungary. However they only have one new set each of super-softs and softs, limiting their strategic options compared to Mercedes.

Ricciardo, third on the grid, will also start the race at a slight disadvantage. “I’ll start the race on slightly older tyres because I had to do two laps in Q2,” he explained, “which means they are not as fresh for the start but it’ll be fine.”

Red Bull once again banished the Ferraris to the third row of the grid. Max Verstappen lines up one place in front of Kimi Raikkonen, ready to pick up where they left off six day ago.

The first corner at the Hockenheimring is a bit of a trouble spot. Last time F1 raced here Felipe Massa was flipped after a collision with Kevin Magnussen.

As in Hungary Hamilton lines up behind Nico Rosberg on the front row. But after passing his team mate at turn one last week he’s ready to play it cautious at the start tomorrow if he needs to.

“This is a track where you can overtake,” said Hamilton, “so I don’t have to go for it at the first corner”.

Although drivers have been given greater freedom with track limits this weekend they will still have to give the outside of this corner some respect. Sergio Perez was briefly launched by the kerb at the end of the run-off area during practice.

There have been other incidents during the weekend too. During Saturday’s GP2 race Philo Paz Armand was launched by the same kerb. Earlier this year at the same point on the track Will Buller’s Formula Three var was flipped over during a test. The levels of downforce F1 cars produce may prevent that, though it’s not something which can necessary be taken for granted, particularly when the cars are running in the slipstream of each other.

Earlier on at the outside of that corner GP3 driver Alexander Albon found another launching pad during their race. Drivers may be able to exploit track limits more this weekend but they will have to do so with caution.

Although some weather forecast give no indication of the possibility of rain tomorrow, the teams are alert to the possibility. “There is talk of some rain tomorrow,” said Nico Hulkenberg, who starts eighth after a penalty, “to be honest I would not mind a shower during the race but let’s wait and see what happens.”

Drivers’ remaining tyres for the race

Will Rosberg win – and re-take the championship lead – in front of his home crowd? Can Red Bull use their race pace to take the fight to Mercedes?

33 comments on “Hamilton eyes chances to pass Rosberg in race”