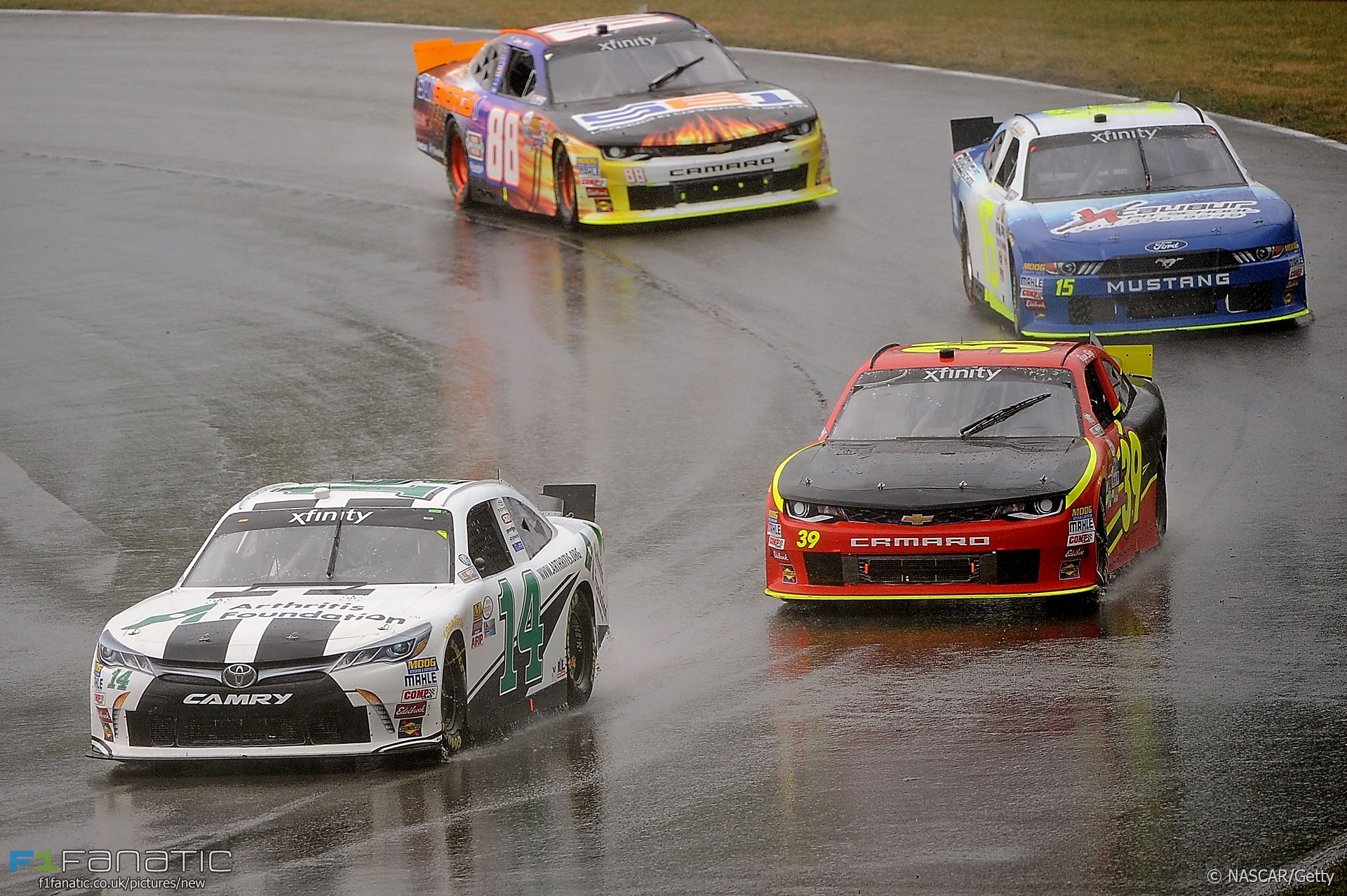 NASCAR’s top category famously doesn’t race in the rain but the same doesn’t apply to its junior series. Saturday’s rain-hit race at Mid-Ohio was therefore a rare chance to see stock cars in action on a wet track, with predictably chaotic results.

Elsewhere the British Touring Car Championship headed to Knockhill and Moto GP races at the Red Bull Ring for the first time since 1997.

The track was dry when the green flag dropped at Mid-Ohio but within a few laps the rain appeared and a caution period was thrown while the drivers headed to the pits for wet weather tyres.

While a series of leaders spun off in the deteriorating conditions part-time driver Justin Marks rose to the front to claim his first victory in the championship ahead Sam Hornish Jnr. Ex-F1 driver Nelson Piquet Jnr retired early following a collision.

The most successful driver in terms of wins in BTCC history, Jason Plato, fitting won in his 500th start from pole position at Knockhill. But he had to see off serious pressure from Jack Goff in the closing laps due following a Safety Car period to deliver his first win of 2016 ahead of Goff and Colin Turkington.

Race two was an absolute thriller as Matt Neal came through from eighth on the grid and took advantage of his soft tyres and the leading quartet squabbling to slice through and take a surprise victory. Plato looked set for a second successive win after 21 action-packed laps of impressive defensive driving from Sam Tordoff, Goff and Turkington, but as the latter two fought each other off-track at the hairpin, a quickly closing Neal seized his opportunity to move into third. Neal then used his superior tyre grip to breeze past both Tordoff and Plato – with the former following him through – to take his third win of the season.

The top six were reversed for the final race, with Mat Jackson being promoted to pole position. He started the race having to defend vigorously – a sight that would quickly become the normality – from Rob Collard and Turkington, but the two collided handing advantage to championship leader Tordoff. Try as he might however the BMW driver failed to make it past Jackson’s Ford, with the rest of the top seven also in stalemate all the way through until the flag.

The new United States Formula Four championship was in action for the second time last weekend at Mid-Ohio. The series kicked off at the same venue last month – highlights above.

Moto GP returned to the Red Bull Ring after an 18-year absence – and with it Ducati returned to the top step of the podium for the first time since 2010 thanks to a maiden win from Andrea Iannone.

Andrea Dovizioso followed his team mate home in second while reigning champion Jorge Lorenzo took third. The final corner on the track was modified to make its limited run-off safer for the riders.

Did you see any of the above racing this weekend, and if so what did you make of it? Or did you watch anything we haven’t covered? If so let us know in the comments below.

Up next week are IndyCar and Super Formula, with WRC, NASCAR and DTM also back in action.