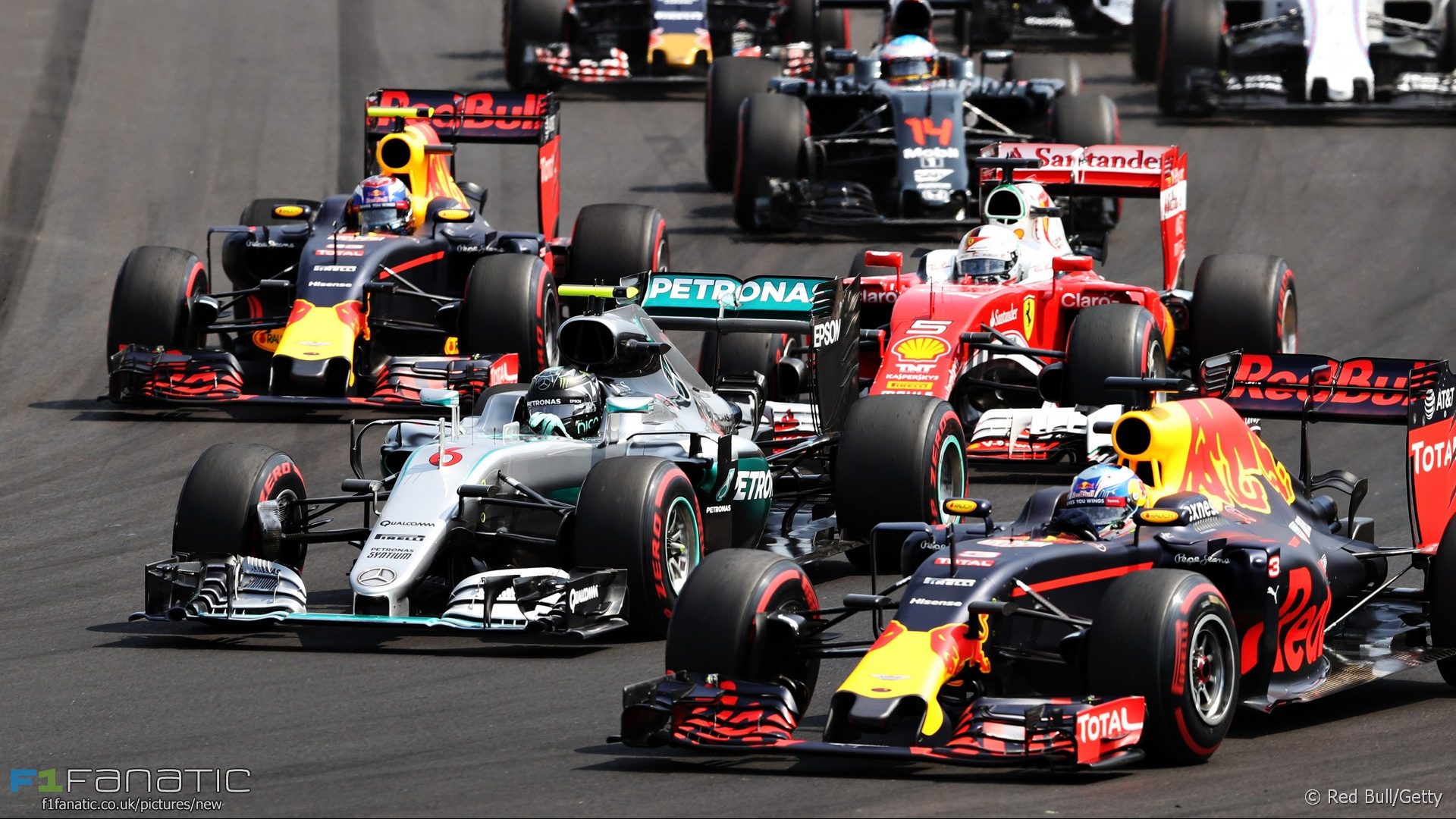 Who are the top five drivers of 2016 so far? Here’s the final part of F1 Fanatic’s mid-season driver rankings.

In what has typically been the fourth-quickest car on the grid at best, Sainz’s results have been remarkably consistent, including four eighth places and three ninths. Potentially better results have been lost to sluggish Toro Rosso pit work.

But in Spain, where the two Mercedes took each other out on the first lap, Sainz produced a peak of sixth place. This was a well-timed performance by Sainz who had just been overlooked for promotion to Red Bull in favour of his team mate. This may have been a closer decision than it initially appeared, for although Verstappen bagged the most during their brief stint as team mates this year Sainz was the victim of others in Bahrain and Russia.

The last race was arguably the only occasion so far where Sainz has failed to score due to an error on his part. Even then time lost in the pits was partly to blame. Aside from a touch of over-exuberance during qualifying in Canada this has been a very strong season for him so far.

What’s your verdict on Carlos Sainz Jnr’s 2016 season so far? Which drivers do you feel he performed better or worse than? Have your say in the comments.

Verstappen endured a frustrating start to the season in Australia where a tactical error by his team not only dropped him down the running order and cost him a place to his team mate. His radio messages left no one in any doubt what he thought of their error, and an inconsequential spin while trying to pass his team mate prompted many hasty articles about how he was a hot-headed teenager who’d been promoted too quickly.

There were distinct tones of ageism to much of the coverage of Verstappen at the time, and the in context of what came later it now looks rather foolish as well. Three races later Red Bull took the astonishing decision to promote Verstappen to the top team, and he produced the even more astonishing outcome of winning his first race for them.

While Verstappen was a little fortunate on the day, since then he has arguably produced better drives for less of a reward. His pass-of-the-season move on Nico Rosberg at Silverstone ultimately yielded second. He’s proved more than a match for Kimi Raikkonen, too, who on three occasions has had to follow the Red Bull home and instead of whingeing about his rival’s reluctance to being overtaken could do with taking notes.

Verstappen’s error-strewn Monaco weekend cannot be overlooked, however. Nor can the fact he’s only out-qualified his team mate once since joining Red Bull. But his status as F1’s most exciting new talent is now unquestionable.

Took a surprise win at Spain and his aggressive driving is entertaining to watch.
@UltimateUzair

What’s your verdict on Max Verstappen’s 2016 season so far? Which drivers do you feel he performed better or worse than? Have your say in the comments.

Baffling strategy errors, grid penalties due to broken gearbox and a ‘did not start’ in Bahrain after a power unit failure. Ferrari have lost Vettel an awful lot of points so far this year.

Australia and Canada were the big ones that got away: both occasions when strong qualifying performances and excellent starts by the four-times champion got him into an early lead which could and arguably should have been converted into wins – especially in the season-opening race.

Commendably Vettel hasn’t vented at his team in public yet but he was furious after being taken out in Russia by Daniil Kvyat. Yet more lost potential points.

Approaching the summer break Vettel’s form took a dip which he will need to reverse when the season resumes. He was sub-par at Silverstone (though he had yet another gearbox penalty) and didn’t get his car set up well in Germany. But the difference in performance between the two Ferrari drivers has been close to what we saw last year, even if the points scores doesn’t reflect it.

Still performing very well, which is more than can be said of practically everyone at Ferrari this season.
@GeeMac

What’s your verdict on Sebastian Vettel’s 2016 season so far? Which drivers do you feel he performed better or worse than? Have your say in the comments.

According to Hamilton, his appearance at the top of the drivers’ standings at mid-season having been 43 points down on his team mate after five races is an incredible turnaround. Realistically, given that the Mercedes remains by far the best driver and Hamilton is dependably a much better driver than Nico Rosberg, what we’re really looking at here is regression to the mean.

But that overlooks both how solidly Hamilton has driven for much of the year and the fact that much of his initial setback was not of his own doing. A spate of early-season power unit problems, particularly in qualifying, put his team mate in a stronger position in several races and Rosberg usually capitalised on those chances. Though its true Hamilton made life harder for himself with poor starts in Australia and Bahrain.

Since the flyaway races ended Hamilton has been back to his formidable best and duly won six of the last seven races. It took a slip-up from Red Bull for him to win his first race since October, but he’s grafted for the rest of them, notably in Austria where he calmly prevailed in a last-lap fight with Rosberg.

His season is now firmly back-on-track, and even the inevitable power unit penalties he will take in the second half of the season are unlikely to prevent a fourth world championship title.

Completely untouchable recently after a difficult start to the season due to reliability problems.
@LolzerBob

What’s your verdict on Lewis Hamilton’s 2016 season so far? Which drivers do you feel he performed better or worse than? Have your say in the comments.

The last race was the first time Ricciardo had finished higher than he qualified since the second round of the championship. Surely that’s not a fitting record for the driver at the top of this list?

Not necessarily: Ricciardo’s superb qualifying performances have at times set the bar beyond what the Red Bull can reach in the races, particularly when his starting positions have often been further elevated by other drivers’ penalties. He’s also had periodic bouts of ill-fortune which seem to lie in wait until he is in a position to win a race.

In China he stuck his car on the front row and took the lead at the start only to be struck down by a puncture. His first genuine shot at victory came in Spain, but Red Bull needed to cover both strategy options to see off the threat from Ferrari and Ricciardo found himself on the wrong one. Then came Monaco, where the number three Red Bull showed everyone the way to go all weekend long until his team fluffed his pit stop, leaving him second.

Nonetheless Ricciardo has delivered points in every race with a single exception: 11th place in Russia having been caught up Kvyat’s first-corner crash. There’s no doubt Verstappen’s arrival has led Ricciardo to raise his game and the newcomer can point to Canada and Austria as examples of him beating Ricciardo on merit in a straight fight. The scrap between these two in the second half of the season promises to be more compelling than the fight for the world championship.

Staking his claim as being among the top echelon of drivers in the world, and a champion of the future. Classy, consistent, assured performances have proven that 2014 wasn’t a flash in the pan.
@William-Brierty

What’s your verdict on Daniel Ricciardo’s 2016 season so far? Which drivers do you feel he performed better or worse than? Have your say in the comments.