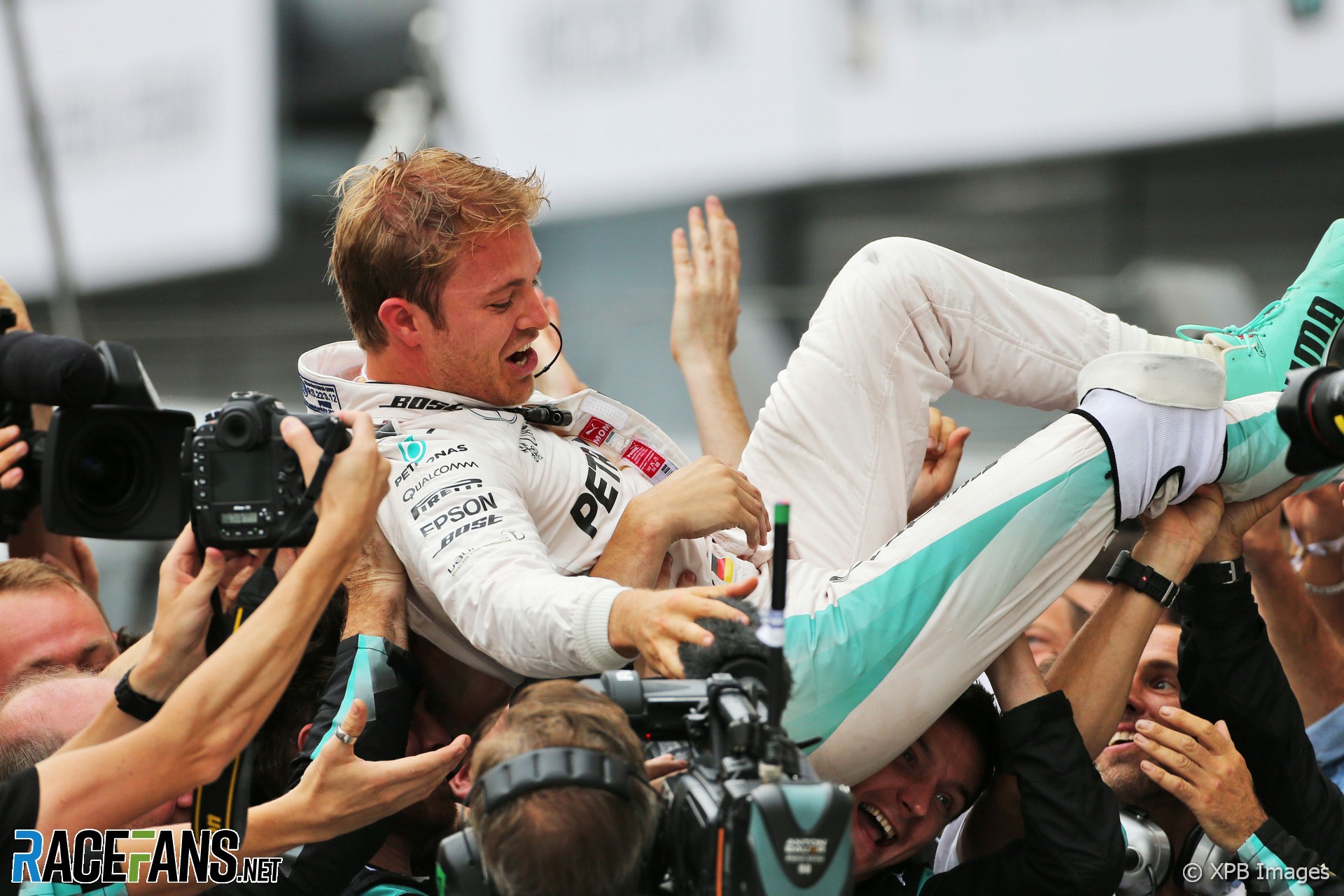 Having dominated proceedings at Monza in the two days prior to the Italian Grand Prix, all it took was one mistake for Lewis Hamilton to undo all of his hard work.

And the driver perfectly placed to take full advantage once again was his team mate, Nico Rosberg – who now lies just two points behind Hamilton as the championship moves into its final phase.

To Melbourne, Bahrain and Montreal we can now add Monza: all venues where Hamilton has started from pole position but surrendered his advantage on lap one. The instant the red lights went out it was clear Rosberg had got away better, and by the time they had emerged from the first corner both Ferraris had squeezed past along with Valtteri Bottas and Daniel Ricciardo.

Hamilton apologised to his team on the radio. But after he said “I knew my engineers would be worried and nervous of how the start went, so that’s why I tried to put their minds at ease”.

The championship leader said he didn’t know what had gone wrong with his start. “I did the sequence, everything exactly the same and I think I just got lots of wheelspin. A bit like Nico’s start perhaps in Hockenheim.”

Hamilton had been in this situation two years ago at the same track. On that occasion a problem with his start system dropped him to fourth place, yet he was able to catch and pass Rosberg. This time it would prove a tougher task, partly because he had fallen two places further back.

He made light work of Ricciardo’s Red Bull, however, which Mercedes power easily out-dragged on the run from the Rettifilio to the Roggia. The Mercedes power unit in the Williams of Bottas, however, presented a trickier challenge. A late defensive move from Bottas repelled one of Hamilton’s attacks. But soon afterwards DRS put the matter beyond doubt.

However it was now lap 11 and Rosberg already had 12 seconds and two Ferraris between him and his team mate. Worse for Hamilton, his soft tyres had deteriorated as he tried to pass Bottas, and so even after emerging in clear air Rosberg continued to pull away. By lap 16 that gap was almost 15 seconds.

From then on Hamilton’s pace improved and having complained about his tyres on the radio he now reported that were performing better, allowing him to delay his pit stop. But Rosberg, with the luxury of being able to nurse his tyres from the start, was in an even more comfortable position. He came in one the lap before Hamilton and there was never any question of him losing the lead.

The Mercedes drivers pitted just before half-distance, around 13 laps after their Ferrari rivals. The silver cars had the advantage of being able to start the race on the more durable softer tyre, having been quick enough to use it to get through Q2 the day before. Ferrari and the rest could not, and having started on the super-softs a two-stop strategy proved the most realistic strategy for them, though it compromised their performance relative to Mercedes.

The upshot was Hamilton never needed to worry about overtaking the red cars. He got within two-and-a-half seconds of Kimi Raikkonen before the Ferrari driver’s second stop, but once that was done Hamilton had a clear run at his team mate.

Not that he could do anything with it. Hamilton’s one-lap pace advantage had been unquestioned on Saturday, but though he could occasionally find more pace from the medium tyres in the second half of the race, consistently reaching it proved impossible. Then with 15 laps to go he seemingly settled for second place.

Despite a slow first pit stop Sebastian Vettel maintained his position ahead of Raikkonen and finished there. The battle for fifth place was more absorbing.

Bottas had produced a superb lap to take fifth on the grid but he lost the place with six laps to go following an inspired attack from Ricciardo. Unable to get anywhere near the Mercedes-powered car on the straights, Ricciardo launched at the apex of the Rettifilio chicane and brilliantly stopped the car in time. It was up there with Hamilton’s pass on Raikkonen nine years earlier as one of the most audacious moves that piece of asphalt has ever seen.

Around the same time Max Verstappen, who had slipped back when his car went into anti-stall at the start, completed a similar move on Sergio Perez at the Roggia to capture seventh place. Force India had used an early pit stop for Perez to get him ahead of the Red Bull but the VJM09 wasn’t at its best on Monza’s long straights and eighth was the best they could manage.

Perez was separated from team mate Nico Hulkenberg by Felipe Massa, who got his weekend back on track with a great start from 11th on the grid.

Esteban Gutierrez’s hopes of a first points finish of the season disappeared when he made a terrible start, falling ten places to 20th. Team mate Romain Grosjean fared rather better, getting up to 12th and moving ahead of Fernando Alonso to finish just outside the points.

It had been a frustrating race for the McLaren driver, who ran ninth at one stage but lost time in the pits when McLaren’s traffic light stuck on red and then disputed his team’s choice of strategy. At the end of the race he put a fresh set of tyres on and banged in the fastest lap. “We didn’t really have the pace to be in the points today, so finishing 11th or 14th didn’t really make much of a difference,” he said. “But at least we finished the race on a positive note.”

Before Alonso pitted he had been passed by Jenson Button despite the other McLaren having fallen to last on lap one after being forced wide by Felipe Nasr. “I had a lot of fun out there and pulled off some good overtaking moves,” he said, “including one around the outside of Parabolica”.

Nasr’s race was over quickly. He began lap two vying for position with Jolyon Palmer, but left too little room for the Renault at the Rettifilio and the pair collided. The stewards issued him a ten-second penalty as Sauber were in the process of withdrawing him from the race – they wisely sent him back out to serve it before anyone could think to hand him a sanction for Singapore instead.

Rosberg’s seventh victory of the win may have been straightforward but it was unquestionably deserved. And he was quick to point out it was his better start which had won it.

“It’s the rule change,” he said of the pre-season change to the regulations on start systems, “it makes it more challenging because now it’s down to the driver to do it. It’s more difficult.”

Hamilton, unsurprisingly, preferred to put a different spin on the matter. “I don’t agree that it’s more down to the driver,” he said.

“I think the driver thing is the same as it was before, it’s just that we have a relatively inconsistent clutch. In the past we were able to be told our clutch temperature and it was easier to hit our target as well but now it’s a lot less easy to know what your clutch is going to be delivering and what it’s not.”

Whichever view is right it wasn’t the first time Hamilton has fluffed a start this year – and Rosberg will be hoping it isn’t the last.