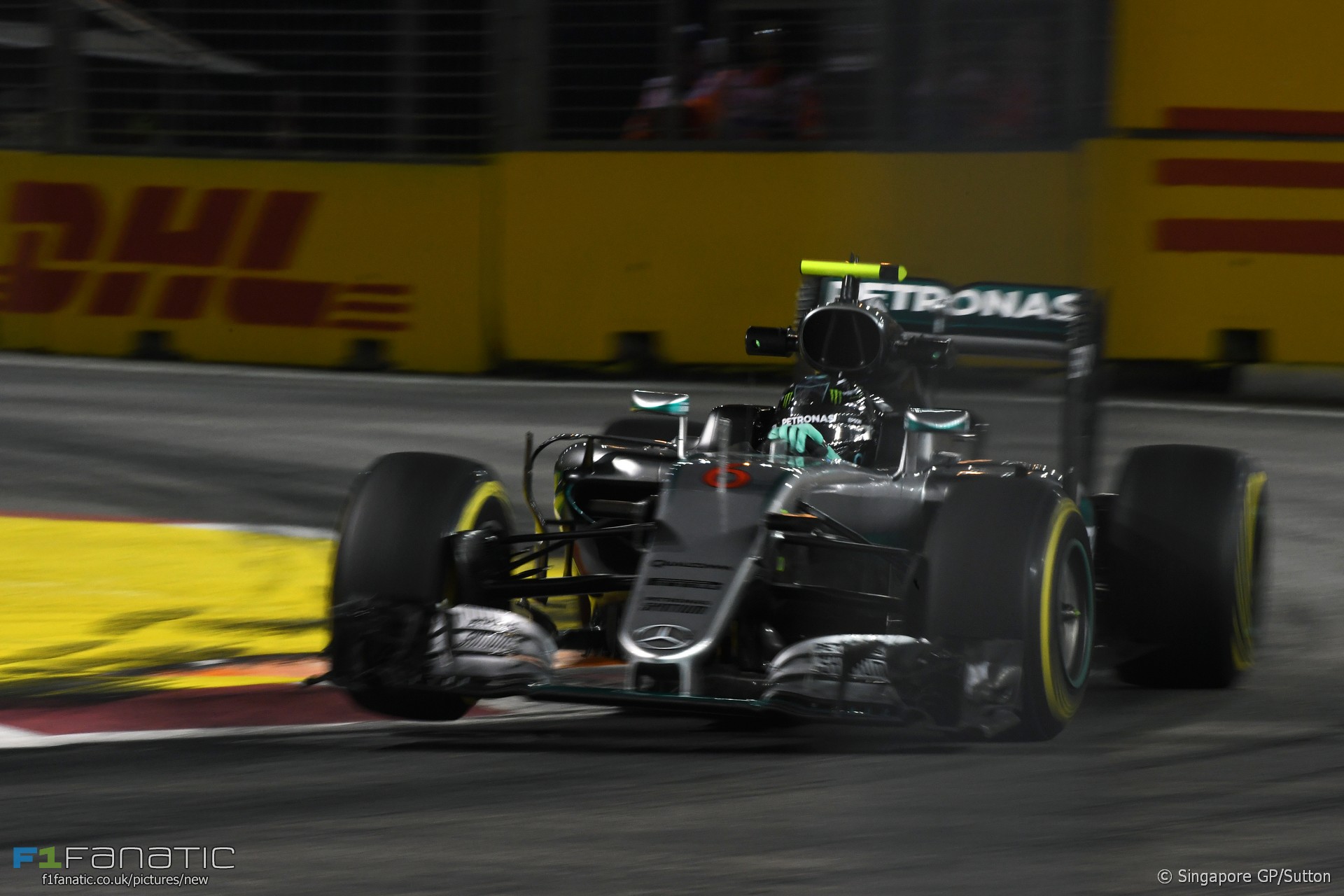 However Lewis Hamilton fell victim to a rapid final lap from Daniel Ricciardo which put one of the RB12s on the front row of the grid. Both Red Bulls will also start the race on the harder super-soft tyres.

However Ferrari hopes were dashed as a technical problem put Sebastian Vettel out in Q1.

The first phase of qualifying produced good and bad surprises for Ferrari. The first was positive: Kimi Raikkonen beat both Mercedes drivers with his run, and also pipped Max Verstappen to briefly lead the times. However he was then bumped down to second following a superb lap by Daniel Ricciardo.

However Vettel did not join his team mate in proceeding to Q2. Soon after beginning his run he reported a problem with an anti-roll bar. The inside wheel was visibly rising mid-corner, and Vettel was only able to lap within a second of the next-slowest driver. With too little time left in the session to repair it, last year’s pole sitter was doomed to start last.

His plight presented an opportunity for one of the Sauber drivers to reach Q2 and Marcus Ericsson took advantage of it. Team mate Felipe Nasr was left behind in Q1 along with the Renault and Manor pair.

After leading Q1 decisively, Red Bull opted to use the super-soft tyres in Q2 and start the race on the harder rubber. Ricciardo and Verstappen duly took their places in the final ten.

The Mercedes pair, however, revealed real pace. The W07s were over two seconds quicker than they had been in Q1, putting both cars comfortably ahead. Raikkonen in the sole remaining Ferrari was over a second slower and the Red Bulls were nearly as far behind on their harder tyres.

Two drivers slipped up on their final runs and didn’t make it back to the pits. Romain Grosjean’s Haas snapped sideways at turn ten and pitched him heavily into the barriers. Moments later a slight brush with a wall left Jenson Button with a puncture which ended his lap.

Button’s team mate made it through behind the two Toro Rossos and ahead of the Force India pair. Sergio Perez passed a car after a yellow flag during his final effort and Nico Hulkenberg made it in by just three-thousandths of a second ahead of Valtteri Bottas. Both Williams drivers dropped out as Felipe Massa had to back off due to yellow flags.

After a delayed start while the barrier Grosjean hit in Q2 was repaired, Q3 began with Red Bull and Raikkonen’s Ferrari seemingly poised to take on the Mercedes. But a superb first lap from Rosberg appeared to rule that out.

While both Red Bulls struggled on their first laps Rosberg kept it clean and went over a second quicker. Hamilton couldn’t match his team mate with his first lap either, having to settle for second to begin with.

Red Bull regrouped and sent both drivers out for another run. Verstappen, concerned about his tyre preparation, went past Rosberg on his out-lap in search of better track position. It didn’t help his cause, but up ahead Ricciardo had rediscovered some of his lost pace. A brilliant final sector moved him up to second at Hamilton’s expense.

The world championship leader had a poor final lap, running wide at turn one and taking too much kerb at turn seven. He slipped back to third on the grid.

Raikkonen put his Ferrari in fifth and the two Toro Rossos will line up behind him in tomorrow’s race.

66 comments on “Rosberg takes pole as Ricciardo splits the Mercedes”