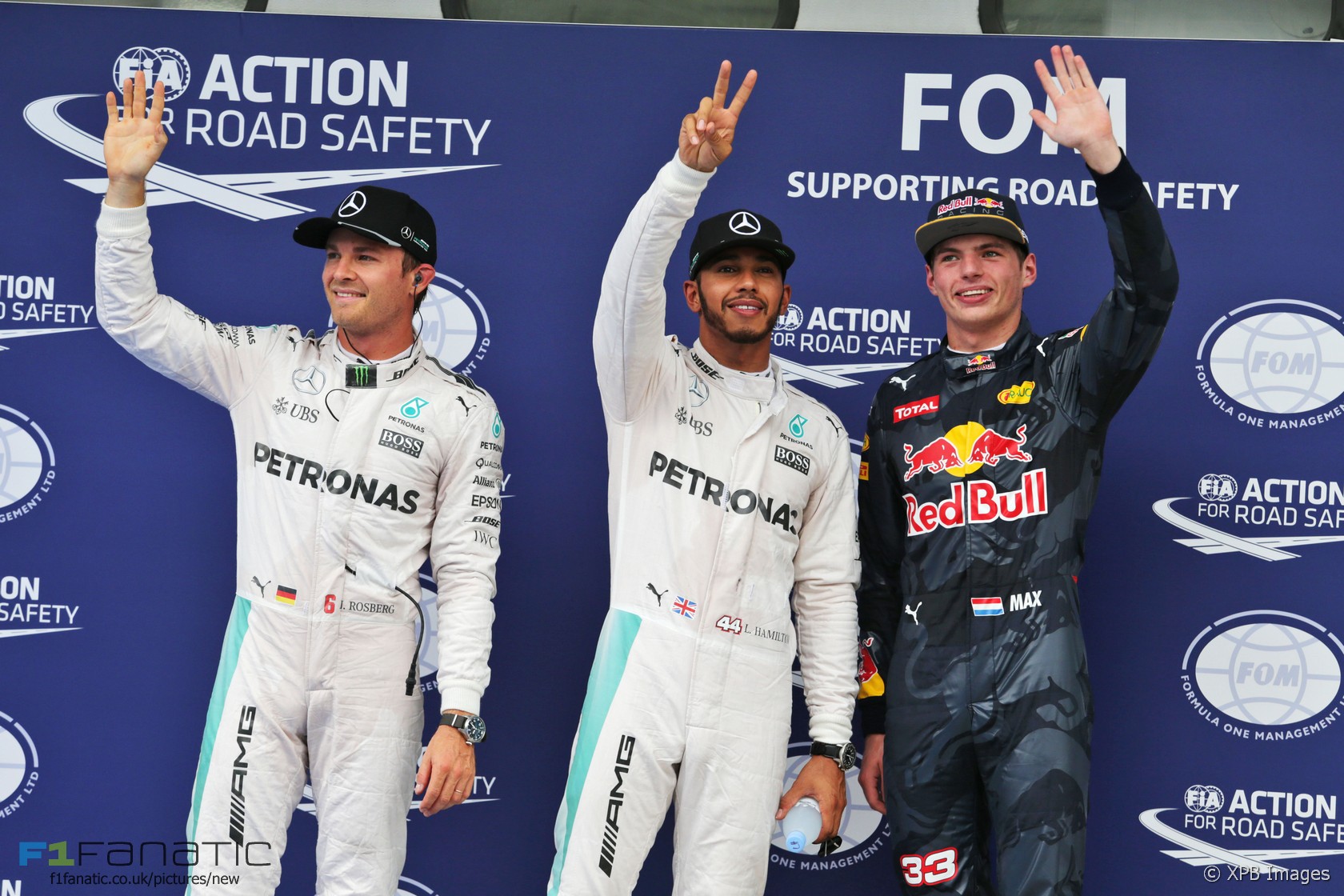 Mercedes locked out the front row of the grid as Nico Rosberg improved on his final run to beat the Red Bull drivers.

The Mercedes drivers easily secured their places in Q2 and didn’t even trouble themselves with trying to save a set of soft tyres.

The Red Bull pair secured their places in the second round using the medium tyres, though Max Verstappen rejoined the track on softs in the dying minutes as a precaution. Ferrari also hedged their bets, sending their drivers out on mediums at first but resorting to a final run on softs to ensure they weren’t left behind.

With Fernando Alonso only doing a perfunctory run on medium tyres due to his impending grid penalty, that presented an opportunity for a slower driver to grab a place in Q2.

Kevin Magnussen was the one who took advantage while Jolyon Palmer visibly struggled in the other Renault on the way to 19th.

A late improvement by Esteban Gutierrez ensured both Sauber drivers progressed no further than the first round.

The Manor pair dropped out too, and while Esteban Ocon put one over his team mate he also earned the wrath of Jenson Button, who demanded the Manor driver recieve a penalty for holding him up. Button had already spun at turn 14 after catching Magnussen on a flying lap.

It was soft tyres all around for the second phase of qualifying and Hamilton asserted himself with a lap almost half a second quicker than his team mate could manage. The Red Bull pair lined up behind them, followed by the Ferraris.

Felipe Massa’s effort was complimented by his Williams team as he secured a place in the final ten. But a mistake by his team mate at the final corner cost him dearly.

A fine effort by Jenson Button took full advantage of that mistake and ensured him a top ten starting position for his 300th race.

The gap between the Mercedes drivers swelled at the beginning of Q3 as Rosberg ran wide in turn six. Hamilton delivered another clean lap and dipped below the 1’33 mark, leaving Rosberg not far off a second behind.

The gap was filled by three cars: the two Red Bulls – Verstappen ahead of Ricciardo again – and Raikkonen’s Ferrari, Vettel only able to manage sixth with his first effort.

The final laps began with the threat of rain hanging over the track but the final minutes played out on a dry circuit. It was a relief for Rosberg, who this time managed an error-free run – until he reached the tricky, reconfigured final corner.

The final margin of four-tenths of a second indicates he didn’t lose it all with his moment of oversteer, but that will come as no consolation. Hamilton was unable to improve his time after running wide at the first corner, but he nonetheless claimed a crucial pole position.

Verstappen hung on to third place despite Ricciardo improving his time while running on used tyres. Vettel improved with his final run to take fifth place off his team mate.

Button added a second Williams scalp by beating Massa to ninth behind the Force Indias.