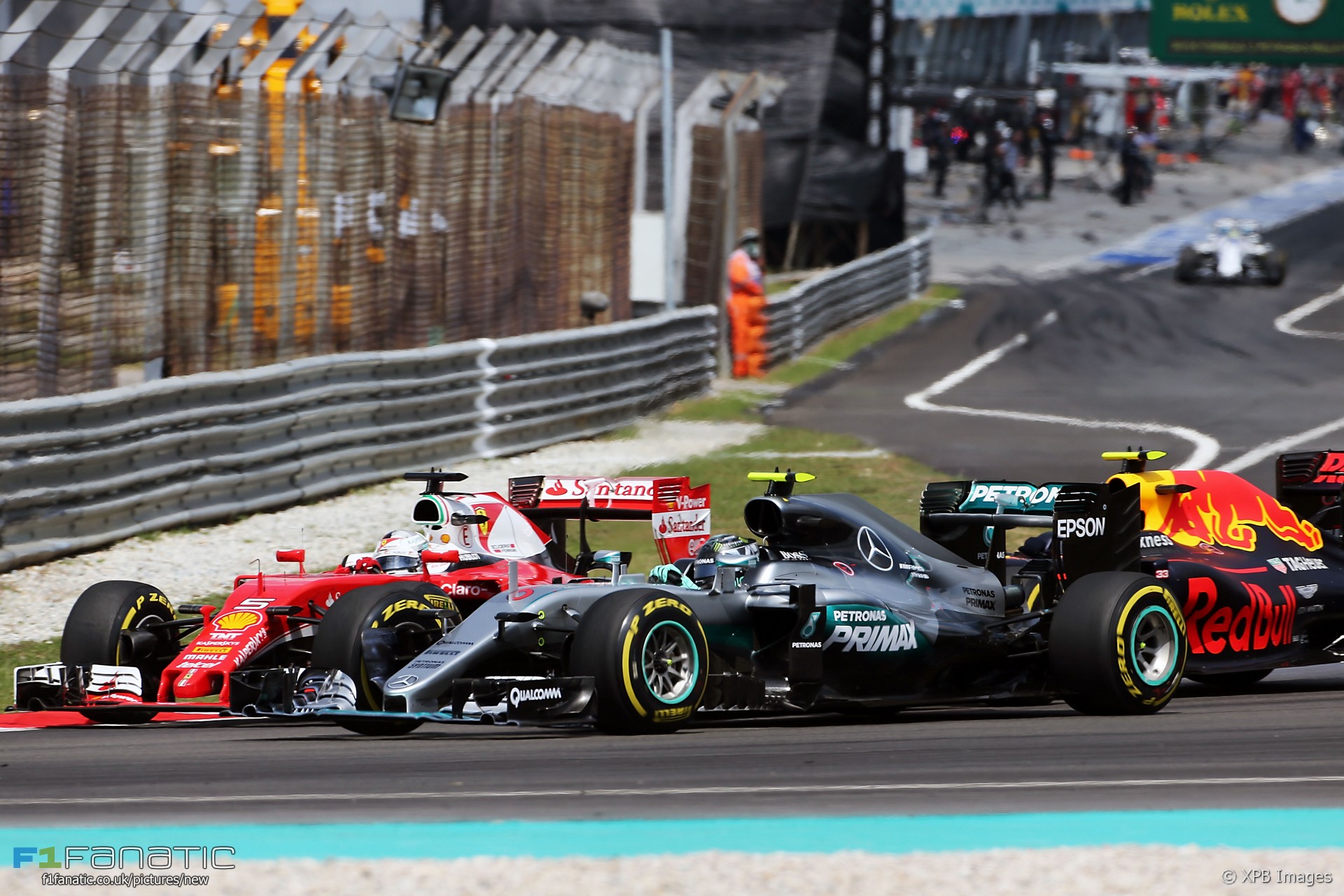 Sebastian Vettel has been given a three-place grid penalty for the next race at Suzuka for triggering a crash on the first lap of the Malaysian Grand Prix.

Nico Rosberg said Vettel was “out of control” when the Ferrari driver hit him at this first corner.

“I just got T-boned by a four-time world champion out of control,” said Rosberg.

“I though it was all over, so I’m really happy to be able to fight back in such a way all the way to the podium. That’s been great.”

Vettel was on the inside of Max Verstappen when he ran into Rosberg.

The stewards deemed Vettel was responsible for the collision:

“Having thoroughly reviewed the video and having spoken to the driver concerned, the stewards determined that although the cars involved in the incident were all moving at relatively similar speeds, the driver of car five [Vettel] made a small error entering to the inside of turn one that led to the contact with car six.”

“As a consequence, car six [Rosberg] was caused to spin from second place and loose multiple positions, which the stewards determined was predominantly the fault of the driver of car five and therefore ordered the penalty above for causing a collision.”

Vettel apologised to Rosberg for the collision, but said Verstappen had squeezed him approaching the corner.

“We had a good start, then I was going side by side with Max,” said Vettel. “We were both battling for position into turn one. Nico in the front was turning in and he obviously decided to pick his line, which is absolutely fair and in his right.”

“At that point with the speed I had I couldn’t slow down anymore and I was also pushed by Max to the right. I did my best under braking but I couldn’t avoid the impact. It was an unfortunate chain reaction which ruined my race and Nico’s one.”

“I can’t do more than apologise to Nico, because the accident had nothing to do with him being in front. I think it was different to the case in Spa with Max and Kimi, as Max and I were trying to fight for turn one, and Nico was trying to do a different thing ahead.”

Vettel was also given two penalty points on his licence for the incident.

67 comments on “Vettel gets three-place penalty for Rosberg crash”