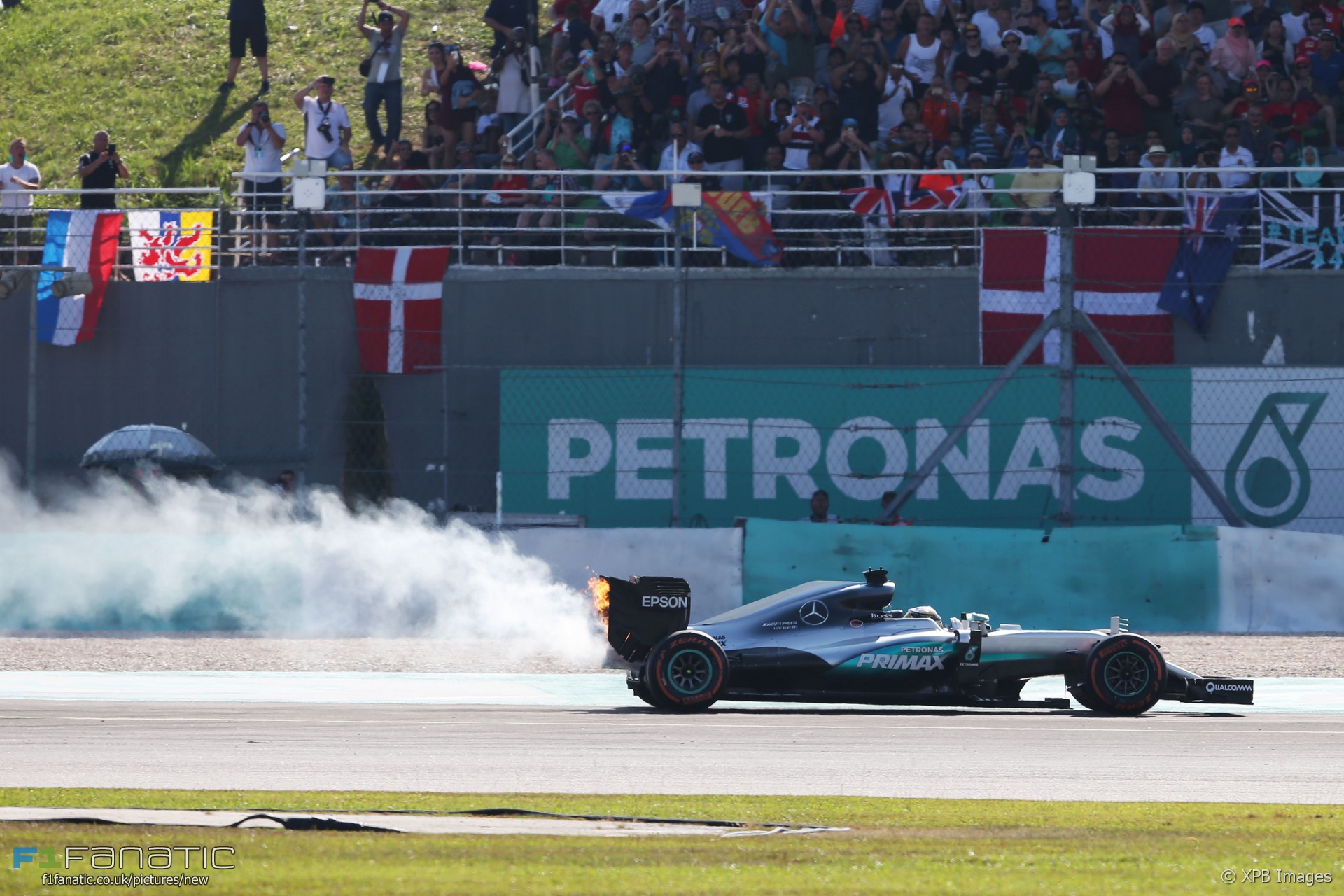 Lewis Hamilton had good reason to be frustrated after retiring from the lead with an engine failure on Sunday.

It followed a string of faults earlier this year. However it was the first time this season either Mercedes had dropped out of a race due to a technical failure.

It may come as some consolation to Hamilton to learn that he has had the most reliable cars during his career out of all of Formula One’s 32 world champions. Sunday’s DNF was the 11th time in his 183 starts so far that he has not been classified due to a technical problem. That’s a failure rate of just 6%.

The driver with the next-lowest failure rate is Sebastian Vettel on 8.7%. The other three world champions on the grid are Fernando Alonso (10.1%), Jenson Button (11.3%) and Kimi Raikkonen (13%). You can find the figures for past world champions here.

Nico Rosberg has also enjoyed an excellent finishing rate. In his 201 starts he’s had just 14 non-classifications due to technical problems: a failure rate of 7%. But even if Hamilton’s W07 broke down in each of the five remaining races, he would still have the highest reliability rate of any world champion.

Hamilton’s retirement and Vettel’s first-lap assault on Rosberg meant Mercedes missed a chance to equal McLaren’s record for the most consecutive wins by a team for the second time this year.

The Spanish Grand Prix also could have been their 11th win in a row, but Hamilton and Rosberg collided on the first lap and retired. On Sunday Hamilton’s engine failure scuppered their chances of winning for the 11th race running, although Mercedes power did achieve its 150th consecutive points-scoring finish.

It also postponed their constructors’ championship celebrations. Mercedes went into the race needing only to preserve their existing points lead over Red Bull to seal the title, but against the run of play this year they failed to do that. They will win the title at Suzuka this weekend unless Red Bull out-score them by 23 points.

With team mate Max Verstappen following him home second, they gave Red Bull its first one-two finish of the V6 hybrid turbo era. Their last came at the final race of the V8 engine era, when Sebastian Vettel led Mark Webber home at Interlagos in 2013.

Ricciardo became the fourth different driver to win a race this year, something we haven’t had in the past two seasons. However for the third year running only two different teams have won races so far.

Rosberg claimed his 20th fastest lap and Hamilton took the 57th pole position of his career. This was also Hamilton’s 100th front row start, something only two drivers in F1 history have achieved, the other being Michael Schumacher. Hamilton has started 56.4% of his races from the front row.

Finally, Jenson Button marked his 300th grand prix by qualifying and finishing inside the top ten. He is only the third driver in F1 history to start 300 races. Rubens Barrichello did 326 between 1993 and 2011, and Michael Schumacher started 306 from 1991 to 2012.

Have you spotted any other interesting stats and facts from the Malaysian Grand Prix? Share them in the comments.

181 comments on “Hamilton retains best reliability rate of any champion”