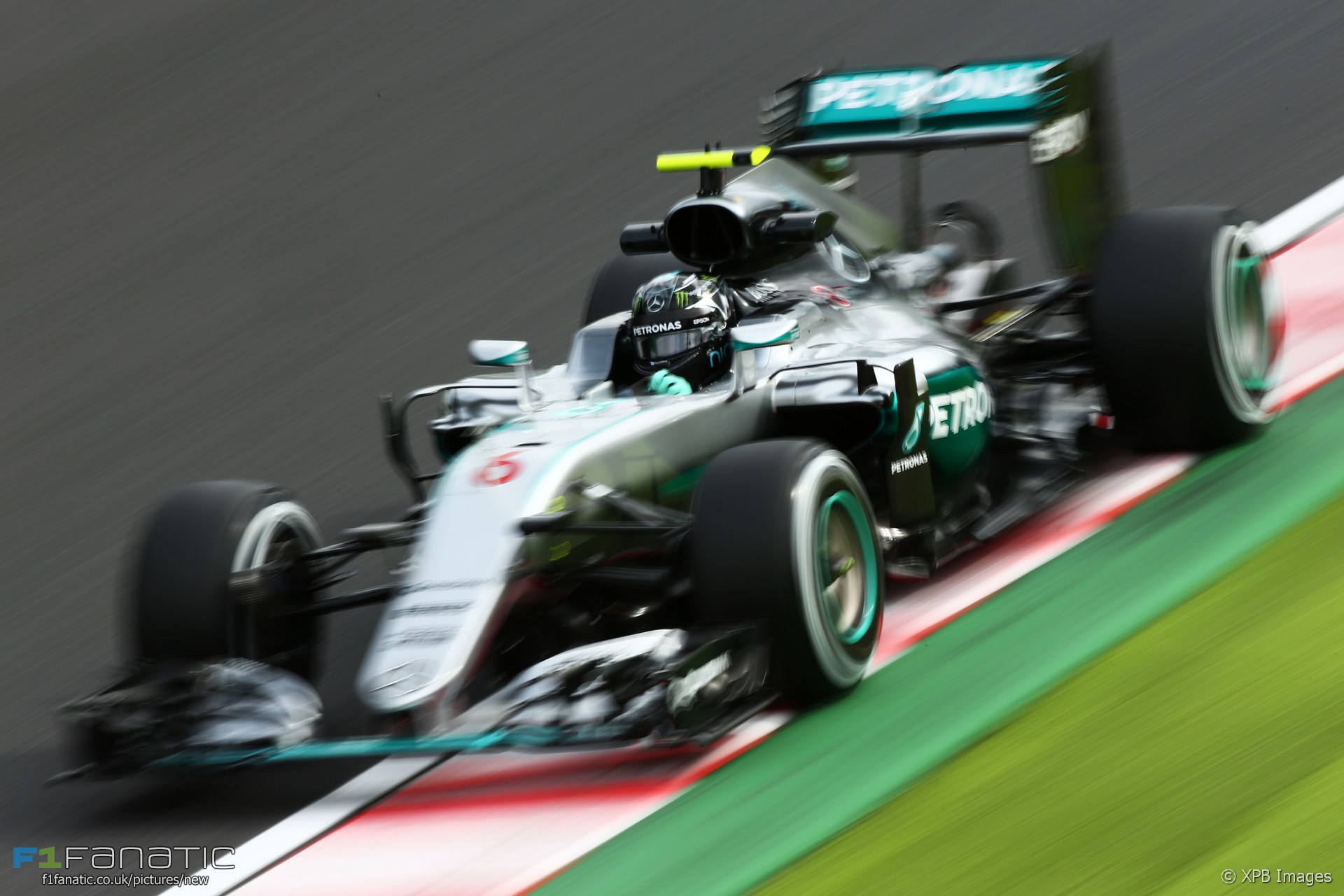 A thrilling qualifying session for the Japanese Grand Prix saw Nico Rosberg beat his team mate to pole position by a tiny margin.

Lewis Hamilton looked on course to spring a surprise on his team mate when he set the quickest time at the beginning of Q3. But Rosberg, who’d been the quicker of the pair throughout qualifying and practice, hit back with his final effort.

Mercedes marched though to Q2 without touching their stack of soft tyres. The Ferrari pair headed the times as they did use the soft tyres to proceed.

Red Bull hedged their bets. Max Verstappen and Daniel Ricciardo both ventured out on medium tyres and set times which proved quick enough for them to get through. But with the track improving quickly they couldn’t take it for granted. Both cars were duly sent back out on soft tyres, but they backed out of setting times when it became clear they would progress safely.

This was despite the chasing pack setting very close times. The McLaren drivers straddled the Q1/Q2 divide, Fernando Alonso making it through at the expense of team mate Jenson Button by just 32 thousandths of a second.

Having displayed top ten pace in final practice only one of the Renault drivers made it through. This was Jolyon Palmer, after Kevin Magnussen locked up at the chicane on his last lap.

Both Saubers and Manors also dropped out, Esteban Ocon beating Pascal Wehrlein for the second weekend running. However Wehrlein’s gearbox change penalty meant he was always likely to start last.

As is traditional, the second phase of qualifying saw Mercedes turn their engines up and blow the opposition away. Rosberg delivered another committed and clean lap, lowering the fastest time of the weekend to a 1’30.714.

Hamilton slithered wide at Degner and crossed the line four-tenths of a second slower than his team mate. Sebastian Vettel got within a tenth of his time as both Ferrari drivers out-paced the Red Bulls.

The symmetry continued behind them but it was the Haas drivers next. Romain Grosjean survived a dramatic scare at the final corner when he dropped a wheel off the track and nearly lost it.

The two Force India drivers eliminated their championship rivals Williams with their final efforts, Sergio Perez the final driver to claim a place inside the top ten. The Williams drivers matched each other to within a tenth of a second, suggesting there was little more in the car.

Mercedes, Ferrari and Red Bull were the only teams to do an initial run in Q3 – and the times closed up dramatically. All six were covered by half a second, and the battle to be bet-of-the-rest behind Mercedes was astonishingly tight. Just 56 thousandths of a second covered third-placed Kimi Raikkonen to sixth-placed Daniel Ricciardo after the first runs.

The other development after the first runs was a change in the balance of power between the Mercedes drivers. Hamilton, after a slightly slower out-lap than Rosberg, edged almost a tenth of a second from his team mate in the first sector and added to that advantage by the end of the lap. A 1’30.758 put him ahead by 0.195 seconds with the final runs remaining.

There was almost nothing to choose between the two Mercedes drivers throughout their final laps. Hamilton was quicker through the first sector by eight-thousandths of a second, but by the finishing line the initiative had swung back to his team mate. The margin was incredibly fine, however: Rosberg took his eighth pole position of the year by 13 thousandths of a second.

The gap grew between the Ferraris and Red Bulls, but Vettel’s grid penalty will drop him behind both of his former team’s cars. Verstappen out-qualified Ricciardo mostly thanks to a better run through the chicane, where he’d also been quicker in practice.

Sergio Perez and Romain Grosjean set identical times to within one thousandth of a second. However Perez set his first and therefore takes the leading position, and will gain another place from Vettel’s penalty.

76 comments on “Rosberg snatches pole from Hamilton by tiny margin”