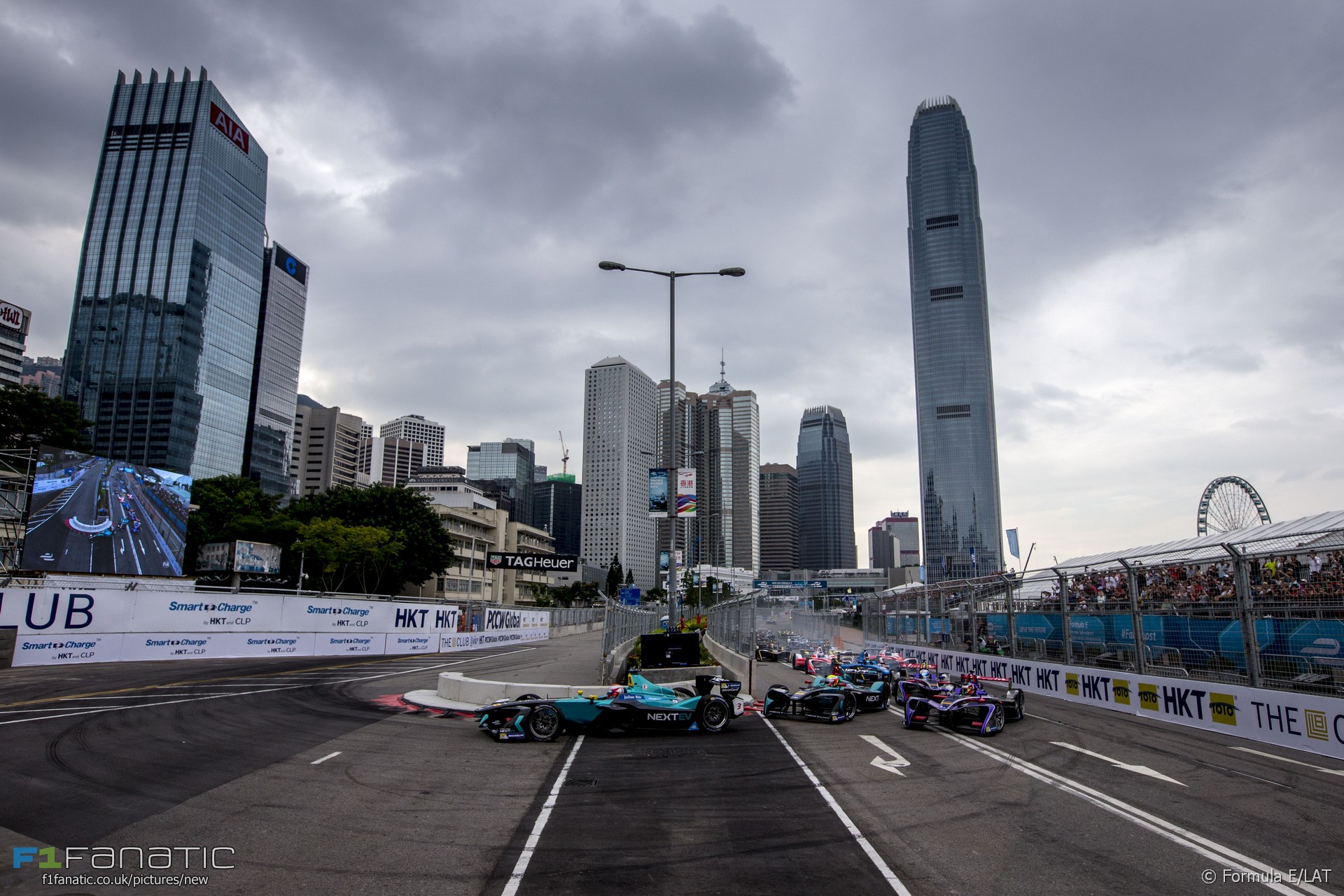 Hong Kong hosted a round of the Formula E championship for the first time as it opened the third season of the all-electric racing series.

Elsewhere the on-the-road winner of the famous Bathurst 1000 was penalised thereby losing the victory, while the first ’round of 12′ race in the chase for the NASCAR sprint car was delayed for a day due to Hurricane Matthew.

Season three of Formula E kicked off in Hong Kong with new drivers and teams in the field but the race was won by last year’s champion and the first champion started from pole position. Sebastien Buemi took victory ahead of former title rival Lucas di Grassi. Starting from fifth, a shrewd strategy from the eDAMS Renault team took him to the top in a fraught race.

2014-15 champion Nelson Piquet Jnr took pole and held a four-second lead at one stage. NextEV team mate Oliver Turvey, who he shared the front row with, held second for the first portion of the race until Sam Bird passed him. World Touring Car champion Jose Maria Lopez qualified in third in his first single seater race since 2005 but tumbled down the order after contact with team mate Bird, and eventually crashed in the turn three chicane on lap 14. Leader Piquet was just behind Lopez at this point and tapped the barriers as he dodged the incident before rejoining in third position.

This began a Safety Car period which lasted long enough for some drivers to make their mandatory car changes. Buemi was among the six drivers to pit, gambling on long stints in their second cars. Buemi rejoined behind Di Grassi, who was on an aggressive power-saving strategy after pitting having lost part of his front wing early on, but quickly got past. Bird was leading at this point, but his race was ruined when his second car wouldn’t start in the pits, and Piquet’s post-Safety Car stop dropped him to ninth.

At the front Buemi and Di Grassi eked out their power while Nick Heidfeld rose to third. Nicolas Prost took fourth, while the late-pitting Andretti team mates Antonio Felix da Costa and Robin Frijns used their energy advantages to rocket up the order fifth and sixth respectively. Jaguar didn’t score on its return to top-line motorsport, with Adam Carroll their only finisher in 12th. Next up for Formula E is a debut in Morocco in November.

Will Davison and Jonathon Webb won the Bathurst 1000 despite not leading a single of the race’s 161 laps. Jamie Whincup and co-driver Paul Dumbrell crossed the line first but were penalised 15 seconds after contact with the Garth Tander/Scott McLaughlin. That dropped Davison and Webb to 11th in the classification, but their Triple Eight team are contesting the penalty.

The Holden driver’s penalty meant the race saw the closest finish in the history of the 1,000 kilometre classic. The Davison/Webb car, which started 17th, crossed the line just 0.1434s ahead of Shane van Gisbergen in the car he shared with Lewis Hamilton’s former GP2 team mate Alexandre Premat.

Jimmie Johnson won the Bank of America 500 at Charlotte Motor Speedway, ensuring him a spot in the Round of Eight in the Chase for the NASCAR Cup. The race was postponed from Saturday due to the remnants of Hurricane Matthew passing through North Carolina.

Johnson won after overtaking Matt Kenseth on a late restart on lap 317, but had also led for 155 of the 334 lap race. Kenseth ended up in second ahead of three men out of the chase: Kasey Kahne, Ryan Newman and Kyle Larson.

Many of the title contenders hit trouble. Martin Truex Jnr stalled late on when leaving the pit lane, dropping him to 13th, while Denny Hamlin suffered an engine failure while in second with only 27 laps remaining. Polesitter Kevin Harvick suffered engine issues, while Joey Logano, Austin Dillon and Chase Elliott all scraped their cars along Charlotte’s unforgiving concrete walls. With two races remaining in the Round of 8 before another 3 contenders are eliminated, next up is Kansas City.

Nico Rosberg edged closer to a maiden Formula One world championship title with victory in the Japanese Grand Prix ahead of Max Verstappen and Lewis Hamilton, who had a bad start from second and was forced to recover places throughout the race.

What did you make of this weekends action? Let us know in the comments below.

Next weekend the big title decider is in the DTM series while it’s also the final round of the year for the Euro F3 series, however this title was decided last weekend in favour of Lance Stroll.

The World Endurance Championship is at Fuji as the season nears its climax while Sebastien Ogier will likely take his fourth world Championship as the WRC heads to Spain. In World Rallycross Matias Ekstrom could become the first driver other than Petter Solberg to win the crown in the penultimate round at the Estering in Germany and the chase for the cup continues in NASCAR.