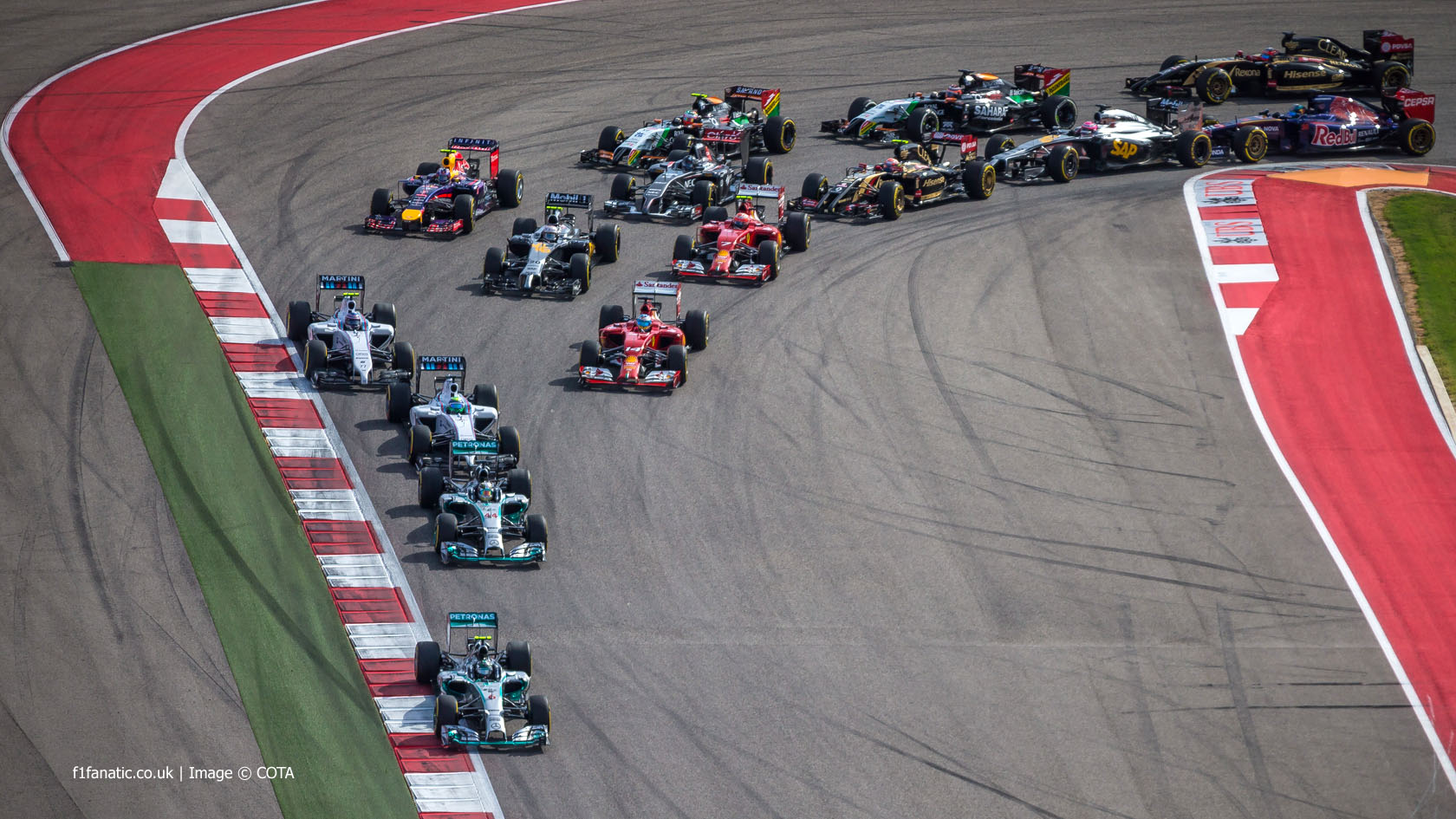 Nico Rosberg cannot clinch the championship in the USA, as Lewis Hamilton did here last year, but his 33-point lead gives him a significant advantage. Hamilton must hit back this weekend if he is to retain his title.

The draw of a legendary Texas barbeque, live music and a challenging circuit make the trip to America one of the favourites for many of the drivers and fans alike and is quickly becoming a classic race on the calendar.

The attention of the media spotlight was drawn to Hamilton’s off-track antics in Suzuka, which allowed Rosberg to focus on maximising his own performance to take a commanding victory and tightening his grip on the ultimate trophy.

Hamilton is under extreme pressure to deliver, but he can take comfort in that he has an impressive record Stateside. He’s won four times in five visits to the USA, starting with F1’s last visit to Indianapolis in 2007. He also has three victories from the four races so far at COTA, yet surprisingly has never been on pole at this track. Naturally attention will be focused on that all-important start on Sunday, made all the more difficult by the pressure of the title fight.

The situation is markedly different from this time last year, as Hamilton sealed his third world title here after a dramatic race. He made a good start and forced Rosberg wide in the first corner, only for circumstance to cause him to fall behind later in the race. In the closing stages he fought back and pressured Rosberg into a mistake, handing Hamilton the race victory and the crown.

Despite the talk of turmoil behind the scenes at Ferrari, the team are still just about able to take the fight to Red Bull. It is easy to overlook the fact Sebastian Vettel and Kimi Raikkonen out-qualified the Red Bull pair in Japan as both subsequently incurred grid penalties.

Last year in America, despite taking a ten place grid penalty for using an additional power unit, Vettel fought his way through the field and finished on the podium just behind Rosberg.

Raikkonen, however, had his first of many run-ins with Max Verstappen. Raikkonen accused the Toro Rosso driver of pushing him off the circuit, before he eventually retired with brake failure.

Leading figures at Williams including Pat Symonds and Rob Smedley have admitted that at the beginning of the year they had not anticipated having to fight with Force India. Their relative lack of success has been due to the new car failing to live up to expectations, combined with a lack of successful development through the year.

With design focus now shifted to the new 2017 regulations the final races are key to taking fourth position in the standings. They will have Mercedes’ new power unit this weekend but Force India are expected to as well. COTA is likely to prove one of the more challenging tracks of the remaining races for Williams.

Williams endured a rough weekend here in 2015 as both cars were involved in first corner collisions. Their progress back through the field was halted as they sequentially retired with rear suspension damper failures caused the bumps at turn 11.

Red Bull were able to challenge Mercedes in damp conditions here in 2015 but fell out of contention once the circuit dried out. With a more competitive power unit they should be able to aim for the podium this weekend.

Verstappen performed well on his COTA debut in 2015, finishing an excellent fourth in the Toro Rosso, his equal best result of the season. On the back of his second place in Japan last time out, impressively fending off Hamilton in the last laps of the race, he will be feeling confident of another good result.

Daniel Ricciardo will hope that a new power unit installed for this weekend will cure the problems he had in qualifying for the last two races. He has suffered a relative lack of straight line speed compared to his team mate as his engine was unable to produce the expected peak power output.

The team are fully focused on beating Williams at every remaining race this season and will look to draw on their strong performance here last year for encouragement. They locked out row three on the grid last year which was followed up by an impressive performance by Sergio Perez to finished in fifth.

The team will also look to Nico Hulkenberg to finish his second stint with the team on a high as he departs for the works Renault team for next year. His departure may pave the way for one of the Manor drivers or possibly even European F3 champion Lance Stroll should the seat at Williams not go his way.

Recent gains for Renault have seen them knocking on the door of the points once again, particularly for Jolyon Palmer who appears more comfortable than Kevin Magnussen in the car of late. An aggressive strategy and timely intervention from the safety car or adverse weather could play into their hands.

The only thing the teams’ drivers know for sure at the moment is that at leastone of them will not be driving for them next year. Their performances in the final races could determine which of them stays, though rumours point to Esteban Ocon as a likely hire for an all-new driver pairing in 2017.

This weekend may provide Toro Rosso with their final chance of points this season as the remaining circuits will stress their ageing power unit more heavily than COTA. This circuit seems to suit their chassis philosophy and a points finish might still be possible.

Neither driver fared particularly well here in 2015 as they both managed to crash in the tricky conditions. Carlos Sainz Jnr started last after his crash during qualifying, but managed to put in an impressive drive in the race to finish fifth, while Kvyat hit the barrier at the entrance to the pits after sliding over the wet kerb.

The front wing and floor upgrades introduced in Singapore are starting to provide on track improvements for Sauber, but realistically they still face the prospect of fighting the Manors at the tail of the field.

Timely intervention of wet weather may be their best hope to score that elusive first point, but with clear skies forecast for this weekend they will have to wait for that opportunity to arise.

The announcement that the team will continue to use the 2016 specification Ferrari engines for next year does not bode well for the team who are struggling to remain competitive and stay afloat despite their recent improved financial investment.

McLaren arrive in the United States in a much better position than last year, where their lack of overall performance was flattered by being able to survive a tumultuous race where Jenson Button ended up in an unexpected sixth.

Having disappointed at home in Japan the team are hoping that they can find the right balance through the twisty infield section and find a decent lap time. Button believes that as the team optimise their new, more reliable power unit there should be more scope for exploiting it’s peak performance for longer in the race.

The team do not expect to use the two remaining power unit development tokens available to them this season as they have now shifted development fully to the 2017 design.

Jordan King will take part in first practice for Manor on Friday. He has previously driven the car at both in-season tests for the team this year, but it will be the first time he takes to the track during an official session.

King is currently racing in his second season of GP2 and lies fifth in the standings having taken two race victories so far. His main task will be getting used to the car and gathering data on new components to make sure on track gains correlate with the simulator predictions.

He will be taking Pascal Wehrlein’s seat in FP1 and as neither race driver has driven at COTA before this should hand an advantage to Esteban Ocon, who seems to have settled into his new environment very well.

Haas head home to the United States on a high, having qualified both cars in the top ten for the first time in Suzuka. The circuit characteristics in Austin should also suit their car and a repeat performance is definitely possible. The aerodynamic updates introduced in Singapore have started to produce real on track gains for the American team, although continued brake problems for Romain Grosjean are still a cause for concern.

A strong finish from Esteban Gutierrez is becoming increasingly vital for him as the team are still looking for a solid reason to continue his employment into 2017. Despite his poor luck and reliability issues the disappointment of his season so far is telling and the pressure is starting to mount for the Mexican.